TORONTO (AP) — Erik Kallgren made 35 saves to earn a shutout in his first NHL start as the Toronto Maple Leafs blanked the Dallas Stars 4-0 on Tuesday night.

John Tavares had a goal and an assist for Toronto (38-17-5). Rasmus Sandin and Ondrej Kase also scored, and Mitch Marner and Morgan Rielly had two assists apiece. Ilya Mikheyev added an empty-net goal.

“Try to treat it as a normal game,” Kallgren said. “Just embrace the moment.”

With top goalie Jack Campbell out with a rib injury — he was also struggling badly before getting hurt — and a wobbly Petr Mrazek the Maple Leafs’ only other option, Kallgren got the nod for a team that entered with an NHL-worst 88.1% save percentage at 5 on 5 since Jan. 1.

“It’s a hard game to play when you’re pulling the puck out of your net all the time,” Toronto coach Sheldon Keefe said. “(But) even when our goaltenders have had some tough days, the players in front of them have a major and massive responsibility to do a good job in front.”

The 25-year-old rookie Swede, who made seven saves in relief of Mrazek in Thursday’s 5-4 shootout loss to Arizona in his NHL debut, is the fourth Maple Leafs goalie to record a shutout in his first NHL start and first since Garret Sparks in November 2015.

“He was OK,” Sandin deadpanned. “He made some really good saves. He looked really confident.

“Really happy for him.”

Sandin was one of the first Maple Leafs to learn Kallgren would be joining the team last week. The two got to know each other during some summer skates in Stockholm after Kallgren signed a two-year, two-way contract with Toronto.

“He texted me for the schedule and asked me how to get into the rink,” Sandin said. “Letting him in here, that was how I figured out he was called up.”

“This is what I’ve dreamed about my whole life, to be a No. 1 goalie in the NHL,” the 23-year-old Oettinger said. “They’ve given me every opportunity.”

Toronto was minus NHL goals leader Auston Matthews after he was suspended two games for a cross-check to the neck of Sabres defenseman Rasmus Dahlin in Sunday’s 5-2 loss to Buffalo at the outdoor Heritage Classic in Hamilton — a game in which Mrazek was badly at fault on the winning goal.

Sporting a 15-8-1 record with a .904 save percentage for the AHL’s Toronto Marlies in 2021-22, Kallgren got a nice round of applause from the crowd at Scotiabank Arena following a few early stops before the Maple Leafs took a 1-0 lead.

Keefe, forced to alter his top-six forward group, saw his new No. 1 line connect at 7:22 of the first period when Tavares — occupying Matthews’ No. 1 center role — and Marner found Sandin off the rush for the defenseman to score his fifth on the Maple Leafs’ first shot.

The home side made it 2-0 at 11:16 following an offensive zone faceoff when William Nylander’s shot struck Tavares in the skate and slid past Oettinger for the Toronto captain’s 20th.

Signed in May after helping Vaxjo HC win last season’s Swedish Hockey League title, Kallgren was solid the rest of the period before having to make a pair of nice save on Radek Faska in the waning seconds.

Toronto, which had given up at least four goals in six straight games and 10 of its past 12, killed off a trio of penalties in the second period, including a couple stops by Kallgren against Denis Gurianov.

“A lot of the saves were stuff from the perimeter,” Keefe said. “But he made sure that they just stuck to him and settled our team down. … Impressive.”

Oettinger denied Mikheyev on a breakaway to keep it 2-0 through 40 minutes.

Oettinger kept the Stars within striking distance a few minutes later with an outrageous glove save against the grain on a one-handed deflected effort from Nylander.

Dallas pushed with under nine minutes left, but the cool Kallgren was there at every turn to give Toronto some much-needed crease calm for a roster that provided its best defensive effort in weeks before Mikheyev sealed it.

“Just tried to not think too much,” said Kallgren, greeted with a water-bottle shower from teammates in Toronto’s locker room postgame.

Stars: At the Montreal Canadiens on Thursday night.

Maple Leafs: Host former Toronto goaltender Frederik Andersen and the Carolina Hurricanes on Thursday. Matthews, who has 45 goals in 56 games this season, is eligible to return Saturday in Nashville. 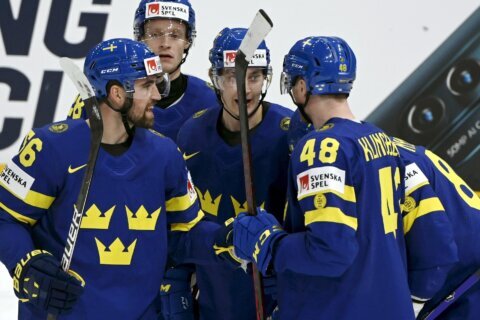