Yakov Trenin also scored for Nashville, which extended its current run to 9-1-1. The victory moved the Predators past St. Louis into first place in the Central Division with 44 points.

The Predators’ 11-game run spans an extended holiday break that saw the team miss four postponed games due to COVID issues. Since returning, Nashville is 2-1-1, having won two in a row.

“I thought coming out of the break we tried to get up to speed as much as quick as we can,” Nashville coach John Hynes said. “We talked even whether we lost the first two games coming out was just really, we gotta build our game and get back to where we were prior to the break.”

Hynes credited the players’ work ethic in practice and in the film room to getting back on track, diligence that has paid off in opening a three-game road trip with a win in one of the toughest NHL arenas.

“The quality of opponent tonight I think usually gets players ready to go,” Hynes added. “It’s a great building to play and it’s a really good team, they’re well-coached. So I think everybody — coaches and players — knew we had to be at our best.”

Meanwhile, Vegas’ offense, which produced 13 goals in the previous three games, mustered only two goals late in the third, making the game interesting, but it wasn’t enough.

The Golden Knights, on a 10-3-1 run, lost their second straight at home after falling to Winnipeg on Sunday. Despite both losses, Vegas still leads the Pacific Division — and Western Conference — with 45 points.

William Karlsson and Shea Theodore scored for the Golden Knights. Logan Thompson made his first career start and stopped 23 shots for Vegas.

After a scoreless first period in which Thompson was put to the test, with the Predators outshooting Vegas 10-8, Nashville opened a 2-0 lead in the second.

Forsberg, who’s been on a tear, received Mikael Granlund’s pass as he skated into the zone and beat Thompson under his arm on the far side early in the second.

Trenin, playing in his 100th career NHL game, made it 2-0 later in the period, redirecting Philippe Myers’ shot from the point.

Forsberg scored his second goal of the game and sixth in six games when he blocked a shot, skated into the zone and used a slick move by stopping quickly in front of Thompson and backhanding the puck into the net to make it 3-0.

Vegas tried to take advantage of a 4-on-3 power play by pulling Thompson midway through the third for a 5-on-3 edge, but couldn’t capitalize as Saros continued his splendid play.

“To win in this league at a high level you have to have excellent goaltending, and we have that with Juuse,” Hynes said. “Juuse is a premier goalie in the league, he’s very consistent, he comes up big for us when we’re under duress, when we make mistakes.”

The Golden Knights finally got to Saros in the third, cutting Nashville’s lead to two when defenseman Brayden McNabb’s centering feed was knocked home by Karlsson with eight minutes left in the game.

Theodore took advantage of a screen in front of Saros and fired a shot that made it a one-goal game with 1:46 to play.

Despite the loss, Thompson was excited after making a valiant effort in front of an announced gathering of 17,804, while starter Robin Lehner and usual backup Laurent Brossoit were both scratched with injuries.

“Four years ago I was in university,” said Thompson, whose father was in the stands to see his son start for the first time in the NHL. “I think that’s why I was just trying to soak it all in. It was really exciting. It’s a dream come true for me”

It was Thompson’s second NHL appearance, after playing 8:15 in relief of Marc-Andre Fleury on March 10.

NOTES: The Predators, whose 25 power-play goals were tied for the fifth-most in the NHL, had scored seven power-play goals in their last five contests before going 0 for 1 on Tuesday. … Karlsson’s goal was his 100th as a member of the Golden Knights. “It means a lot, I’ve wanted this for awhile now, this 100th,” Karlsson said. “It feels good to get a greasy one to get it over with. My time here as a Golden Knight has been fantastic. This has become a home.” 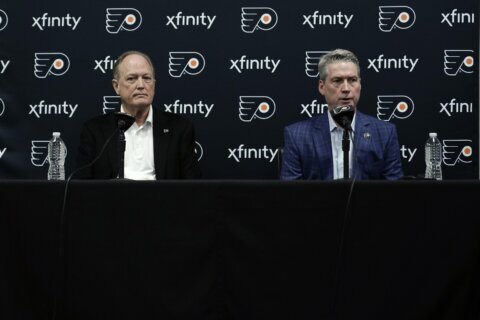