Nylander lifts Maple Leafs past Golden Knights, 4-3 in SO

LAS VEGAS (AP) — William Nylander scored in regulation and got the winner in a shootout as the Toronto Maple Leafs beat the Vegas Golden Knights 4-3 on Tuesday night.

Auston Matthews and Ilya Mikheyev also scored in regulation as Toronto improved to 5-0-1 on a six-game point streak, and 21-4-2 since opening the season 2-4-1.

The Maple Leafs have impressively weaved their way through COVID disruptions, including a two-week pause that postponed six games from Dec. 16-29, and two more games in 2022 that were sandwiched between three they were able to play.

“We just have to stay focused and be ready for whoever we’re gonna play next,” Nylander said. “It’s a part of what’s going on around the world right now and we just try to do the best we can.”

Toronto’s offense continues to thrive, having outscored teams 27-15 in the last six games. The Maple Leafs boast the league’s fourth-highest goal differential at plus-30. They also have the league’s second-best goals-against average at 2.49.

Jack Campbell made 31 saves and improved to 18-5-3 this season. He also upped his career mark against Vegas to 4-1-0.

“All year long and every single night he gives us a chance to win,” Matthews said of Campbell. “He came up really big for us tonight, just like he has all year. We got full trust in him every time no matter what the situation is, we know we got him back there. He’s always ready to make those big saves for us. He kept us in that game, he kept it tight.”

Keegan Kolesar, William Karlsson and Alex Pietrangelo scored for the Golden Knights. Robin Lehner stopped 15 shots for Vegas, which has now lost four of its last five games — all at home.

In the tiebreaker, Cambell denied attempts by Evgenii Dadonov, Chandler Stephenson and Jonathan Marchessault, and Lehner stopped Jason Spezza and Matthews before Nylander scored for the win.

Trailing 3-1 after two periods, Vegas climbed back into the game thanks to extra work by Reilly Smith’s forechecking behind the net. A loose puck squirted in front and Karlsson was there to clean things up as he came around Campbell and fired home the backhand at 1:34 of the third.

Pietrangelo tied it during a 5-on-3 with 8:12 remaining in regulation, exciting the announced crowd of 17,911.

“You always want two points, but I’m very happy how we battled back,” Lehner said. “It was a huge point for us, but it happens in shootouts sometimes.”

The Maple Leafs wasted no time in getting on the board, as Morgan Reilly’s pass down the center of the ice freed Nylander, who skated in and used a wicked deke on Lehner before firing the puck into the net for his 16th of the season to give Toronto a 1-0 lead 1:24 into the game.

Kolesar got his first career power-play point when he smacked home a rebound off the post from the doorstep, tying the game with 7 minutes to go in the period.

Toronto went ahead midway through the second period when Ondrej Kase gathered the loose puck and fed Michael Bunting, who then found Matthews at the side of the net for an easy tuck away for his 23rd with 8:17 remaining.

The Maple Leafs pushed their lead to two goals with 3:14 remaining in the second when Wayne Simmonds’ shot bounced off the end boards and right to Mikheyev for the rebound redirect.

NOTES: Vegas outshot Toronto 28-9 in the 2nd, 3rd, and OT periods. … The Maple Leafs’ league-leading power-play unit went 0 for 2 with an extra man. Meanwhile, Vegas ranked 18th in the NHL with its power play, was 2 for 5. … Nylander is now one point away from 300 in his career. … Prior to the game, Vegas added C Nicolas Ray and C Nolan Patrick along with D Shea Theodore to the COVID-protocol list. C Jake Leschyshyn, RW Jonas Rondbjerg and D Daniil Miromanov were called up to fill the roster spots. 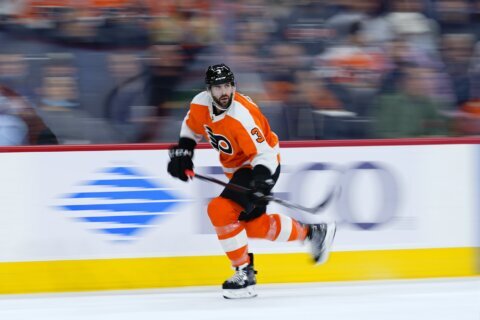