It was the first outing for Merzlikins since he allowed four goals on 15 shots in that previous game against Carolina.

“It was really important to come back and play with a free mind,” Merzlikins said. “I’m not really worried about (the loss to the Hurricanes). We had to learn and that’s what we’re doing.”

The Hurricanes were shut out for the first time this season.

“It started right from the first shift. We had a high compete level,” Columbus coach Brad Larsen said. “We did a lot of good things to keep the danger away.”

Carolina goalie Frederik Andersen gave up four goals on 32 shots before being pulled after Laine and Chinakhov scored 32 seconds apart early in the third period.

The Hurricanes were playing only their fifth game since Dec. 18. They had a scheduled game Tuesday night at Philadelphia postponed after traveling there a day earlier.

“We weren’t sharp or we weren’t going to be lights out, but that was not good,” Hurricanes coach Rod Brind’Amour said. “Not a good effort by pretty much everybody.”

For the second time in less than two weeks, the Blue Jackets held a four-goal lead on Carolina. This time, they built on that — unlike Jan. 1 when the Hurricanes rallied to win 7-4 in Columbus.

Twelve players ended up on the scoresheet.

“For our team to get back and play some winning hockey, we’re going to need everybody,” Larsen said.

Bemstrom got his first goal of the season for the only first-period scoring. Chinakhov’s breakaway resulted in the only scoring in the second as the Blue Jackets were on their way to just their second win in their last six games.

Chinakhov, a first-round draft pick by Columbus in 2020, had two goals in 25 previous career games. So he doubled his total in slightly more than 13 minutes of game time.

He now has three goals in the last three games.

“I think (Chinakhov) plays his best when he’s calm with the puck,” Sillinger said.

Jack LaFontaine was Carolina’s backup goalie, his first game as a professional. LaFontaine left the University of Minnesota when he was signed to an entry-level contract Sunday.

LaFontaine entered the game with 14:57 remaining. He gave up Sillinger’s breakaway goal on the first shot he faced.

“I hate that we threw him in for that, but he got his feet wet a little bit,” Brind’Amour said.

Antti Raanta has been the No. 2 goalie for the Hurricanes for most of the season, though he’s out with an injury. The team assigned goalie Alex Lyon to the American Hockey League prior to Thursday’s game.

Andersen joined teammate Sebastian Aho as selections to represent the Metropolitan Division at the NHL All-Star Weekend on Feb. 4-5 at Las Vegas. It will be the second All-Star appearance for each of them.

Brind’Amour already had been named as a coach for All-Star Weekend.

Defenseman Zach Werenski was picked from the Blue Jackets.

Blue Jackets: At the Florida Panthers on Saturday night. 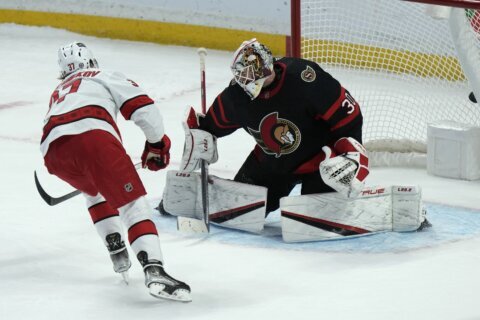 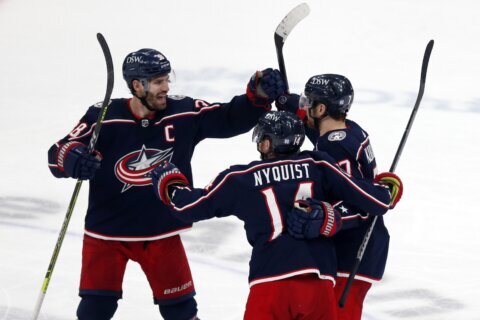 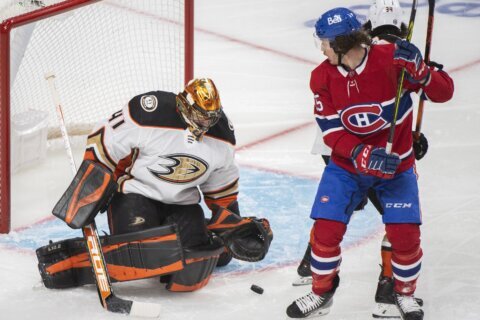