DETROIT (AP) — The Detroit Red Wings’ defense tightened up behind a strong performance from their goaltender.

Alex Nedeljkovic made 33 saves and the Red Wings ended a three-game skid with a 2-1 victory over the New York Islanders on Tuesday night.

Detroit had given up an average of six goals during the losing streak.

“I thought we were much better defensively than we had been in the last few games, and we were making chances offensively,” coach Jeff Blashill said. “We could have easily been up more than we were after two periods.”

Nedeljkovic nearly earned his first shutout of the season but the Islanders scored with 2:33 remaining after pulling goalie Ilya Sorokin for an extra skater.

“They had a lot of shots, but our guys were keeping everything to the outside, so it wasn’t as hard as it looked,” Nedeljkovic said.

Dylan Larkin got his team-high 11th goal and Michael Rasmussen also scored for the Red Wings.

Anders Lee scored and Sorokin made 37 saves for the Islanders, who had won two of three following an 11-game losing streak.

After a scoreless first period, Larkin broke the deadlock at 10:32 of the second. He scored a power-play goal with a shot from the point that deflected off Sorokin’s right arm.

Larkin has scored two more goals than he had in 44 games last season.

“I think Larks had a disappointing year and he’s said that as well,” Blashill said. “I think the long break might have helped him get away from hockey for a while and he’s been great this season.”

Nedeljkovic made a diving stop against Brock Nelson on a 3-on-1 break for New York in the closing seconds of the period.

Rasmussen made it 2-0 on a 2-on-1 rush with 7:05 remaining when he whistled a shot past Sorokin for his third goal of the season.

Lee scored with 2:33 left by deflecting in Noah Dobson’s shot.

“Our third period was really good, other than we gave up that 2-on-1,” Islanders coach Barry Trotz said. “We tried to force a play that really wasn’t there. It ended up a 2-on-1. And then we got one and tried to get it tied up and we almost did.”

“This was a huge win, because we had been playing so well and then we had that tough three-game stretch,” Nedeljkovic said. “Tonight, we were back to where we were during the winning streak.”

Islanders center Mathew Barzal, who leads the team with 17 points, was placed in COVID-19 protocol on Tuesday.

Barzal tested positive and will remain in Detroit to isolate.

“You hope he’s OK. You hope he’s not having any serious symptoms,” forward Casey Cisikas said. “As a team, we move forward. It’s a next-man-up mentality. You just do what you’ve got to do to help the team win that day.”

Barzal was making major contributions prior to being sidelined. He has a six-game point streak in which he’s contributed a goal and eight assists.

“This is an ongoing dilemma for a lot of teams,” Trotz said. “We were hoping we could get our group together and gain some traction. But it is what it is. You just deal with it. It’s part of life right now.”

NOTES: Lucas Raymond’s second-period assist gave the Red Wings forward an NHL rookie-high 25 points. … Islanders forward Oliver Wahlstrom had five shots on goal but failed to record a point after notching six points in the previous three games. … Red Wings forward Tyler Bertuzzi made his first appearance this month after clearing COVID-19 protocol. He had five shots on goal. … Detroit defenseman Marc Staal cleared COVID-19 protocol and participated in Tuesday’s morning skate, but was not activated for the game. … The Islanders will host Detroit on Dec. 29. 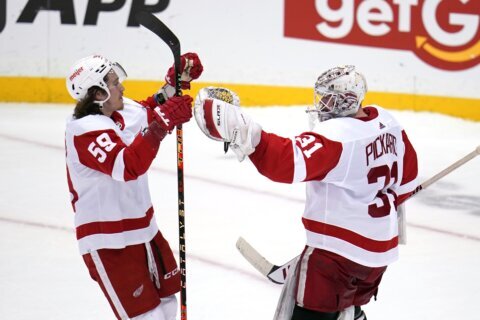 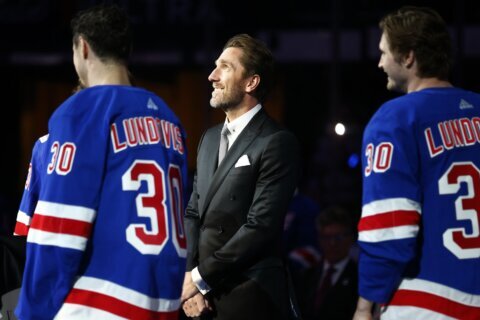