NEWARK, N.J. (AP) — If the New Jersey Devis are going to make a playoff push after a poor start, they are going to need Jack Hughes and Nico Hischier and some of their other stars to pick up their games.

They did against against Edmonton on Friday in a game in which Devils coach Lindy Ruff had to sit out after testing positive for COVID-19 hours before the opening faceoff.

Jack Hughes scored twice, including the game winner 2:55 into overtime, and Hischier tallied a goal and won a faceoff that helped set up the game-tying goal as New Jersey beat the Oilers 6-5 on Friday.

“It’s deflating for sure for a team that has the lead when they give up the goal in then the final minute,” said Hughes, who also had an assist on Yegor Sharangovich’s tying goal with 32 seconds left in regulation. “So, you know, we just scored, we’re riding high and then we had it in OT and won it. It’s deflating when you give it up, but when you score, it’s big time.”

Rookie Dawson Mercer and Janne Kuokkanen also scored for the Devils, who earned their second straight win after dropping six in a row.

“This is a good team we just we just played against,” said Alain Nasreddine, who filled in for Ruff. “You get two points against a team like that. They’re also desperate. Things have not been going well. If you want to climb back and we have put a string of wins together. We’re at two now and we’re going to move on.”

Connor McDavid and Kailer Yamamoto had two goals apiece for Edmonton, which dropped its second straight and fell to 3-8 in its last 11. Devin Shore also scored.

“It was back and forth all night and we didn’t find a way to win,” said McDavid, who has 19 goals.

Oilers goaltender Mike Smith overcame a shaky start to finish with 35 saves. He probably would have liked the game-winner back because Hughes’ shot from the top of the left circle seemed to find a way past him. Smith had stopped Hughes on a breakaway earlier in the overtime.

“It would have been nice to score on the breakaway, but got another look in OT,” Hughes said. “I haven’t watched it, but I don’t know if it snuck inside the blocker, seven-hole, whatever. I’ve just I’m trying to shoot the puck more, and you know,, the more you shoot it, more the puck can go in the net.”

The Oilers rallied to take a 5-4 lead when Shore and Yamamoto scored in a 72-second span against Mackenzie Blackwood in the third period. Yamamoto’s goal irked the Devils because they felt they controlled the puck to allow the officials to call a delayed penalty.

Nasreddine, who ran the Devils with Ruff out, challenged the call. The officials studied the replay for more than five minutes because announcing the goal could not be challenged.

“I think four of the six goals against us were at some point deflected and bounced the right direction and one bounces right direction and bounces off Smith going back in,” Oilers coach Dave Tippett said. “The tying goal goes off a stick and goes in. it’s one of those games where a lot of bounces going the other way; we just got to stick with it.”

McDavid tied it at 3 when he scored on a breakaway at 7:57 of the second period. McDavid was set up by a pinpoint pass from defenseman Duncan Keith.

The crowd at the Prudential Center didn’t miss a beat when the sound went out during the Canadian national anthem, joining in to provide the vocals until the teenager singing came back live.

Oilers: Head to New York to play the Rangers on Monday in the third of a now four-game road trip. Their game against the Islanders on Saturday was postponed because of COVID issues with the New York team.

Devils: Face the Capitals in Washington on Sunday. 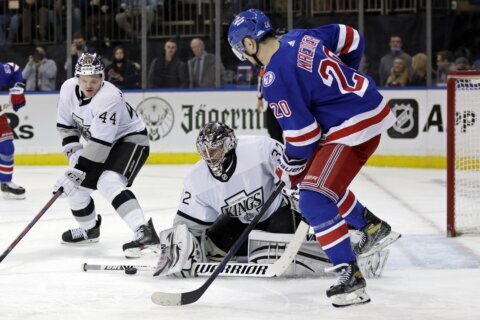