VANCOUVER, British Columbia (AP) — Bo Horvat scored twice and the Vancouver Canucks rallied from three goals down to beat the Columbus Blue Jackets 4-3 on Tuesday night for their fifth straight victory since Bruce Boudreau took over as coach.

Horvat buried his second of the game on a power play with 58.8 seconds left to put Vancouver ahead. Elias Pettersson and Vasily Podkolzin also scored for the Canucks (13-15-2). Quinn Hughes had three assists and Tyler Myers added two.

“We all talk about it and sometimes people didn’t think they had character at the beginning, but you can tell, this is a team that played the last 50 minutes with five defensemen, down 3-0, and they battled back,” Boudreau said. “The goalie battled back from a rough first period and played really solid, so it’s a team that wants to win.

“When you’ve got something like that, it’s a really special feeling for a coach.”

Eric Robinson had two goals for the Blue Jackets (14-12-1), who also got a goal from Max Domi and two assists from Alexandre Texier.

Jaroslav Halak made his first start since Nov. 28 and stopped 21 shots to earn his first win in a Canucks jersey.

Elvis Merzlikins made 35 saves for Columbus.

Vancouver went down to five defensemen midway through the first period after Tucker Poolman was pulled from the game and placed in the NHL’s COVID-19 protocol.

“I guess the test came back a little late and while he was playing, and so once the test came back, he was positive, we had to pull him off the ice,” Boudreau said. “So we just followed all the NHL guidelines and the NHL protocols and that’s what happened. It would have obviously been nicer if we had got the result before the game but we didn’t.”

Vancouver recalled Phillip Di Giuseppe from Abbotsford of the American Hockey League earlier in the day to to help bolster the depleted roster. To make room, defenseman Travis Hamonic was placed on long-term injured reserve with a lower-body injury.

The Canucks went into the third period trailing 3-1 but outshot Columbus 13-7 the rest of the way.

“I just think we believe in each other. A lot of guys are playing good hockey. Obviously, there’s just a new life, a new energy in the room. And it’s showing on the ice,” Horvat said. “I just find this team right now has no quit.”

The Canucks got a prime opportunity with only 72 seconds left on the clock when Blue Jackets defenseman Andrew Peeke was called for holding.

Vancouver called a timeout to scheme, then Horvat deflected a shot past Merzlikins to make it 4-3.

Podkolzin scored the equalizer 9:35 into the third. The Russian rookie collected the puck from Hughes and fired in a quick wrist shot.

The crowd at Rogers Arena broke into chants of “Bruce, there it is!” in a nod to Boudreau, who was hired Dec. 5.

Pettersson narrowed the deficit to one 4:07 into the third, jamming in a wrist shot off a rebound from the side of the net. It was the Swedish center’s sixth goal of the season.

With the Canucks down 3-0 heading into the first intermission, Boudreau spoke to his group about their potential.

“Obviously, (Boudreau) knows how we can play. We showed it in the first four games with him,” Horvat said. “He just kind of reiterated a lot of the good things we do when we’re successful and we obviously didn’t do that in the first period.

“We kind of picked each other up and talked as a group and proved it in the second and third. And that’s the way we want to play all the time. And that’s how we have to play for a full 60 next time.”

NOTES: The teams split two meetings this season. … Canucks defenseman Oliver Ekman-Larsson returned to the lineup after missing three games with an undisclosed injury. … D Noah Juulsen played his first game for his hometown Canucks. Vancouver acquired the 24-year-old blueliner and Lahmmikko from the Florida Panthers in a trade for Olli Juolevi in October.

Columbus: At the Edmonton Oilers on Thursday, the third stop on a five-game trip.

Vancouver: At the San Jose Sharks on Thursday. 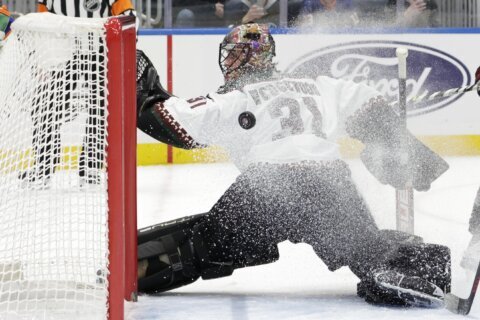 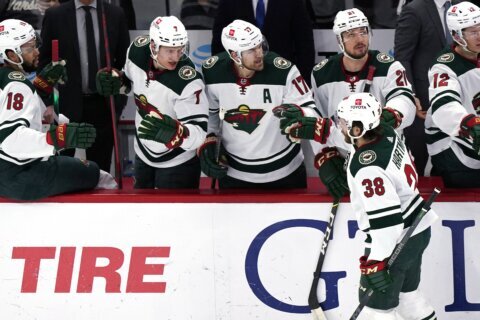