With the number of coronavirus cases and game postponements climbing, the NHL is reintroducing enhanced COVID-19 protocols that include daily testing and restrictions in a bid to limit a growing outbreak among players and staff.

The enhanced protocols will be put into effect immediately and last through at least Jan. 7, a person with direct knowledge of discussions between the NHL and NHL Players’ Association told The Associated Press on Wednesday on the condition of anonymity because the talks were private.

The person said the NHL had little choice but to increase its protocols to ensure a full, 82-game season while still taking an extended Olympic break in February.

“The virus is changing and we have to react accordingly,” the person said.

The move came within hours of an ominous step: Ontario health officials unveiled rules that will reduce capacity at the home arenas of the Toronto Maple Leafs and the NBA’s Toronto Raptors plus the Ottawa Senators to 50% starting Saturday.

The NHLPA scheduled a conference call with each of its 32 team representatives to go over the enhanced rules, with road-game restrictions — no leaving the hotel — not expected to be popular among players.

Daily testing will also return for players and coaches as part of the decision, which was reached after two days of meetings amid worsening conditions across the league. Players and staff from three more teams were added to the league’s COVID-19 protocol list Wednesday.

That included 17 members of the Calgary Flames, who also had a fourth game postponed (Saturday’s home matchup against Columbus). Coach Darryl Sutter and two assistants were on the list along with players including Rasmus Andersson, Johnny Gaudreau and others, raising the number of Calgary players in the protocol to 16.

The league said Calgary’s “return to game play is being delayed at least through Saturday” following discussions among medical experts. Calgary’s training facilities were closed to players until further notice.

Four teams — Calgary, Carolina, Ottawa and the New York Islanders — have had outbreaks force game postponements, a total of 10 in all. But alongside that is a growing number of affected players, who under typical COVID-19 guidance would be tested at least every 72 hours if vaccinated.

The person told AP the omicron variant is responsible for the uptick in cases, and is expected to become the dominant strain if the outbreak continues.

More than 140 NHL players have been on the protocol list this season — including more than two dozen in the last two days — in a league that has proudly noted all but one of its approximately 700 players are considered fully vaccinated even if booster shots are not mandated. It is a discouraging trend for the league, which plans to allow its players to participate in the Winter Olympics in China in February unless COVID-19 disruptions prove to be too much.

The NHL has until Jan. 10 to opt-out of the Winter Games without financial penalty, but retains the right to cancel its plans up until players are scheduled to travel to Beijing.

One issue for players is pinning down quarantine protocols should an athlete test positive in China, with some players express concern that they could last up to five weeks.

The NHL and NHLPA are also seeking clarity on where an athlete would be required to quarantine, the person told AP.

“I’d love to go and I’d love to compete,” said Toronto star Auston Matthews, who is American. “But there’s definitely some things that a lot of us would like to see worked out.”

In Nashville, the Predators said coach John Hynes, two assistants and six players, including Mikael Granlund and Ryan Johansen, were now in COVID-19 protocol. The news came one day before the Predators were scheduled to host Colorado.

Ontario government officials said the venue restrictions was intended “to reduce opportunities for close contact in high-risk indoor settings with large crowds and when masks are not always worn.”

The Canadian Press contributed to this report. 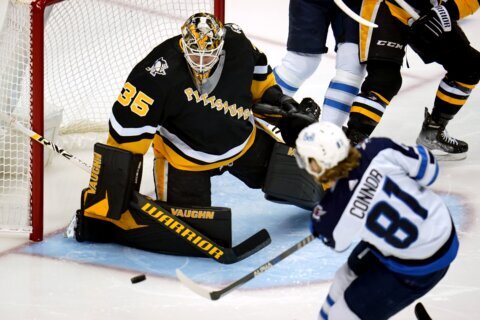