PITTSBURGH (AP) — Goaltender Casey DeSmith found his confidence and it helped the red-hot Pittsburgh Penguins to another win on Saturday night.

DeSmith stopped all 33 shots he faced, and Brock McGinn gave the Pittsburgh Penguins the only goal they needed for a 1-0 win over the Anaheim Ducks.

“The more I get in net, the more comfortable I become,” DeSmith said. “I’ve been getting back to playing my game, being on my toes, a little more athletic and not playing the stiff and boring game that I played before.”

It was DeSmith’s seventh career shutout and first of the season, and his second straight win in his sixth appearance. DeSmith played four times in the team’s first 24 games and didn’t record a win. But in his last two, he has stopped 61 of 62 shots.

“I just think his overall mindset … he’s in a better headspace,” Penguins’ coach Mike Sullivan said. “We felt like he’s been trending the right way. We know he’s a capable guy and I thought he was terrific tonight.”

McGinn scored his seventh of the season on Pittsburgh’s first shot of the game, 5:12 into the first period. He beat Ducks goalie John Gibson with a one-timer from the right faceoff dot off the rush, set up by Zach Aston-Reese with a backhand pass to the blueline.

“Anaheim is a real good team,” Sullivan said. “They won a lot of games in the last month. We knew it would be a tough challenge. They pushed down the stretch and I thought our guys competed hard.”

Ducks’ captain Ryan Getzlaf returned from injury and nearly tied the game in the final seconds, but DeSmith denied a point shot with his left pad. It ended Anaheim’s six-game point streak.

“I thought we had chances to win it,” Ducks’ coach Dallas Eakins said. “We came up short. Those sting. We take no gratification in playing well and losing by a goal.”

Gibson stopped 15 of 16 shots through two periods for Anaheim before he left with a lower-body injury. Anthony Stolarz started the third period and made 13 saves. Eakins classified Gibson as day-to-day.

Pittsburgh has allowed four goals in its last four games, and 18 goals in a 12-game span. The Penguins have nine wins during that stretch, which began with a 6-0 victory at Montreal on Nov. 18.

“Defense for me boils down to commitment and attention to detail,” Sullivan said. “Our guys have been committed to play defense. They want to win and they understand that if we want to win consistently, we can’t rely on scoring goals. We have to keep it out of our net.”

Getzlaf played for the first time since a Nov. 30 injury against Los Angeles. While he was considered week-to-week with a lower-body injury, he only missed five games. Getzlaf had three shots and won seven of 14 faceoffs in 21:25. The Ducks went 3-0-2 without Getzlaf, who recorded his 1,000th career point last month.

“I felt OK,” Getzlaf said. “There were certain situations where I was a little bit behind, I think. But overall, pretty good.”

The Penguins and Ducks have penalty-killing units ranked among the top three in the league.

No. 1 Pittsburgh has killed 30 consecutive penalties in 13 games, which continues a franchise record.

Anaheim, which ranks third, has killed eight penalties since Dec. 3, and 41 of the last 46 power plays since Oct. 29.

Ducks: Close a five-game trip at St. Louis on Sunday. 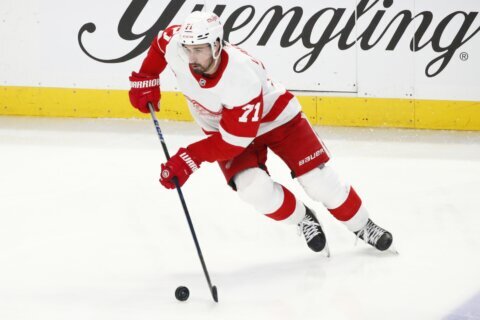