Igor Shesterkin made 20 saves as the Rangers won for the sixth time in seven games. Ryan Reaves added two assists.

“We just want to create momentum for the team,” Rooney said of the fourth line’s mentality. “We are just trying to be consistent, so the team knows what we are going to bring every night. That’s our goal, is to keep consistent and play the exact same way every night.”

Andy Andreoff scored and Semyon Varlamov stopped 17 of 21 shots, but the short-handed Islanders fell for the seventh straight game as seven players remain in COVID-19 protocol. The Islanders have yet to record a win in three attempts at their new arena next to Belmont Park.

“When it’s not going your way, you just got to keep pushing through it, keep working, keep doing those little things right, eventually it’s going to go in for you,” Islanders center Casey Cizikas said. “We just got to continue doing that and staying with our foot on the gas and not get away from it.”

Rooney helped the Rangers restore a two-goal lead 20 seconds after Andreoff pulled the Islanders within one goal early in the third period. Reaves danced around Islanders defenseman Thomas Hickey before setting Rooney up for an easy tap in at 4:12.

“The guy kind of slid early and took away the shot,” Reaves said of Hickey. “I had to try something, I knew he (Rooney) was open. It’s not a usual play for me.”

Kreider extended the Rangers lead to 4-1 at 11:02 of the third period. Mika Zibanejad and Kreider completed a give-and-go sequence to bypass Islanders defenseman Scott Mayfield. Kaapo Kakko extended his point streak to a career-long five games with an assist on the goal.

Reaves and Barclay Goodrow set up Rooney at 14:28 of the second period to give the Rangers a two-goal advantage. Recently called up Islanders forward Otto Koivula had an ill-timed neutral-zone turnover that preceded the goal.

“That’s their job, that’s what we want them to do,” Rangers coach Gerad Gallant said of the trio consisting of Goodrow, Reaves and Rooney. “They keep it simple, they work hard, they go to the net. … Our fourth line was the difference for me tonight in the game.”

The Islanders failed to score on six power-play opportunities and have been outscored 31-7 during the losing streak.

Kreider opened the scoring with his ninth power-play goal of the season 29 seconds into the middle frame. Islanders forward Mathew Barzal took an undisciplined hooking penalty seconds after the opening faceoff of the second period. Strome extended his point streak to seven games after he set up Kreider. Reigning Norris Trophy defenseman Adam Fox also assisted on the play.

The 30-year-old Kreider is off to a torrid start with 15 goals on the season and is tied with Oilers forward Leon Draistaitl for the league lead in power-play goals.

Islanders defenseman Noah Dobson is day to day with a lower-body injury. … Ryan Pulock was placed on LTIR. … Kieffer Bellows, Zdeno Chara, Andy Greene, Ross Johnston, Anders Lee and Adam Pelech remained in COVID-19 protocol. … Josh Bailey is still in Florida but is expected to return to New York this weekend after testing positive for COVID-19 following a 4-1 loss against the Tampa Bay Lightning earlier this month.

The Islanders will not spend consecutive nights on the road until they leave the Eastern Time Zone on Jan. 4 to play the Seattle Kraken. By the time the Islanders hit the Olympic/All-Star break, they will have played 25 of their 49 games at home. 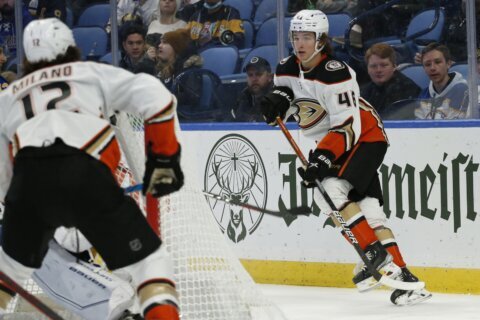 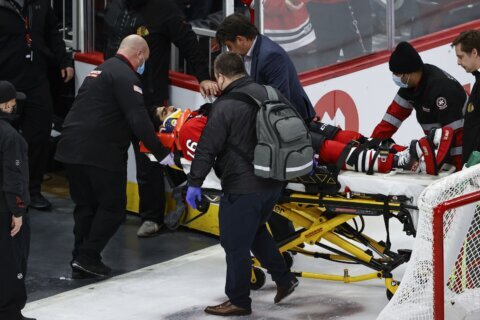 Khaira stretched off as Blackhawks lose to red-hot Rangers 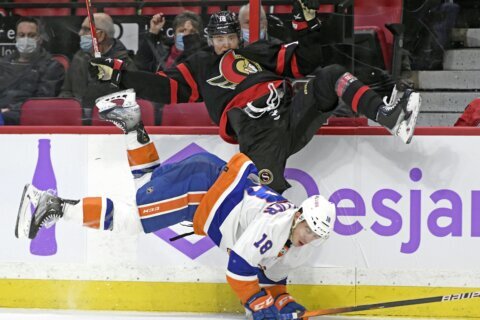