SEATTLE (AP) — Philipp Grubauer appreciates the echo of chants that come when the Seattle Kraken goaltender is making big saves.

The chants of “Gruuuuu,” were constant and well deserved Wednesday night in maybe his best performance yet with the NHL’s newest team.

“It’s special because they don’t do it for everybody,” Grubauer said. “It’s unbelievable. I love to hear it.”

Grubauer made 35 saves and Marcus Johansson beat Frederik Andersen with a wrist shot with 3:08 remaining to give the Kraken a 2-1 win over the Carolina Hurricanes.

Three nights after making a season-high 37 saves in a victory over Washington, Grubauer followed up with another terrific performance. Grubauer made 16 saves in the second period and another 11 in the third, and the Kraken picked up a second straight win over one of the top teams from the Eastern Conference.

Statistically, Grubauer was one of the worst goalies in the league for the first month of the season, but has performed far better in his past two starts.

“He’s finding the puck through traffic. He’s seeing the puck and looks very calm and settled,” Seattle coach Dave Hakstol said. “You’ve got to read some plays very well and we’ve seen that — for sure tonight.”

Seattle won its second straight to close out a six-game homestand and handed the red-hot Hurricanes just their third regulation loss of the season. It was the second straight setback for Carolina after losing to San Jose in overtime Monday night.

“Early in the year we were getting a lot of bounces going our ways and now they’re not,” Carolina coach Rod Brind’Amour said. “We play a game like that every game we’re going to have good results.”

Seattle’s Jared McCann scored on the power play at 4:16 of the second period and Johansson provided the winner in the closing minutes. Johansson circled the net, and his shot buzzed over Andersen’s left shoulder. It was Johansson’s second goal of the season and gave Seattle its first win this season when trailing after the first period.

“I saw a little bit of space between him and the post. The (defenseman) was giving me a good screen and I was just trying to get it through and it worked out,” Johansson said.

Brendan Smith gave Carolina an early lead at 18:32 of the first period when his slap shot from the point slipped past Grubauer, who was screened in front by Jordan Staal.

But that was all Carolina would get past Grubauer. Andersen made 20 saves.

Seattle pulled even in the second period as its power play that was dormant early in the season continued its rapid recovery. McCann’s goal was his fifth on the power play and the fifth straight game with a power-play goal for the Kraken. Seattle has scored on seven of its past 19 power-play opportunities after beginning the season with just three goals in 38 chances.

Grubauer was terrific when Carolina had the advantage, showing flashes of why Seattle made such a hefty investment in the goaltender. Andrei Svechnikov had a clear look off a faceoff that Grubauer kicked aside, and he made another save lunging across the goal to rob Teuvo Teravainen.

Grubauer also made a key save on Seattle’s power play, stopping Jordan Staal on a breakaway short-handed.

Grubauer was just as good in the third period making stops on a couple of odd-man rushes early in the period on turnovers by the Seattle defense.

“You got to tip your hat to their goalie,” Smith said. “I think he made some big saves and timely saves.”

Carolina played its second game without defenseman Ethan Bear, who tested positive for COVID-19 before Monday’s game in San Jose. … Vince Dunn and Svechnikov both received 5-minute penalties for fighting in the third period. Svechnikov also receiving a roughing penalty. … Johansson has five points in his past five games against Carolina.

Hurricanes: Carolina closes out its road trip at Philadelphia on Friday. 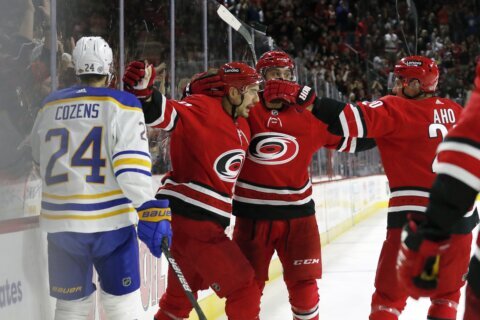