CALGARY, Alberta (AP) — Kyle Connor scored twice, including the game-winner with five minutes left, as the Winnipeg Jets snapped a five-game skid with a 4-2 comeback victory over the Calgary Flames.

Set up on a cross-ice pass from Blake Wheeler, Connor sent a one-timer into the top corner inside the near post before Jacob Markstrom could get across. Connor’s 14 goals ties him for fifth in the NHL.

Paul Stastny and Andrew Copp also scored for Winnipeg, which salvaged the final game of its three-game road trip. Wheeler had two assists and Connor Hellebuyck had 34 saves.

“It’s easy to sulk and feel pretty crappy about the one last night,” Mark Scheifele said about the club’s 7-1 loss in Minnesota. “We all put our big boy pants on and came to play tonight and it was a lot of gutsy efforts and a lot of blocked shots and a lot of taken hits, made hits, and that’s what it takes in the league.”

“It was fun being back with the boys,” Scheifele said. “I’ve played a lot of games with those guys and we’ve had a lot of big games. We’ve had some fun together. It was nice to get on the scoresheet and get some big goals.”

Matthew Tkachuk and Elias Lindholm scored for Calgary, which lost in regulation for the first time in eight games. Markstrom had 24 saves.

“We played a really good game, but we made a couple of mistakes and they ended up in our net. We didn’t finish enough opportunities,” said Calgary coach Darryl Sutter.

The Jets had a chance to take the lead with the score tied at 2 and under five minutes remaining in the second period. Milan Lucic was assessed a major penalty for boarding and a game misconduct for a heavy hit along the end boards that temporarily shook up Jets defenseman Dylan DeMelo.

But Calgary prevented the Jets from being able to set up. With just over a minute remaining in that power play, the Flames drew a hooking penalty on Neal Pionk, which ended the extended five-on-four during which Winnipeg generated only two shots.

Down 2-0 early, Winnipeg cut into the deficit with 3 1/2 minutes left in the first when the Jets turned a stretch of sustained pressure into a goal with Connor knocking in a set-up from Wheeler.

The Jets tied it 2-2 at 4:50 of the second on a goal that left Markstrom visibly upset, believing there was goaltender interference. With the puck in the crease, Stastny knocked both Markstrom’s pad and the puck into the net at the same time. Calgary did not challenge the call.

The Flames jumped out to an early lead with Tkachuk deflecting in Johnny Gaudreau’s centering pass 26 seconds into the game.

It was the NHL-leading 17th time Calgary has scored first.

Calgary was a perfect 3 for 3 on the penalty kill and is now 26 for 27 over the last eight games. The Flames entered the night ranked third in the NHL on the PK. … Winnipeg had been 0-3-0 on the back-end of back-to-back games. … The Flames lead the Western Conference standings after 20 games for the first time since 1993-94.

Flames: Wrap up a three-game homestand Monday against Pittsburgh. 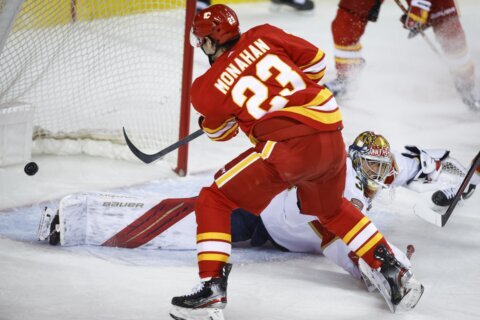 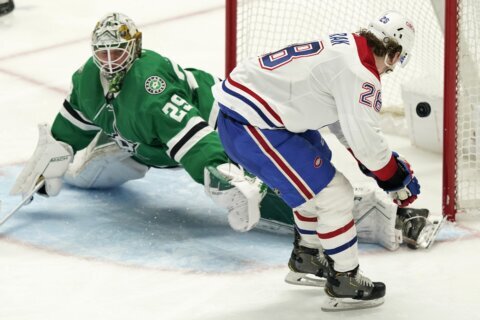