LAS VEGAS (AP) — Sebastian Aho had a goal and an assist and the Carolina Hurricanes beat the Vegas Golden Knights 4-2 on Tuesday night.

It was a matchup of two of the hottest teams in the league, as Carolina opened the season 11-2-0 and the Golden Knights came in riding an 8-2-0 run since starting the campaign 1-4-0. In the end, Carolina’s depth and speed on all four lines were too much for Vegas.

Jarvis, Carolina’s rookie 19-year-old playing in his seventh career game, got the game-winner when he fired home a rebound that caromed off Vegas’ Evgenii Dadonov. Sitting on the inside edge of the left circle, Jarvis one-timed the loose puck from the slot into a wide-open net at 1:11 of the third period to break a 2-2 tie.

Along with his goal, Jarvis finished with three shots and a blocked shot in 14:12 of time on ice while skating with the top line of Aho and Andrei Svechnikov, continuing to leave an impression he deserves his spot on the roster.

“I think scoring goals is nice, but it’s all over the puck, it’s away from the puck, what I do defensively, how much trust (coach Rod Brind’Amour) can put in me,” Jarvis said. “So as long as I keep playing the right way, taking in consideration what they’re talling me, what the players are telling me and just improving every game, I think I’ll make the case a little bit harder.”

Trocheck knocked in the rebound of a Teuvo Teravainen’s shot from the slot to put Carolina up 4-2 with 6:19 remaining.

After splitting their last four games, the Hurricanes opened their season-high six-game road trip with a win against a Vegas team that had been rolling despite injuries to some of its top skaters and COVID issues.

“I think as a team, we kept things simple for the most part,” Trocheck said. “We had some lapses in the second, but we got back to our game right after that and stayed with it the whole time. That’s the recipe for us.”

Looking crisp from every aspect — skating, defending, passing — Carolina zipped through and around Vegas early on, leading up to DeAngelo opening the scoring.

Martin Necas sent a cross-ice pass to DeAngelo who skated to the bottom of the right circle and beat Lehner short side to put the Hurricanes on top, 1-0, with just under 9 minutes left in the first.

Carolina extended its lead just before the end of the opening period when Lehner stopped a one-timer by Teravainen on a power play, but Aho was in the right spot to tap home the rebound with 57 seconds left.

Howden breathed life into the relatively quiet crowd 2:53 into the second when he raced by teammate Reilly Smith’s big brother, Carolina defenseman Brendan Smith on the right side, and then beat Raanta by roofing a breakaway to cut the Hurricanes’ lead in half.

A little more than a minute later Theodore sent the announced crowd of 17,737 into a frenzy when his persistence paid off on his third attempt of one sequence. Fed a one-timer by captain Mark Stone, Theodore followed consecutive wrist shots stopped by Raanta deep into the offensive zone and tapped home the loose puck on the doorstep to knot the game at 2-all.

It was all the Knights could do from that point.

“They’re a good team, they don’t really give us much,” Stone said of the Hurricanes. “Forecheck hard, they got a good defense, they come at you in waves, but I don’t think anybody’s gonna feel sorry for the Vegas Golden Knights in this league. The success we’ve had in four years, nobody’s feeling sorry for us. So we gotta find ways to generate points, generate wins.”

NOTES: Golden Knights forwards Jonathan Marchessault and William Carrier are in COVID protocol. … Theodore leads all Golden Knights against Carolina, with seven points (4 goals, 3 assists) in seven games. … Smith has also chipped in five points (2 goals, 3 assists) in seven games. … Aho has posted six points (4 goals, 2 assists) in six career games against Vegas. … Trocheck has recorded eight points (2 goals, 6 assists) in seven career games against Vegas. … Already dealing with a multitude of injuries, Theodore and Dadonov left the game and did not return. Theodore slammed his head into the end board, while Dadonov’s face was cut open after being hit by a stick.

Carolina: At Anaheim on Thursday night. 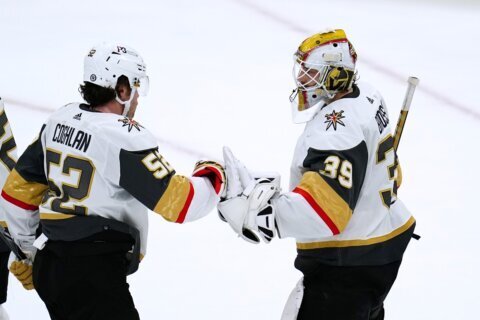 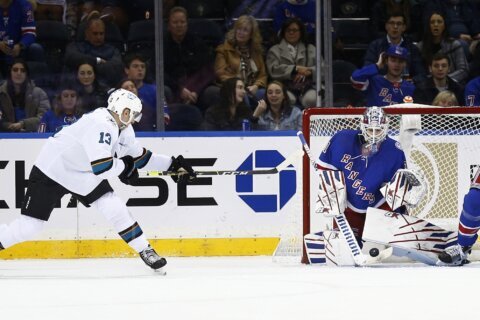