Heiskanen, who also had an assist, took a lead pass from Jamie Benn, swooped in on goalie Igor Shesterkin and buried a high shot to give the Stars a victory in their first game of the season.

“I went high blocker and it went in,” Heiskanen said.

Adam Fox and Chris Kreider each had a goal for the Rangers, who lost their season opener Wednesday night at Washington. They’ve dropped four of their last six home openers.

Holtby, the longtime Capitals goaltender, joined the Stars this year after Vancouver bought out his contract after one season. The 32-year-old netminder spent 10 seasons with Washington, winning the Stanley Cup in 2018 and the Vezina Trophy in 2016.

After making 25 saves, Holtby was replaced by Khudobin with 11:53 left in the third period. Holtby’s helmet was knocked off during play several minutes earlier.

Dallas coach Rick Bowness said after the game that Holtby was dealing with dehydration.

Khudobin, who helped the Stars reach the Stanley Cup Finals in 2020, made six stops — including two on Mika Zibanejad and another point-blank save on Ryan Strome during a Rangers power play late in the third. Khudobin earned the victory in relief of Holtby.

“They both played outstanding,” Bowness said.

Dallas opened the scoring with 35 seconds left in the first on an unassisted goal by Peterson, the rookie forward’s first in the NHL. The 22-year-old Peterson lifted a high backhand past Shesterkin.

“It’s a dream come true and it was a really good game,” Peterson said. ”This was a special moment.”

Faksa made it 2-0 with a power-play goal at 6:11 of the second, assisted by Heiskanen and fellow defenseman Ryan Suter.

The 36-year-old Suter, playing his 17th NHL season, also made his Dallas debut after his contract was bought out by Minnesota.

“We found a way to win,” veteran forward Joe Pavelski said. ”We weathered the storm on the road at MSG. Awesome on the guys with Dobie coming in and making great saves.”

A night after the Rangers were drubbed 5-1 by Washington, they mustered little early against Dallas — their first non-division opponent since March 2020 before the pandemic halted play.

Fox finally broke through on New York’s ninth shot on goal midway through the second. Fox, who won the Norris Trophy as the NHL’s best defenseman last season, awakened the crowd with his first goal of the new season at 8:43. Artemi Panarin and Ryan Lindgren assisted.

The last time the Rangers played in front of a full home crowd was March 7, 2020, when they lost to the Devils.

“It doesn’t beat having fans at The Garden,” Fox said. ”Anytime you hear them, you get a little momentum from it.”

The Rangers picked up their pace after that and tied it at 15:54 of the middle period when a shot through traffic was tipped past Holtby by Kreider for his second goal in two games.

K’Andre Miller and Zibanejad had assists.

The Rangers outshot the Stars 18-8 in the middle period.

In the third, the teams traded chances but neither could score as New York held an 11-8 shots advantage.

The Rangers opened their home schedule with a new look behind the bench and on their roster.

Gallant made his home debut after replacing David Quinn, the team’s coach for the past three seasons who was fired in May.

“I liked a big part of our game tonight. We simplified things,” Gallant said. ”We bounced back. We got our nose dirty. We got back in the hockey game. We’re like every other team: It’s early in the season. It’s a work in progress.”

Gallant said he enjoyed his first game coaching in front of the New York crowd.

“It was fun,” he said. “The ceremony before the game was really nice. The fans get going here pretty good. I was pretty excited to coach.”

Dallas defenseman John Klingberg was knocked out of the game 3:31 in when he fell backward awkwardly as he collided with Kreider behind the Stars net. Klingberg played several more shifts but was later ruled out with a lower-body injury.

The Rangers honored Hall of Fame forward Rod Gilbert before the game, with all players wearing Gilbert’s vintage white No. 7 home sweater during warmups. The franchise’s all-time leading scorer died in August at age 80. His wife, Judy, dropped the ceremonial first puck.

Former Rangers goaltender Henrik Lundqvist, who retired in August, debuted as a studio analyst for the team’s broadcast on MSG Network. The 39-year-old Lundqvist owns virtually every team record for goalies, including 459 wins, sixth-most all-time, after a 15-year career with the Rangers. He will have his No. 30 retired on Jan. 28 at The Garden. 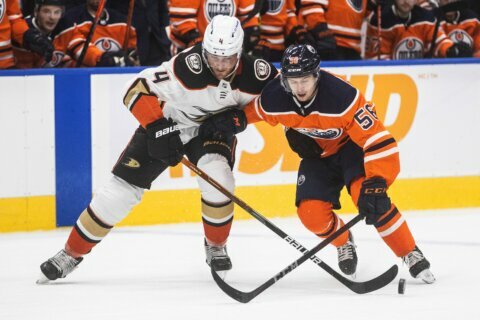 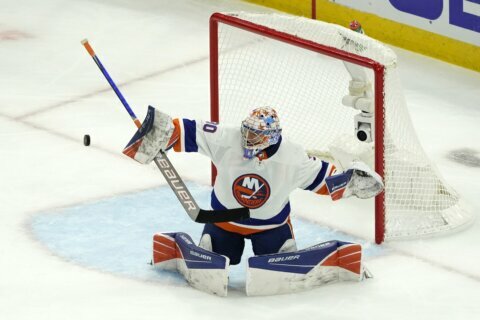 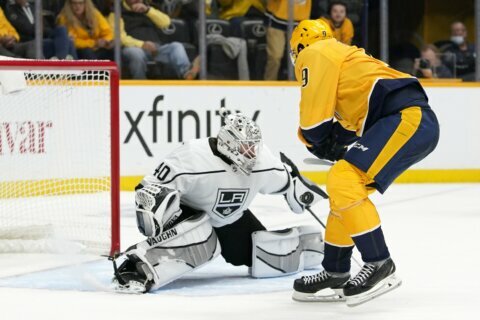