PITTSBURGH (AP) — The Pittsburgh Penguins were missing several key regulars, but they didn’t have any problem with a high-powered Toronto team stuck in an early slump.

O’Connor, who is tied for the NHL scoring lead among rookies, got his second and third goals of the season. Marcus Pettersson also scored and added two assists for a career-high three points. The Penguins, playing without five of their best players, including Sidney Crosby, Evgeni Malkin and Kris Letang, broke a 1-all tie with a four-goal second period.

“This organization has been very successful for a long time,” Penguins coach Mike Sullivan said. “Part of that is that there’s an expectation to win every night regardless of who is in your lineup.”

Evan Rodrigues scored his third goal, while Jason Zucker and Brian Boyle both got their second of the season. Mike Matheson also scored his first for Pittsburgh, which has 23 goals, produced by an NHL-most 14 different players this season.

Tristan Jarry made 28 saves for the Penguins, who have scored at least four goals in all but one game this season.

“We’ve been in this situation before with a lot of guys missing,” Pettersson said. “When you have a great system and everyone trusts it, I think it shows, and it did tonight.”

“The mood ain’t great,” Maple Leafs defenseman Jake Muzzin said. “You lose like that, it’s not a good mood. But it’s early in the season. It’s a test for us. Let’s see how we respond.”

Pittsburgh opened the scoring at 11:53 of the first when Pettersson’s point shot hit O’Connor and went into the net. Spezza tied it 51 seconds later when he flipped a rebound over an outstretched Jarry from the side of the net.

Then, the Penguins took over.

Pittsburgh opened a 3-1 lead with goals on its first two shots of the second period. Matheson scored on a wraparound at 1:38 and Zucker added another goal 15 seconds later. Zucker’s shot from the left-side wall hit off the skate of Toronto defenseman Timothy Liljegren and beat Campbell to the near post.

O’Connor scored his second of the game in a similar fashion at 11:01. His centering pass on a 2-on-1 hit Muzzin’s skate and went into the net. Pettersson gave Pittsburgh a 5-1 lead at 13:59 with a wrist shot from the slot off the rush.

Boyle scored 20 seconds into the third and Rodrigues added a power-play goal at 2:24.

“(Pittsburgh) did a lot of things right,” Muzzin said. “It started with outworking us. That just fueled them.”

Letang didn’t play because he was in COVID-19 protocol. Sullivan said Saturday morning that Letang had a positive test, but it wasn’t a confirmed positive.

Pittsburgh also played without Crosby (wrist surgery) and Malkin (knee surgery), in addition to Bryan Rust (lower body) and Jeff Carter, who was also in COVID-19 protocol. Rodrigues, who normally plays on the team’s third or fourth line, was Pittsburgh’s top center against Toronto.

The Penguins last played a regular-season game without Crosby, Malkin and Letang on April 9, 2017, against the New York Rangers. That game was also Jarry’s first NHL start.

“I think the players deserve so much credit because they set the standard,” Sullivan said. “No one looks for excuses. I think everyone rallies around it and tries to make a difference.”

Toronto has lost four of its last five games.

The Maple Leafs, who lost 5-3 against San Jose on Friday, have allowed 12 goals over the past two nights. On offense, Toronto has scored 12 goals in its first six games.

Auston Matthews, who returned from offseason wrist surgery in Monday’s overtime loss to the Rangers, is without a point in three games. In six games, Mitch Marner, the Maple Leafs’ leading scorer last season, has one assist, while John Tavares has a goal and three points.

“We have a lot of hockey left to play,” Tavares said. “No doubt we have to respond.”

Kasperi Kapanen was originally selected by the Penguins in the first round of the 2014 NHL draft, but he spent his first five seasons in the Maple Leafs’ organization following a trade that sent him to Toronto in exchange for Phil Kessel in July 2015.

Kapanen, reacquired by Pittsburgh on Aug. 25, 2020, hadn’t played against his former team until Saturday because of last season’s division realignment.

In 202 games, Kapanen scored 41 goals and 90 points with the Maple Leafs. Kapanen, who had two assists on Saturday, has 11 goals and 34 points in 45 games with Pittsburgh.

Penguins: Continue an eight-game homestand, their longest of the season, Tuesday against Tampa Bay. 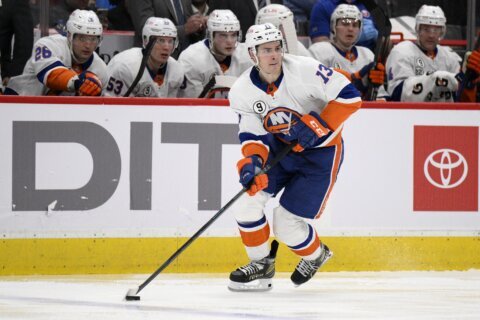 Islanders agree to terms with Barzal on 8-year extension 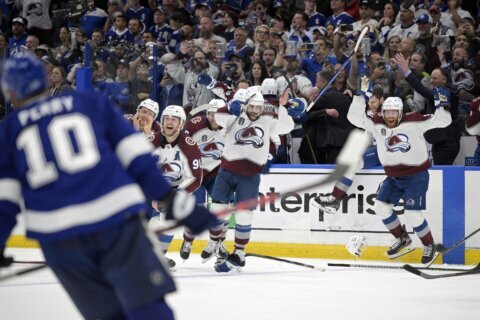