ANAHEIM, Calif. (AP) — In the span of 4 hours, Mason McTavish went from being a gameday scratch to becoming the youngest player in Anaheim history to score a goal.

The 18-year-old McTavish scored less than 14 minutes into his NHL debut as the Ducks opened the season with a 4-1 victory over the Winnipeg Jets on Wednesday night.

“I definitely couldn’t have dreamed it any better, to be honest with you,” said McTavish, the third overall pick in this year’s NHL draft. “Obviously with the win and the goal, it was definitely one I’ll never forget.”

McTavish was told during the morning skate that he would not be suiting up. But those plans changed 3 hours before faceoff when coach Dallas Eakins called him quickly back to Honda Center after Max Jones couldn’t go due to illness.

“He got right over, prepared and played a hell of a game,” Eakins said. “I gotta tell you, that is the fun part of being a coach. An 18-year-old kid comes in, he’s hung around long enough to make your opening roster, he gets a little adversity thrown his way and then he has a hell of a night. That’s a real privilege of coaching not only for me but for those other guys in there as well.”

McTavish put in a loose puck 13:20 into the first period to give Anaheim a 2-0 lead. Jets goalie Connor Hellebuyck made a pad save on a shot by Isac Lundestrom, but McTavish gathered in the rebound.

Officials originally ruled no goal because the whistle had blown, but replay overturned it as the culmination of a continuous play where the result was unaffected by the whistle.

“I knew it was a good goal, but the ref was saying he might have blown the whistle too early,” McTavish said. “There was no goalie interference or anything like that. So it was just kind of hoping.”

At 18 years, 256 days old, McTavish surpassed the previous franchise mark set by Oleg Tverdovsky (18 years, 259 days) on Feb. 1, 1995, at Dallas. McTavish is the second-youngest player to score within 15 minutes of his NHL debut in more than 25 years (Columbus’ Nikita Filatov did it on Oct. 17, 2008, vs. Nashville) and the sixth-youngest in NHL history.

McTavish also had an assist on Adam Henrique’s power-play goal during the second period that extended the Ducks’ lead to 3-1.

With two points in his debut, McTavish was unsure if playing on short notice ended up benefiting him.

“I kind of thought I was done for the day. I guess I just didn’t think about it as much, so maybe that helped. I don’t know, but definitely it was a little bit different,” he said.

Kevin Shattenkirk and Rickard Rakell also scored for Anaheim, which has won four of its last five season openers. Lundestrom and Jakob Silfverberg both had two assists, and John Gibson made 33 saves,

Kyle Connor scored Winnipeg’s goal with a one-timer from the right faceoff circle less than four minutes into the second. Hellebuyck stopped 18 shots.

“I scored there to get us back to (within) one and I felt we were just stretching a little bit too much after that. We weren’t supporting our defense and coming up as a unit,” Connor said.

Shattenkirk scored Anaheim’s first goal of the season with a wrist shot from the right wing near the boards that Hellebuyck was unable to see after being screened. It was Anaheim’s first shot on goal after the Jets took the first seven.

Rakell’s redirect of Jamie Drysdale’s shot from the point six minutes into the third period marked the first time in 19 months the Ducks scored twice on the power play in regulation. Anaheim had the league’s worst special teams last season and had only one game when it scored two goals with the man advantage. That second score, though, was in overtime against Colorado.

“Our penalty kill got what we deserved,” Winnipeg coach Paul Maurice said. “There was more dangerous stuff later in the game in our end. Pucks that lifted to the net and got tipped that you expose yourself, too.”

NOTES: McTavish became the third Anaheim player to make his debut in the season opener in his draft year, following Cam Fowler (2010-11) and Chad Kilger (1994-95). … Winnipeg C Mark Scheifele served the final game of a four-game suspension he received in the playoffs last season for his hit on Montreal’s Jake Evans. 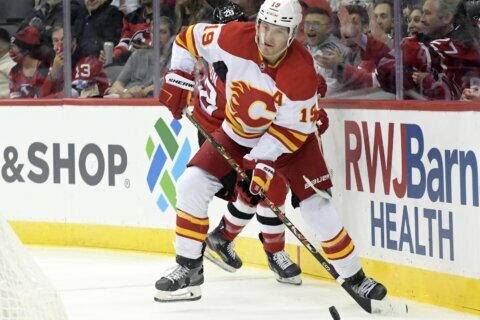 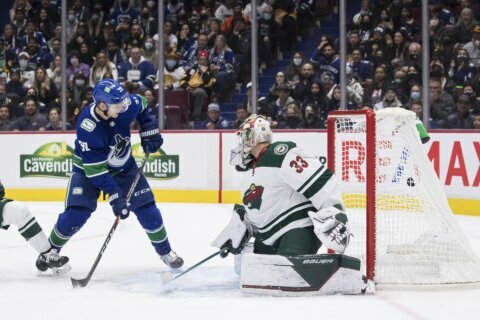 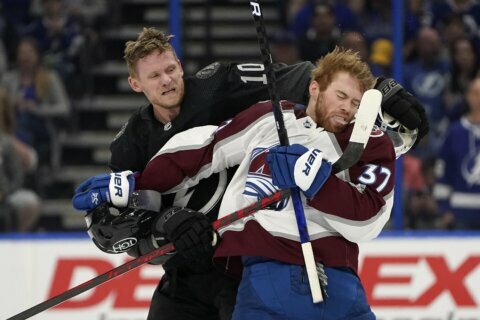