GLENDALE, Ariz. (AP) — Connor McDavid and Leon Draisatl came up together through the Edmonton Oilers’ system, putting up prodigious numbers nearly side by side.

The friends have continued the success in the NHL, so it seemed fitting they reached the same milestone only days apart.

McDavid scored twice to eclipse 200 career goals two nights after Draisatl, and the Oilers remained undefeated with a 5-1 victory over the winless Arizona Coyotes on Thursday night.

McDavid scored in the second period to hit the 200-goal mark and scored his sixth goal in four games in the third. He also joined Wayne Gretzky as the only Edmonton players to have multiple points in the first four games of a season.

“To be going through this whole thing together, it’s fun,” said McDavid, who has 11 points. “It’s special to be a part of that. We’ve grown very close, and it’s fun on and off the ice with him.”

The Oilers were sharp in their first regular-season game in the U.S. since March 5, 2020, due to the pandemic, scoring at least five goals for the third straight game.

Mikko Koskinen had 25 saves in his first start since Mike Smith went on injured reserve with a lower-body injury. Zach Hyman had short-handed and power-play goals in the same game for the first time in his career. Warren Foegele also scored for Edmonton.

“We’ve been getting contributions throughout the lineup a little more than last year, so we’re off to a decent start, but we’ve got a lot of work to do yet,” Oilers coach Dave Tippett said.

The Coyotes had a strong first period despite giving up a late goal but were on their heels after Hyman scored his short-handed goal in the second period. Arizona wilted under Edmonton’s relentless pressure after that, allowing at least five goals for the third time this season.

Dysin Mayo scored in his NHL debut and Karel Vejmelka stopped 26 shots for the 0-3-1 Coyotes.

“I thought we had a really good first period,” Coyotes coach Andre Tourigny said. “The short-handed goal was a big swing. Our power play was confident and our power play has been good this year. Instead of getting back in the game, you give them your lead.”

The Coyotes were good in their own end early after Tourigny switched up his defensive pairings against Edmonton.

That changed late in the first period, when Foegele used some nifty stickhandling to get around Mayo and beat Vejmelka to the stick side.

The goals kept coming for the Oilers.

Hyman scored when he kept the puck on a 2-on-1 and beat Vejmelka to the glove side. McDavid made it 3-0 midway through the period, working his way around the Coyotes’ Johan Larsson before whipping a shot past Vejmelka from the right circle.

Arizona finally got to Koskinen early in the third period, when Mayo gathered Ryan Dzingel’s cross-ice pass and beat him from the right circle.

The momentum didn’t last. Hyman scored on a redirect of a pass from McDavid on a power play and McDavid added his 201st goal a few minutes later on another power play.

“Obviously, it’s a tough pill to swallow, but I thought we played pretty well today,” Coyotes right wing Dmitrij Jaskin said. “I think we deserved a little better, but we’ve got to capitalize on those scoring chances.”

Koskinen was put in a difficult position his previous game, thrust into a 4-3 game after Smith went down. He handled it well, stopping 20 shots in the 6-5 win and kept it going against the Coyotes.

“Koski was unbelievable,” Hyman said. “The other night when Smitty went down, he went in cold and that’s not easy to do. He really shut the door to help us win that game and obviously was a huge part of this game.”

Mayo figured something was up after being paired with Shayne Gostibehere during the morning skate, then heard from former Coyotes captain Shane Doan that he was in the lineup.

Mayo’s parents couldn’t make it down from Canada to see him play, but his wife and son were in the stands when he became the first Coyotes defenseman to score in his NHL debut since Tony DeAngelo in 2016.

“I wasn’t expecting that tonight,” Mayo said. “My goal was to just play a good shutdown game, and I think I did a pretty good job of that.”

Oilers: At Vegas on Friday night. 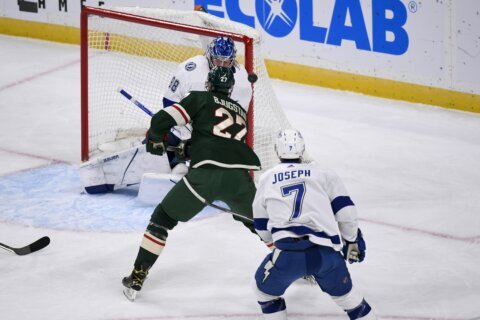