PHILADELPHIA (AP) — Jonathan Huberdeau scored twice, including the go-ahead goal in the third period, and added an assist to lead the undefeated Florida Panthers over the Philadelphia Flyers 4-2 Saturday night.

Owen Tippett also scored and Sam Reinhart had an empty-netter for Florida, which extended its club-record best start to 5-0.

“We have confidence in each other and it shows,” Huberdeau said.

The goals were the first of the season for Huberdeau, as the Panthers stayed hot without goal-scoring contributions from any of their three leading scorers entering the game — Sam Bennett, Carter Verhaeghe and Anthony Duclair.

“Any given night we have some lines, a lot of different looks and different options that can make plays and score goals,” Panthers coach Joel Quenneville said.

“It was a hard-fought game from two teams who came to play, came to compete,” Flyers coach Alain Vigneault said. “I liked our compete level. Unfortunately, tonight a very good team beat us.”

Sergei Bobrovsky made 27 saves for the Panthers. Bobrovsky earned his 300th win in Florida’s last game, a 4-1 victory over Colorado on Thursday night.

Huberdeau put the Panthers ahead 3-2 with 12:07 remaining with his second of the game, a short-handed tally. After Philadelphia turned it over in its zone, Bennett passed to Huberdeau, whose first attempt on the breakaway was denied by Carter Hart with a stellar left pad stop. Huberdeau stayed with the rebound and shot the puck from behind the goal line off Hart’s pads and in.

“Sometimes you get some bounces and that was it,” Huberdeau said.

Added Quenneville: “He stayed with it and it was a pretty nifty play.”

The goal was one of four that came on special teams, including two of the three goals in the second period.

Giroux tied it at 4:23 into the second with a power-play goal, blasting a slap shot over Bobrovsky’s right shoulder from long range.

Atkinson, acquired in an offseason trade with Columbus, netted his fourth in four games with a short-handed tally 6 ½ minutes later to make it 2-1. Joel Farabee forced Reinhart to turn the puck over at the Panthers blue line, and Atkinson sped in all alone on Bobrovsky, beautifully deked and finished with a shot through the goalie’s legs.

Tippett knotted the contest at 2 with 27 seconds left in the second when he went high over Hart from close range after an excellent backhand pass from MacKenzie Weegar to the top of the crease.

Bobrovsky’s best save may have been his upper-body stop on Nicolas Aube-Kubel from close range with just under five minutes left to keep Florida up a goal.

“He made some key saves and played an unbelievable game,” Huberdeau said.

Huberdeau converted on the power play with three minutes left in the first. Huberdeau took a pass from Aaron Ekblad and fired a wrist shot from above the circle that went over Hart’s right shoulder.

Flyers: D Ryan Ellis (undisclosed) didn’t play. Philadelphia recalled Nick Seeler to replace Ellis. F Patrick Brown (COVID-19 protocol) practiced with the team Friday for the first time since being claimed off waivers on Oct. 11. Brown wasn’t in the lineup Saturday but is expected to join the Flyers in Canada on their upcoming three-game road trip.

Referee Gord Dwyer suffered a groin injury in the first period, resulting in Michael Markovic as the only referee with linesmen Devin Berg and CJ Murray. 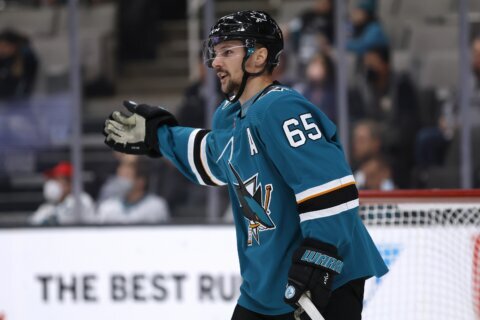 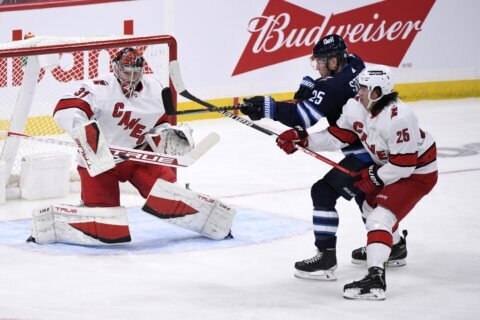 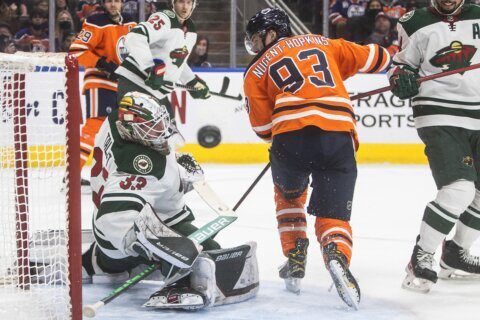