NEWARK, N.J. (AP) — The Calgary Flames keep winning on the road, and Andrew Mangiapane’s scoring is a major reason.

Mangiapane had two of Calgary’s four goals in the first period, and the Flames extended their winning streak to four games with a 5-3 victory over the New Jersey Devils on Tuesday night.

“We scored on some early opportunities and I think that was the difference in the game,” said Mangiapane, who also scored twice in Monday night’s 5-1 win over the New York Rangers. “We had a good start. We knew we needed to come out strong and get our legs underneath us.”

Pavel Zacha had two goals and Dawson Mercer also scored for the Devils.

Nico Daws allowed three goals on seven shots in his second career start before being lifted in favor of Scott Wedgewood, who finished with 20 saves.

“We just lost wall battles. Our puck battles, our 50-50 battles weren’t good,” Devils coach Lindy Ruff said. “A lot of our pain was self-inflicted. They got to pucks quicker. They deserved to get the lead.”

The Flames have won all four games on their current road trip, which concludes with a matchup at Pittsburgh on Thursday. The Devils were completing a season-opening five-game homestand in which they won three times.

“We played well against a young team that hasn’t played a road game yet,” Flames coach Darryl Sutter said.

The victory was the seventh straight for Calgary over New Jersey. It was the first meeting between the teams since Nov. 7, 2019, when the Flames won 5-2 in Calgary.

Calgary improved to 3-0-0 against Metropolitan Division teams and 4-0-0 at teams from the Eastern Conference thus far this season.

“We’re learning a lot to play the right way,” added Sutter, who is coaching the Flames for the second time after leading the Los Angeles Kings to Stanley Cup titles in 2012 and 2014. “This team works really hard and is playing together and playing things right.”

Lucic opened the scoring at 6:35 of the first. Sprung on a pass by defenseman Eric Gudbranson, Lucic skated in alone down the left wing and rifled a shot past Daws for his first goal this season. Defenseman Oliver Kylington, playing his 100th career game, assisted.

“Breakaway speed? You know, actually I think it started as a turnover and Eric made a quick up-play and I got a fortunate bounce,” Lucic said. ”Its always nice to get the first one, especially on the back-to-back. It starts with the players, but also the coaching staff. Especially Darryl, he puts a lot of emphasis on us having a good start.”

Lindholm increased the lead to 3-0 on the power play with his seventh of the season at 12:10 .

At that point, Daws, a rookie, was lifted from his second career start. Daws was coming off a 2-1 overtime win over Buffalo on Saturday in his NHL debut. Ruff said this young netminder generally wasn’t at fault for his team’s early deficit.

“If you’re going to give up a breakaway without even letting him get into the flow of the game, you can’t criticize the goalie tonight,” Ruff said.

Mangiapane greeted Wedgewood with his second goal of the game and seventh this season to make it 4-0 at 12:56. The 25-year-old forward said his recent scoring prowess is mostly a byproduct of teammates’ hard work.

“Players here are just kind of finding me. It’s definitely nice,” he said. ”Obviously, it is more important to get the two points.”

The Flames outshot the Devils 10-4 in the first period and 12-9 in the second.

Zacha scored New Jersey’s first at 7:01 of the second, his third of the season.

In the third, Tkachuk made it 5-1 with a power-play goal at 11:18, with assists to Lindholm and Sean Monahan.

“We didn’t compete first couple of shifts and teams like that can kind of convert it to goals,” Zacha said. “We left our goalie there without any help.”

Vladar won for the second time this season.

Lucic, who was a member of the Boston Bruins when they won the Stanley Cup in 2011, said he is already liking the makeup of these new-look Flames after Calgary missed the playoffs last season.

“We added some veteran guys and we are doing a great job playing as a team,” he said. ”That is something the good teams I have been on have had. That’s something we have to continue to work on moving forward to continue to be a good team.”

The Devils gave Flames forward Blake Coleman a video tribute early in the first period. The 29-year-old Coleman was a fan favorite in his four seasons with the Devils. He was traded to Tampa Bay in February 2020 and went on to win two Stanley Cups with the Lightning. He signed a six-year, $29.4 million contract with the Flames in July.

Flames: Visiting Pittsburgh Penguins on Thursday night in the last game of a five-game trip. 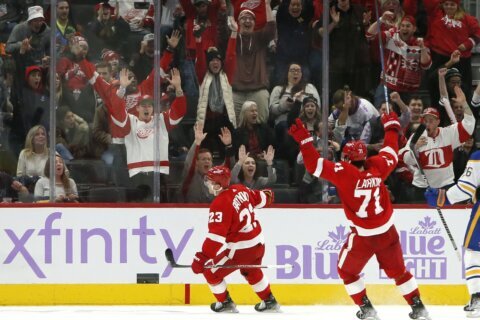 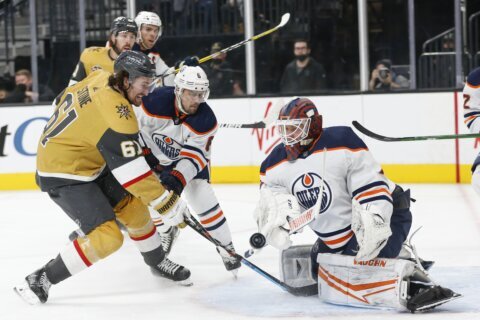 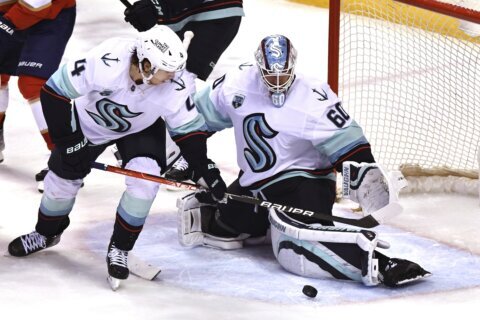