BOSTON (AP) — Charlie Coyle had the only score in the shootout and the Boston Bruins beat Florida 3-2 Saturday night, ending the Panthers’ season-opening winning streak at eight games.

The Panthers fell two wins short of the NHL record for consecutive victories to start a season, set by Toronto in 1993-94 and matched by Buffalo in 2006-07.

Florida was playing the second of a back-to-back after beating Detroit in OT on Friday night.

It was Florida’s second game since coach Joel Quenneville resigned amid a sex scandal when he was with the Chicago Blackhawks in 2010.

Quenneville, the second-winningest coach in NHL history, resigned Thursday, two days after being among those implicated for not responding swiftly to allegations by former Chicago player Kyle Beach of being sexually assaulted by then-Blackhawks assistant Brad Aldrich during the 2010 Stanley Cup playoffs.

Andrew Brunette, an assistant under Quenneville, is the interim coach.

“We played hard,” Brunette said. “Heck of an effort by the guys in a back-to-back game, in a tough place to play.”

Coyle also scored in regulation, and Linus Ullmark stopped 33 shots, and three tries in the shootout.

Coyle cut around goalie Spencer Knight before tucking in a shot in the shootout.

“It’s hard to talk about it,” Coyle said of his winner. “Sometimes you have something planned and sometimes you don’t. I’m just glad it went in.”

Aleksander Barkov pushed Florida in front with a power-play goal 7:49 into third period, but Charlie McAvoy cut in from the point and slipped a wrist shot in from the bottom of the right circle for a power-play score, tying it with 6:25 left in regulation.

“Tonight was an opportunity,” McAvoy said of his goal. “On that play, I was able to get moving down the wall.”

Anthony Duclair also scored for the Panthers, his sixth of the season, and Knight made 31 saves in his third start.

Knight — playing back on familiar ice in Boston, the city where he played his college hockey — also saw his personal unbeaten streak end. It was the first time in his seven career regular-season appearances that he didn’t get the win, meaning his victory streak ended two shy of matching the NHL record for consecutive goalie wins to start a career.

“In was fun to play in an atmosphere like that,” said Knight, who grew up watching the Bruins in Darien, Connecticut. “Like seven, eight months ago, I was watching them on TV in my dorm room. I’ve been coming here since I was six years old.”

Coyle beat Knight with a rising wrist shot from the left circle that slipped under the crossbar on the far side, making it 1-0 with 42 seconds left in the first.

Duclair shifted around defenseman Derek Forbort before slipping a wrister by Ullmark from the slot 47 seconds onto the second.

Knight dropped and made a pad stop on Tomas Nosek’s clean breakaway midway into the second.

Florida’s eight-game winning streak to start the season tied the fourth-longest in NHL history. The defeat also ended Florida’s 14-game regular season winning streak dating to last spring, a run that ended tied for sixth-best in league history and three shy of Pittsburgh’s record of 17 in a row from March 9-April 10, 1993.

The 31-year-old Hayes, a Boston native, died suddenly on Aug. 23. He played for both organizations. There was also a moment of silence followed by a video tribute, with highlights from his days with both teams. The fans followed with a loud ovation.

Boston’s Brad Marchard hit a post in the game’s opening minute, and teammate Taylor Hall’s backhander nailed the crossbar early in the third.

“It seems like early-on (in the season) we’ve hit a lot of posts,” Boston coach Bruce Cassidy said.

NOTES: It was Boston’s third straight game against an unbeaten team. They lost to the Panthers in Florida on Wednesday and to Carolina on the road Thursday. … Bruins F Craig Smith returned after missing the previous three games with an unspecified injury. He got moved from his usual spot on the second line to the first midway into the game. … Knight played two seasons at Boston College, earning the 2020-21 Hockey East Goaltender and Player of the Year. 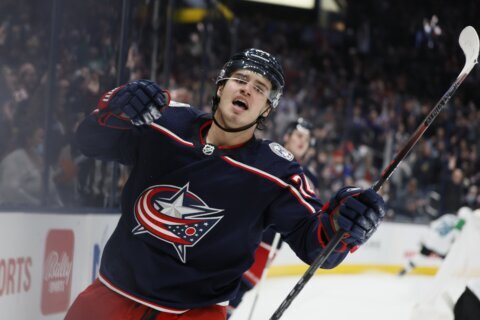 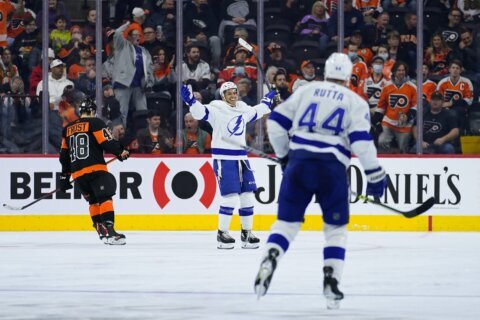