LAS VEGAS (AP) — Vladimir Tarasenko’s tenure with the St. Louis Blues was a hot topic during the offseason after he requested a trade earlier in the summer, and again after the team left the 29-year-old winger unprotected in the 2021 NHL Expansion Draft.

The organization might be thankful he’s still wearing a Blues sweater.

Tarasenko broke a tie midway through the third period in St. Louis’ 3-1 victory over the Vegas Golden Knights on Wednesday night.

“Happy for him. He’s been working so hard,” said Blues goalie Jordan Binnington, who made 42 saves. “He’s been through a lot and it’s really nice to see him be rewarded. Can’t say enough about that guy and his work ethic. We’re all happy for him and hopefully there’s more to come.”

William Karlsson opened the scoring for the Golden Knights, and Robin Lehner made 35 saves.

After averaging 30.5 shots on goal in their first two games, the Blues fired 38 on net Wednesday.

“You have to win in different ways in this league,” St. Louis coach Craig Berube said. “I thought Lehner played an excellent game, and you’re gonna run into that throughout the season. You’ve got to stay patient. That’s the thing I talked to our team (about) in between periods: don’t force things and don’t get impatient, because that’s where you’ll make mistakes.”

It was a critical mistake that cost Vegas, incidentally by former Blues captain Alex Pietrangelo.

On the tiebreaking goal, Pietrangelo turned the puck over in the neutral zone with a blind pass, giving the Blues a 3-on-0 rush. Taking a pass from Brayden Schenn, Jordan Kyrou fed Tarasenko for a one-timer past Lehner with 10:11 to play.

“It’s nice to play the game. I missed a lot of time,” said Tarasenko, who’s played just 34 games over the last two seasons due to injuries. “I enjoy my time out there with the guys. Goals are nice, wins are nice, make great plays — but there’s a lot of ways to improve my game, improve our team’s game. So we will focus on this and move on.”

Vegas, meanwhile, played its first game without top-line forwards Mark Stone and Max Pacioretty, who are both injured.

But coach Peter DeBoer wasn’t about to use it as an excuse for his team’s lack of production.

“I think there’s a little more onus on us to create offensive opportunities,” DeBoer said. “I think the main focus of our group right now is to be able to shut other teams down. We can be hard to play against, and I think that’s where our mindset has to be. We need a better mindset and look at these games like they’re the playoffs for us. Teams who are in spots around Thanksgiving, those are the teams that are going to be there at the end of the year, so you can’t let these losses pile up.”

The Golden Knights didn’t get their first shot on goal until nearly seven minutes into the game, then took the lead on Karlsson’s goal. After Reilly Smith drew him to one side, Binnington slid across the crease to deny Karlsson’s initial one-timer, but he punched home his own rebound.

The Blues eventually solved Lehner in the second period with their continued pressure in the offensive zone. Ryan O’Reilly dropped the puck off for former Knight David Perron, whose initial shot deflected off Vegas defenseman Shea Theodore to set up Saad as he skated in.

Saad, who signed with St. Louis as a free agent in July, buried his first goal as a member of the Blues.

Barbashev had an empty-net goal.

NOTES: Vegas’ Nolan Patrick played in his 200th career game. … Nic Roy, William Carrier and Brett Howden made their regular-season debuts for the Golden Knights after nursing injuries. … O’Reilly’s assist on Saad’s goal left him three shy of 400 career helpers. O’Reilly has 16 points (seven goals, nine assists) in 17 career games against Vegas. … Perron’s assist on Saad’s goal moved him into an 11th-place tie with Red Berenson, each with 240 assists for the Blues. 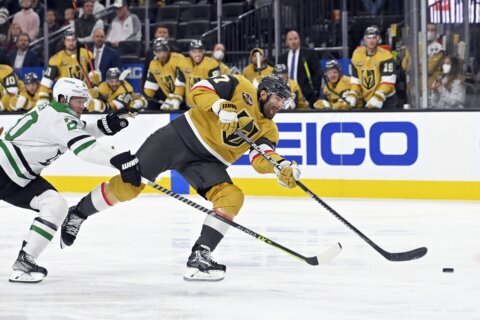 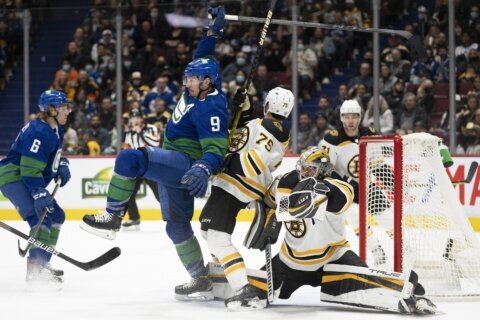 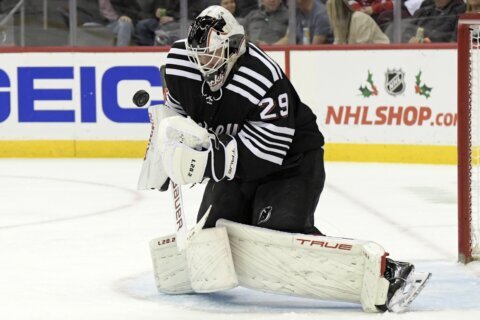