RALEIGH, N.C. (AP) — Frederik Andersen made 33 saves for his first shutout with Carolina, giving the Hurricanes their best six-game start in franchise history with a 3-0 win over the Boston Bruins on Thursday night.

The Hurricanes are 6-0-0 — an opening streak that’s one game longer than two seasons ago.

“It’s a good feeling winning games and we want to continue to do that,” Hurricanes captain Jordan Staal said. “We’ve strung together a great and we want to keep banking the points.”

They’ve also only used Andersen in goal this season. He became the seventh goalie in NHL history to win each of his team’s first six games of a season.

“One of those games where you battle and I think I got a lot of good help from the guys,” Andersen said.

Tony DeAngelo and Nino Niederreiter scored for the Hurricanes, and Andrei Svechnikov added an empty-net goal.

The Bruins lost to an unbeaten team for the second night in a row after falling 4-1 to the Florida Panthers a night earlier in the start of a two-game road trip.

“You have to think both games were very winnable,” Boston coach Bruce Cassidy said. “A little different luck around the net and I think it’s a different outcome.”

The Hurricanes killed all three of Boston’s third-period power plays, including 61 seconds of a two-man advantage. That allowed Andersen to secure his first shutout since March 2020, when he was with the Toronto Maple Leafs.

“You’re not going to win that many games in a row without having great goaltending,” Staal said.

DeAngelo, who was signed in the offseason, recorded his first goal with the Hurricanes.

Niederreiter’s goal came 18 seconds into a second-period power play. He made a pass toward the crease, with the puck bouncing off Boston defenseman Derek Forbort.

“We got the bounces,” Carolina coach Rod Brind’Amour said. “We got the crazy goal. Really, two goals bouncing off things and go in the net. If it goes the other way, we don’t win the game.”

That goal included an assist for Andersen for his first point of the season and the 10th point of his NHL career.

AN ‘A’ FOR ANDERSON

With the assist, Andersen became the second Carolina goalie to post a shutout and record an assist in the same game. Arturs Irbe did it on March 30, 2002. That also came against the Bruins.

“That was a good bounce for us,” Andersen said of the sequence he began by making a pass from behind his own net.

Only 11 active NHL goalies have a double-digit career point total.

DeAngelo’s goal was the first goal by a Carolina defenseman this season.

Brady Skjei, who had been his teammate from 2017-20 with the New York Rangers, was credited with an assist.

The Bruins posted at least three goals in each of their first four games. They’ve been held to just one goal on 64 shots the past two games. “Right now, it’s not going in for a couple of guys,” Cassidy said. “We needed the end result. We have to finish.”

Bruins: Host the Florida Panthers on Saturday in a rematch of Wednesday night’s game in Florida.

Hurricanes: Host the Chicago Blackhawks on Friday night to complete their first back-to-back of the season. 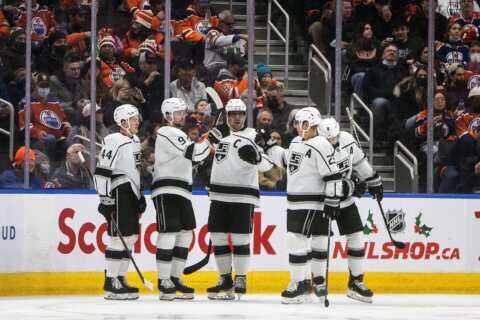 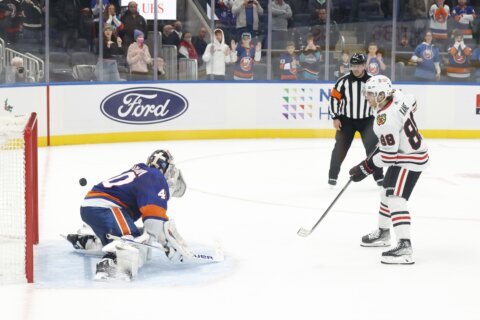