Training camps got under way around the NHL on Thursday with several big-name stars nowhere to be found.
Listen now to WTOP News WTOP.com | Alexa | Google Home | WTOP App | 103.5 FM
(1/3) 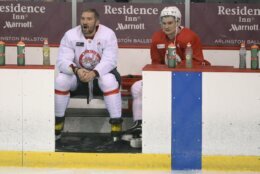 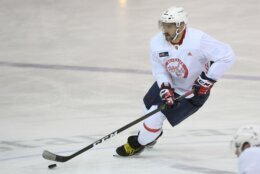 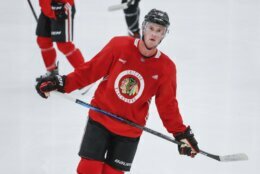 ARLINGTON, Va. (AP) — Sidney Crosby’s injured left wrist and Evgeni Malkin’s right knee are keeping them off the ice in Pittsburgh. Jack Eichel and Buffalo cannot agree on a course of action for his back problems. Evander Kane and San Jose agreed it’s best he stay away.

Training camps got under way around the NHL on Thursday with several big-name stars nowhere to be found. From Washington’s Nicklas Backstrom being considered week to week while rehabbing a hip injury to the Vancouver Canucks not knowing how long they’ll be without unsigned Quinn Hughes and Elias Pettersson, the absences overshadowed the attendance in many places on the first day of on-ice workouts.

With more than two weeks until the regular season, there’s also no reason to rush.

“I think you see with the compressed schedule that we’ve had over the last couple seasons that there’s injuries that need to be maintained,” Capitals general manager Brian MacLellan said. “Especially if you’re an older player, (it’s important) that you take the time to get it healed properly and don’t insert the player into the lineup too early.”

The archrival Penguins will have at least a couple of weeks to see how they play without Malkin and Crosby. Malkin is expected to return in late November at the earliest and Crosby will miss at least the first two weeks of meaningful games.

“They are two generational talents, arguably the best players of their generation, and so those guys aren’t easy to replace,” coach Mike Sullivan said. “Having said that, I think whenever players go down from an injury standpoint, it’s going to provide opportunity for others and others need to step up.”

Someone else will — eventually — step up as the Sabres’ captain after Eichel was stripped of the title amid his stalemate with the team over how to treat a herniated disk that has sidelined him for six months. Under the NHL’s new collective bargaining agreement reached last year, teams now have the final say on how players can treat injuries, so the Sabres could eventually opt to suspend Eichel, which would likely lead to him filing a grievance.

In San Jose, Kane was cleared of allegations he gambled on his own and other hockey games, but the league is still investigating allegations of sexual and physical abuse made by his estranged wife. The Sharks said a mutual decision was made for him not to attend camp.

“I don’t think it’s any different than guys getting hurt, not being there for lineup,” Sharks defenseman Brent Burns said. “We don’t worry about that stuff. We can’t. There’s too much other stuff.”

Asked if Kane would be welcomed back, captain Logan Couture said, “What happens in the dressing room stays in the room.”

Some returns Thursday were happy ones. Chicago captain Jonathan Toews is practicing with teammates again after missing all of last season and said with a smile, “It feels really good to be back.”

Vladimir Tarasenko is at St. Louis camp despite asking for a trade. Same with Evgeny Kuznetsov in Washington after an offseason of trade rumors.

“As long as I play here I will work 100 percent,” Tarasenko said. “I don’t want to be a distraction in the room. I’m here to work, I’m healthy, I’m happy to play hockey again.”

The distraction of unsigned players is not affecting most teams. Only Vancouver with Hughes and Pettersson, and Ottawa with Brady Tkachuk, have restricted free agents without new contracts.

Vaccinations do not appear to be a major distraction, either. The league figures 98% of its players will be fully vaccinated against COVID-19 by the time the season starts, a rate that could be credited to protocols and Canadian federal law that would prevent border-crossing without it.

“Once they said they weren’t going to file for the exemption to go to Canada, it really put a lot of pressure on the people that were holding out because that’s a huge chunk of the season that you’re not going to get paid for,” Sabres forward Kyle Okposo said. “It’s funny what happens when you start to affect people’s wallets.” 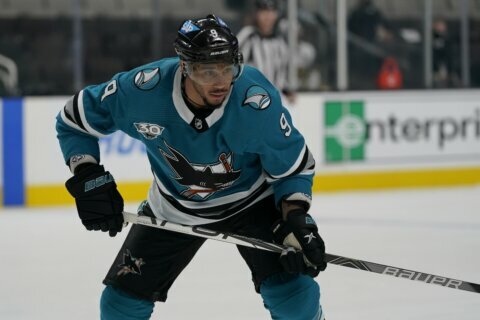 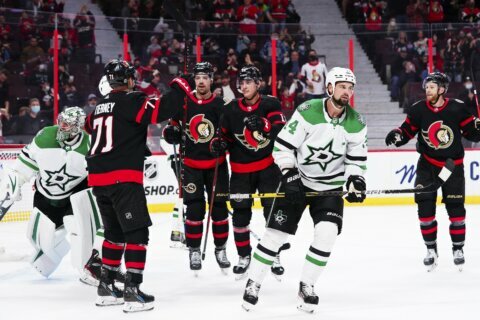 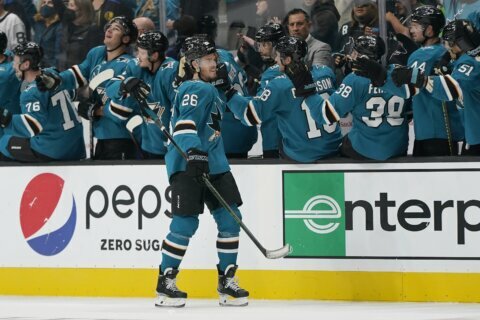