COLUMBUS, Ohio (AP) — Max Domi scored 4:39 into overtime to lift the Columbus Blue Jackets over the Detroit Red Wings 5-4 on Saturday night in the season finale for both teams.

Matiss Kivlenieks had 33 saves for the Blue Jackets, who despite the feel-good win to end the season couldn’t avoid finishing in the Central Division cellar. Columbus needed a win in regulation to finish ahead of the Red Wings.

“Obviously, not the season we wanted or hoped (for),” Columbus forward Cam Atkinson said. “Definitely nice to get the last one in front of our fans.”

The Blue Jackets missed the playoffs for the first time in five seasons under John Tortorella, who has been mum about his future with the team.

“It was miserable. It sucked,” Tortorella said after the 18-26-12 finish. “But I think you got to turn it around and learn from it, and I hope we’re never involved in that situation again.”

Jakub Vrana, acquired from Washington at the trade deadline, got his eighth goal in 11 games with his new team. Dennis DeKeyser, Sam Gagner and Valtteri Filppula also scored for the Red Wings. Calvin Pickard had 31 saves.

Scoring in the back-and-forth affair began when a long shot by Dennis Cholowski was redirected by Vrana 6:40 into the game. Columbus tied it when Atkinson tapped in a doorstep pass from Patrik Laine at the 10:16 mark.

In the second, DeKeyser’s slap shot from the right circle shot beat Kivlenieks, but Bjorkstrand answered for the Blue Jackets with a shot over Pickard’s shoulder.

Columbus got a slick short-handed goal in the third when Nathan Gerbe, his back turned to the play in the Detroit zone, shoveled the puck out from the boards for Robinson. But before the Blue Jackets could kill the Detroit penalty, Gagner put back a rebounded puck to tie it at 3.

Roslovic lifted a shot over Pickard’s shoulder with 5:15 left, but Filppula poked in a rebound that had gotten behind Kivlenieks to ensure overtime.

TORTS OR NO TORTS?

Tortorella may have coached his last game for Columbus. His contract expires, and one side or the other — or both — could decide it’s time for him to move on. Hired seven games into the 2015-16 season after Todd Richards was shown the door, the no-nonsense, no-whining Tortorella led Columbus to the playoffs the past four seasons, although the Blue Jackets managed to win just one postseason series. After the game, Tortorella said he and general manager Jarmo Kekalainen would get together soon to discuss the future.

“I think there will be a time and place for all that stuff,” he said.

Despite a string of injuries to key players, Detroit made progress after finishing last season at the bottom of the Atlantic Division. The Red Wings won 19 games in the 56-game season compared with 17 in 71 games in 2019-20. They also topped last season’s numbers in regulation wins and points, as well as goals-for and goals-against averages.

“We’re a much, much improved hockey team from a season ago, both in how we play the game, in our habits, in our structure,” Detroit coach Jeff Blashill said. 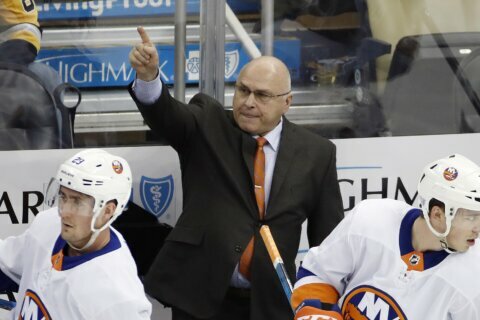