ST. PAUL, Minn. (AP) — Mats Zuccarello scored twice and Nick Bonino had a goal and two assists on Wednesday to lead the Minnesota Wild past the Arizona Coyotes 5-2.

It was the Wild’s first game since the death on Sunday of 20-year-old Daunte Wright, a Black man fatally shot by police during a traffic stop in a Minneapolis suburb.

Minnesota’s originally scheduled game on Monday against St. Louis was postponed until May 12. And Wednesday’s game was moved to 1 p.m. local time in anticipation of potential curfews. The team held a moment of silence for Wright before the game.

Both of Zuccarello’s goals came on Minnesota’s resurgent power play, which converted all three of its opportunities in the game. After spending much of the season with the league’s worst power play, the Wild have scored 12 times with the man advantage in their past seven games.

“I think with the skill we have here on this team, we’re better than a lower-in-the-league power play,” said Bonino, whose power-play goal in the second period put Minnesota ahead 3-1. “For it to get clicking now when the playoffs come around and you’re not getting as many chances, you’ve got to be dialed in and ready to score.”

Zach Parise and Jared Spurgeon also scored and Cam Talbot made 28 saves for Minnesota, which beat Arizona for the fifth time in six games this season and solidified its hold on third place in the West Division.

Jakob Chychrun and Phil Kessel scored for the Coyotes, who wrapped up a nine-game road grip with their fifth straight loss.

“I know the results aren’t there (but) I actually like our last three games,” Arizona coach Rick Tocchet said. “We need somebody to make a play, a crucial play at the right time, and we’re not getting it right now.”

Antti Raanta, who had been out since March 22 because of an injury, stopped 17 of 22 shots.

Minnesota was looking to bounce back after a tough weekend in St. Louis. After losing 9-1 on Friday, the Wild gave up a goal in the final minute of regulation and another with 2 seconds left in overtime to lose 3-2.

“That’s the NHL — it goes quick,” Zuccarello said. “That’s the good thing about when you win or lose, you have to forget about it quick and focus on the next game.”

Zuccarello netted his seventh of the season on a power play late in the first period to open the scoring. After a nifty give-and-go with Matt Dumba to enter the zone, Marcus Johansson fired a pass across the slot to Zuccarello, who slipped a shot between Raanta and the near post.

Johansson also assisted on Zuccarello’s second goal with a drop pass that set up an open wrist shot that made it 4-1.

“Those were two great plays by him,” Zuccarello said. “I was just fortunate enough to score some goals.”

Parise scored for the second time in three games, but it was just his fifth goal of the season. After averaging 24 goals a year in his first eight seasons with the Wild, the veteran forward has struggled with injuries this year but has been playing his best hockey of the season of late.

“There’s never a doubt on Zach Parise’s work ethic,” Wild coach Dean Evason said. “You’ve watched him over the years in practice and obviously games. He competes his butt off and he’s going to do that each and every night, and that clearly has allowed him to have not only success as of late but throughout his entire career.”

The teams will meet again twice next week in Arizona. With Colorado and Vegas holding a firm grip on the top two spots in the West, the Wild are hoping to put some distance between themselves and the Coyotes, Blues and Sharks, who are locked in a tight battle for the fourth and final playoff spot in the West.

“We understand that the next couple games can kind of push us away from that pile, so it’s big to keep teams there and for us to keep climbing in the standings,” Wild forward Marcus Foligno said.

Coyotes: Host the Blues on Saturday.

Wild: Host San Jose for a pair of games Friday and Saturday. 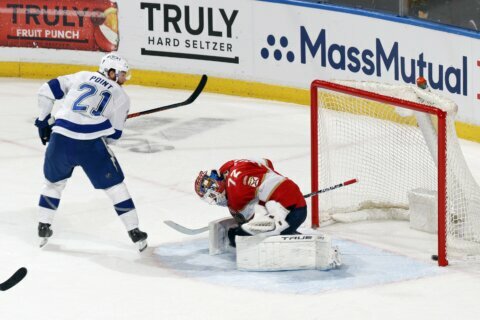 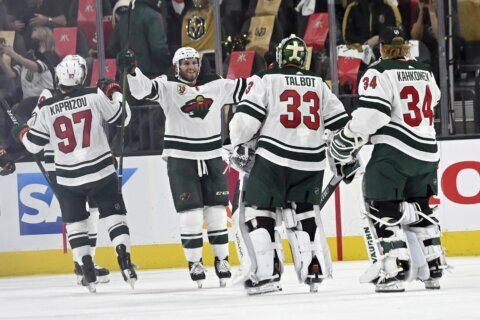 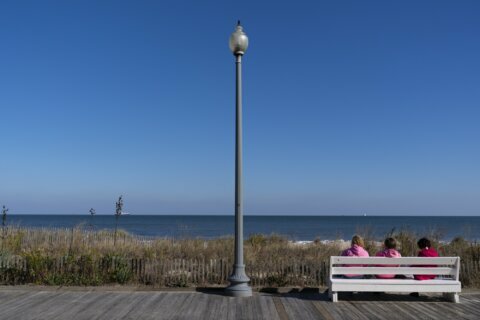