SAN JOSE, Calif. (AP) — Rudolfs Balcers and Ryan Donato scored in the second period, and the San Jose Sharks completed a two-game sweep of the Minnesota Wild with a 4-2 victory Wednesday night.

The Sharks followed a shootout win on Monday with another strong performance against a team they are chasing in the standings.

“We didn’t give up a lot,” coach Bob Boughner said. “We had some good o-zone time. We were managing the puck properly. We didn’t have any major turnovers. It was one of those games where we stuck to the game plan.”

Nikolai Knyzhov scored his first career goal and Evander Kane had an empty-netter for the Sharks. Martin Jones made 26 saves for San Jose.

The Sharks are four points out of a playoff spot.

“We just have to keep playing the way we are,” captain Logan Couture said. “We defended real hard and created a lot of offense. … I think our game is in a really good spot right now.”

Kirill Kaprizov and Mats Zuccarello scored for Minnesota, and Kaapo Kahkonen made 29 saves. The Wild are winless in their last five road games.

The Sharks grabbed control with a strong second period, beating Kahkonen for the first two goals, with Brent Burns involved in both.

Early in the period, Burns hit Tomas Hertl with a long stretch pass from his own zone. Hertl then sent a saucer pass toward the goal that Balcers got to and beat Kahkonen from in close.

Then, with the Sharks on the power play midway through the period, Burns’ shot from deep was stopped by Kahkonen, but Donato got to the rebound and backhanded it home against his former team.

“Tonight we gave them way too many grade A chances,” Wild forward Ryan Hartman said. “Everything they got was given to them by us. We have to do a better job of limiting their chances and getting it out of our zone.”

The Wild got one back midway through the third when Kaprizov’s shot went through a screen by Hartman and beat Jones.

Zuccarello scored with 12.1 seconds left to make it a one-goal game, but Kane sealed it with his empty-net goal.

“We had a good push there at the end but it was too late,” Hartman said.

The Wild signed forward Matt Boldy, their first-round draft pick in 2019, to a three-year, entry-level contract on Tuesday and assigned him to their AHL affiliate in Iowa. Boldy’s college season ended last weekend when Boston College lost in the regional finals of the NCAA Tournament. The 19-year-old had 11 goals and 20 assists in 22 games for the Eagles, but general manager Bill Guerin wouldn’t guarantee Boldy would play for the Wild this season even though they’re spending a year of his service time.

“Listen, this is the best league in the world. Matt’s a young player. The last thing we want to do is force-feed him and put him in something that’s overwhelming and that he’s not ready for,” Guerin said. 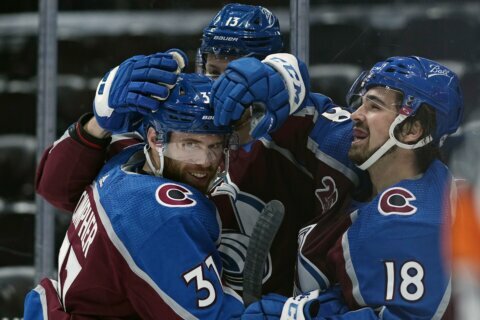