Mrazek made 28 saves in his first game back after a lengthy absence as the Carolina Hurricanes beat the Dallas Stars 1-0 on Sunday night.

“It felt good to be back,” Mrazek said. “It has been a long journey.”

Mrazek, who notched his third shutout of the season, played for the first time since suffering a thumb injury Jan. 30 against Dallas.

Stars coach Rick Bowness didn’t return to the bench for the third period because of what the team announced was a COVID protocol.

Jordan Martinook’s second-period goal was enough scoring for the Hurricanes.

Dallas goalie Jake Oettinger made 37 saves just a night after a 41-save outing in a victory against Carolina.

Mrazek was tied with two other goalies for the league lead with two shutouts when he was injured in late January. He had surgery on his right thumb as a result of an injury while playing the Stars.

Now, he’s one of only six NHL goalies dating back to 1943-44 to have shutouts in his first three wins of a season.

“He’s a gamer,” Martinook said. “It was good to see him back in there. The results speak for themselves. He played phenomenal. Big saves when we needed them.”

Mrazek joined former standout Arturs Irbe as the only goalies in franchise history with at least three shutouts in three consecutive seasons.

Mrazek returned to form in his first game back, though he made a conditioning outing with the AHL’s Chicago Wolves in preparation for being back in the NHL.

“I think the first period I was looking for myself a little bit there,” Mrazek said. “I was all over the place. … I think in the second period, I established myself.”

The Hurricanes had good goalie work for stretches with Mrazek out of the lineup. Alex Nedeljkovic, who played Saturday night, was scratched for Sunday’s game. That meant James Reimer, who has a 14-4-1 record this season, was the backup for both weekend games.

“He didn’t have a lot of work for two (periods),” Carolina coach Rod Brind’Amour said. “When we needed him to make some saves there in the last five minutes, he made three or four really just spectacular.”

Bowness wasn’t around to witness his team’s best period because of a positive COVID test.

“We did communicate with the league and they agreed with us: Let’s get him out of the game,” Dallas general manager Jim Nill said of continuing the game without Bowness. “Because of his situation of being vaccinated, and we’d usually regularly get these tests sometime early tomorrow morning. But because this one came back quicker, we consulted with the league and everybody decided this was the right situation.”

The Stars had won consecutive games for the first time since the opening four games of the season.

“He has no symptoms and we’re very comfortable in presuming that this is a false positive,” Nill said.

Brind’Amour said he noticed that Bowness wasn’t behind the bench, but he hadn’t been told why until later.

The Stars were told of Bowness’ situation.

“We talked as a group, coaches talked,” captain Jamie Benn said of the between-periods situation. “Nothing new.”

A day earlier, Dallas goaltender Anton Khudobin was placed in the league’s COVID protocol. He had been the expected starter for that game.

Nill said Khudobin has since had two negative results on tests and has been cleared to travel with the team.

Dallas had other health issues as well. Center Jason Dickinson was placed on injured reserve with a lower-body ailment prior to Sunday’s game. The Stars did get left winger Roope Hintz back after a one-game absence.

For Martinook, it was only his second goal of the season, with the other coming Feb. 13 at Dallas.

“I feel like I’ve been close and kind of fighting it, a little frustrated,” Martinook said.

He credited his father with setting him straight.

“He said, ‘Quit gripping your stick so tight and have fun. You’ve scored goals before, just go out and shoot,’ ” he said.

Stars: At Chicago for games Tuesday and Thursday to cap a six-game road trip. 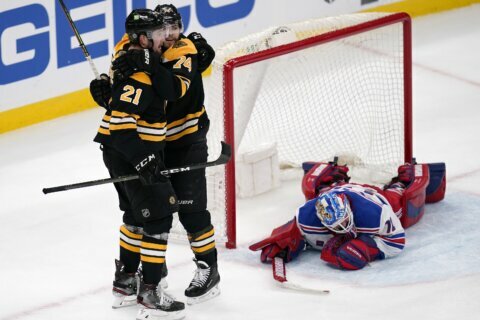