WINNIPEG, Manitoba (AP) — Mike Smith stopped 26 shots in his third shutout of the season, and the Edmonton Oilers blanked the Winnipeg Jets 3-0 on Saturday night.

Tyson Barrie, Jesse Puljujarvi and Alex Chiasson scored for the Oilers, who had not played since a 5-0 loss at Calgary last Saturday. Captain Connor McDavid and Leon Draisaitl each had two assists.

“Any time you have a couple of days off, you can regroup and look at your game and tweak the things that need to be tweaked and build on the things that you like,” McDavid said.

“The players did a good job of buying in at practice and working hard to keeping ourselves ready and coming out and getting rewarded for it.”

Edmonton (26-12-2) pulled within three points of Winnipeg for second place in the North Division.

“The last few days we’ve had good energy, there was a really positive feeling around our group,” Oilers coach Dave Tippett said. “They were anxious to play, which is a good sign. We had the chance to get some good practice time in and work on our game a little bit.

“It’s not as if we did anything new this week. We reviewed some stuff that’s been in our game all along. When you have a chance to review some of it, you get refreshed with it.”

The Jets (27-15-3) were playing their fourth game in six nights. Connor Hellebuyck stopped 22 shots in the loss.

Hellebuyck put on a show in the first period to keep the well-rested Oilers at bay.

In a two-minute span midway through the frame, last year’s Vezina Trophy winner denied Kailer Yamamoto and Chiasson on breakaways before shutting the door on Zack Kassian with a dangerous tip in front.

Both teams came into the game with identical second-ranked power plays, but Edmonton finished 2 for 6 with the man advantage while Winnipeg went 0 for 3.

The Jets took four penalties in a row between the first and second periods, and the Oilers’ dangerous power play made them pay on the fourth one.

With Neal Pionk in the box for hooking, the Oilers finally managed to sneak a puck past Hellebuyck when Barrie one-timed McDavid’s setup from the point at 12:00 of the second.

Puljujarvi made it 2-0 when he converted a beautiful no-look, one-handed pass by McDavid from behind the net at 6:37 of the third. Two Jets defensemen converged on McDavid, leaving Puljujarvi all alone in the crease.

“He’s the best player in the world for a reason,” Jets forward Mark Scheifele said of McDavid. “You just can’t give him time and space. He’s so tricky with the puck. He makes plays that a lot of people don’t make in this league. You have to be aware of him every time he’s on the ice.”

Chiasson helped close it out with Edmonton’s second power-play tally of the game, a slap shot from the point at 12:57 of the third.

The Oilers improved to 5-2-0 versus Winnipeg this season.

Oilers: At Montreal on Monday night to open a two-game series. 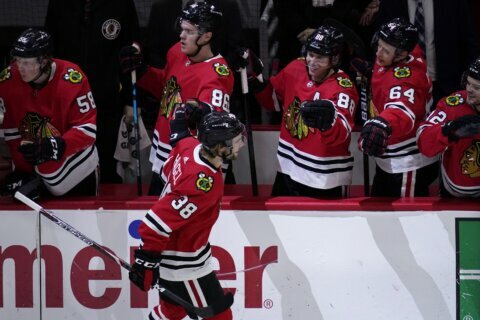