UNIONDALE, N.Y. (AP) — Alexandar Georgiev made 31 saves in his first start since March 19, Alexis Lafreniere and Colin Blackwell scored in the second period, and the New York Rangers beat the Islanders 4-1 on Friday night.

Mika Zibanejad and K’Andre Miller also scored and Artemi Panarin had two assists for the Rangers, who have won four of six (4-1-1).

The Rangers had started Ilya Shesterkin and backup Keith Kinkaid in recent weeks. Georgiev was relieved to forge a victory in his return, improving to 6-5-2 on the season.

“I think it was maybe a little bit easier even, I haven’t played for a while, and I just came right into the game,″ the 25-year-old netminder said about playing after his lengthy layoff. “I was confident coming into it and just did my job.”

Andy Greene scored and Semyon Varlamov finished with 32 saves as the Islanders snapped a five-game winning streak and fell to 17-2-2 at home.

The teams meet again on Sunday night at Nassau Coliseum.

The Islanders are tied with the Washington Capitals with 56 points atop the East Division with 15 games remaining for each team.

“It’s part of this long season. You’re not going to be at your best every night,” Islanders coach Barry Trotz said. ”Pucks didn’t go in for us tonight.”

The Rangers were coming off a dreary 5-2 home loss to the Pittsburgh Penguins on Thursday night.

“We just looked like a different team. I thought it was a true team effort from our goalie to our ‘D’ to our forwards,” Rangers coach David Quinn said. ”Everyone did what they needed to do. It was a huge win for us.”

The Rangers trail Boston by five points for the final playoff spot but the Bruins have three games in hand.

The teams played a brisk first period featuring strong saves at both ends. The Rangers held a 13-7 shots advantage over the first 20 minutes. Varlamov stopped Ryan Strome on the Rangers’ best chance six minutes into the game after Strome accepted a pass from Panarin but was denied by a sliding Varlamov save.

Zibanejad had a golden opportunity, springing into the Islander zone on a breakaway after leaving the penalty box. But he lost control on the puck with no Islander in sight and failed to get off a shot.

Lafreniere finally opened the scoring with his seventh goal, tapping the puck past Varlamov at 6:05 of the second. Linemates Kaapo Kakko and Filip Chytil drew assists. All three forwards — starting with the 19-year-old Lafreniere who was the first overall pick in last year’s draft — are 21 years old or younger.

Lafreneiere’s goal ended Varlamov’s shutout streak against the Rangers this season at 146:05. Varlamov registered shutouts in two of the team’s three meetings earlier this season at Madison Square Garden. Georgiev blanked the Islanders in the other game.

Blackwell made it 2-0 with his 12th goal at 10:01 of the second. Blackwell scored his sixth goal in the last seven games. The 28-year-old Blackwell, who played four years at Harvard and was a seventh-round draft pick by San Jose in 2011, had three goals in 33 NHL games with Nashville before this season. He signed a two-year contract with the Rangers in October.

“It comes with opportunity and you have to make the most of it,” Blackwell said of his recent scoring prowess. “I’m trying to keep it pretty simple, doing the right thing and creating your own puck luck. It’s the way I play.”

Greene narrowed the deficit to 2-1 with his first goal his season at 14:53 of the second. The defenseman’s slap shot from the point appeared to be deflected by a Rangers player before it eluded Georgiev.

Miller scored an insurance goal at 11:48 of the third, the rookie defenseman’s fourth goal of the season.

The Islanders fell to 21-3-3 in back-ends of back-to-back games, still the best record of any NHL team in back-ends over the past three seasons.

KINGS OF THE COLISEUM

The Rangers are the youngest team in the league, with 10 of the 22 players on their active roster 23 years old or younger. Average age on the Rangers’ active roster is 25.2 years old.

Rangers defenseman Adam Fox snapped a 12-game point streak in which he had three goals and 19 assists. It was the third-longest point streak in the NHL this season behind Carolina’s Dougie Hamilton at 14 games and Toronto’s Auston Matthews at 13. 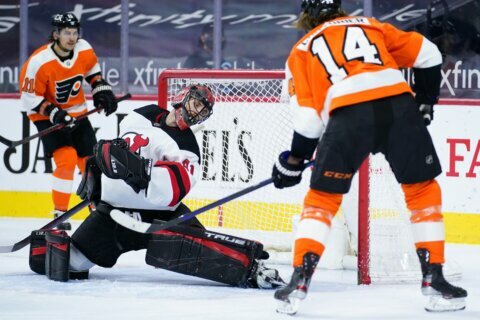 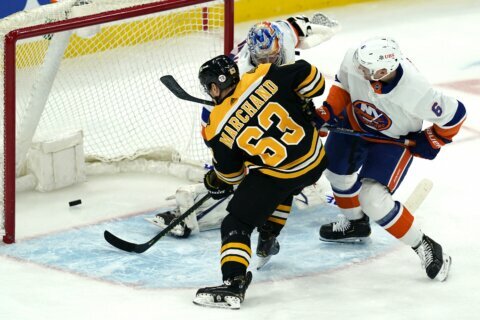