CHICAGO (AP) — Kevin Lankinen has been working with Chicago goaltending coach Jimmy Waite on finding the puck in traffic and being more patient.

He put that practice to good use Tuesday night.

Lankinen made 33 saves, Patrick Kane had two assists and the Blackhawks stopped a four-game slide by holding off the Florida Panthers for a 3-2 win.

“That brings a lot of confidence when you practice something and it develops in your game and you feel really good out there,” Lankinen said. “It was good. It was a good night.”

Dominik Kubalik, Pius Suter and Carl Soderberg scored for Chicago in the opener of a six-game homestand. It was the Blackhawks’ first victory against the Panthers in five games this season.

When the final seconds ticked off, Lankinen raised his arms excitedly before celebrating with the rest of the team. Chicago had dropped six of seven overall.

“Obviously we’d like to kill the game a little bit more, but nice to hang on against a team that’s pretty good at coming back in games,” Kane said.

Anton Stralman and Alex Wennberg scored for the Panthers, who lost for the third time in four games. Chris Driedger made 29 stops.

Florida played without captain Aleksander Barkov, who was scratched because of a lower-body injury. Coach Joel Quenneville said he wasn’t sure exactly when he got hurt, and the team will know more about the situation on Wednesday.

Barkov has six goals and 12 assists in his last 13 games, including two assists during Sunday’s 5-3 loss at Tampa Bay.

“It was tough to watch the beginning of the game,” Quenneville said. “You know you lose a key guy, it’s a good test on the whole group there, but certainly you know the impact that he has on the team. It was noticeable there.”

Stralman got Florida on the board with his third of the season 8:53 into the second period, and Wennberg trimmed Chicago’s lead to 3-2 when he slammed home a power-play goal with 4:38 left in the third.

But Panthers defenseman Aaron Ekblad was whistled for slashing with 2:29 remaining, and the Blackhawks held on.

“We needed the win. We needed something good to happen to us,” coach Jeremy Colliton said.

Chicago went ahead to stay with two in the first period. Kubalik got a slick pass from Brandon Hagel and slid the puck between Driedger’s legs at 6:24, and Suter tipped Nikita Zadorov’s long shot into the net with 1:30 left.

It was Kubalik’s 11th goal of the season. He has two goals and four assists during a six-game point streak.

The Blackhawks opened a 3-0 lead when Kane set up Soderberg’s power-play goal 4:22 into the second. The tap-in play was Soderberg’s first point since he scored at Dallas on March 11.

The Blackhawks honored Kane for reaching 1,000 career games March 9 at Dallas. It was a relatively small pregame ceremony, with the team planning to throw another party next season when it hopes to have its usual raucous crowd at the United Center.

Kane was joined on the ice by his parents, his girlfriend, Amanda, and infant son, Patrick Timothy Kane III. He was presented with a commemorative print and a crystal. The team also showed a video with images from throughout his career.

Quenneville, who coached Kane to three Stanley Cup titles in Chicago, watched the ceremony from Florida’s bench while the rest of his team was in the locker room.

“He keeps getting better,” Quenneville said. “It’s an amazing career.”

MacKenzie Entwistle made his his NHL debut for Chicago, replacing Reese Johnson in the lineup. Entwistle, a 21-year-old forward, was acquired in the July 2018 multiplayer deal that moved Marian Hossa’s contract to Arizona. 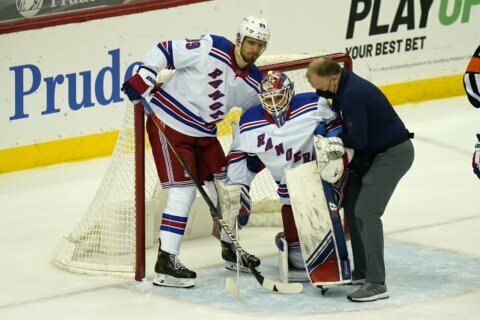