“Big plays at big times,” Calgary coach Darryl Sutter said about 37-year-old Giordano. “The goal, obviously, is a big play … but he played heavy minutes and did a great job.”

Matthew Tkachuk, Derek Ryan and Christopher Tanev also scored, and Rasmus Andersson had two assists. The Flames improved to 15-13-3, winning for the fourth time in five games since Sutter returned as coach after Geoff Ward was fired.

“We checked well and we gave up very few odd-man rushes,” Sutter said. “It was not a track-meet game at all. We have a team that can play together. If we just eliminated little mistakes in our game and stay out of the penalty box, I think that we can play with them.”

Mitch Marner, Jason Spezza and Alexander Kerfoot scored for Toronto, and Frederik Andersen stopped 14 shots. The Maple Leafs, coming off a four-day break after dropping a pair last weekend, have lost six of seven to drop into a tie for the North Division lead with Edmonton. They had a nine-point division lead March 3.

“No one’s losing their abilities over night,” Andersen said. “It’s just a matter of putting it together. It starts with me looking inwards and do what I can do to play my best and help the team.”

The teams will complete the two-game set Saturday night.

Sporting their white and green St. Pats uniforms, the Maple Leafs tied it at 3 when Marner wristed his 12th past Markstrom at 3:48 of the second.

Toronto defenseman Justin Holl then rocked Johnny Gaudreau with an open-ice hit that drew Calgary’s attention, with Flames defenseman Juuso Valimaki going off for roughing. Holl would eventually drop the gloves with Tkachuk in a strange fight where the defenseman went to pick up his gloves after originally dropping them when challenged before both players eventually started swinging their fists.

Calgary then connected three seconds after Ilya Mikheyev went off for holding when Giordano blasted a one-timer past Andersen.

The Maple Leafs got a boost with the return of Wayne Simmonds to the lineup after the winger missed 18 games with a broken wrist. Alex Galchenyuk — the No. 3 overall pick in 2012 now with his seventh NHL organization since June 2018 — debuted for Toronto on a line with John Tavares and William Nylander. 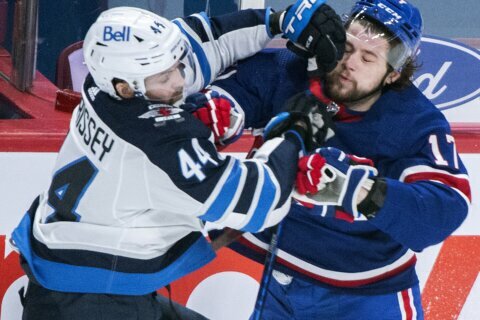 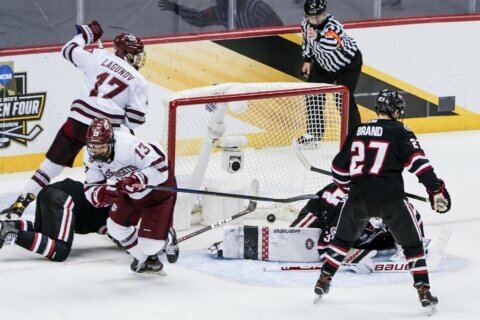