Gustavsson beat the Flames 2-1 on Monday night in his first NHL start. Last in the all-Canadan North Division at 12-20-3, the Senators have earned a least a point in five straight games (3-0-2), and are 5-2 against Calgary this season.

“It was like a normal game for me today,” Gustavsson said. “It felt like I did the hard part the last game, so now it’s just start and play.”

Rookie Josh Norris tied it with at 4:48 of the third with his third goal in four games, Tierney gave Ottawa the lead with 7:59 left, and Nikita Zaitsev added an empty-netter.

Mark Giordano scored for Calgary, and Jacob Markstrom made 28 saves. The Flames dropped to 15-16-3.

“You sling it on net a couple of times, and if you can hang on to it long enough you can wear the other team down,” Senators coach D.J. Smith said said. “I thought, eventually, we did that.”

On the go-ahead goal, fatigued Flames defenseman Noah Hanafin — who played a 3:12 shift thanks to Ottawa’s pressure — failed to clear the puck out of Calgary’s zone, and Tierney fired a rebound off a Thomas Chabot shot past Markstrom.

Ottawa tied it when Evgenii Dadonov won the puck on the forecheck behind the Calgary net thanks to some strong forechecking. Dadonov put the puck in front for Norris to beat Markstrom for his eighth goal of the season.

The Flames went 13 minutes without a shot at one point in the third period. They have scored just twice in their last three games.

“That’s just the way the puck possession was, and we weren’t as good on our recovery or our management part of it,” Flames coach Darryl Sutter said. “It’s so easy for everybody to dissect it, but when you’re not scoring, those wee little games within a game are magnified.” 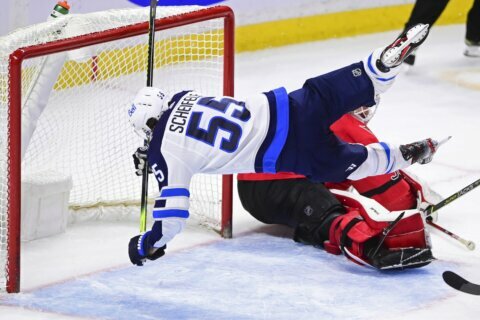