UNIONDALE, N.Y. (AP) — The New York Islanders needed some extra time to get their latest win and keep piling up the points.

Anthony Beauvillier scored the deciding goal in a shootout and the Islanders beat the Boston Bruins 2-1 on Tuesday night for their sixth straight victory.

The Islanders are 8-0-1 in their last nine for their longest point streak since a franchise-record 17-game stretch early last season.

“In a shortened season you want to come away with points and we’ve found a way to do that last couple of weeks here,” said Brock Nelson, who scored in regulation. “Nice to get this one in a shootout and just a good feeling in the room.”

Beauvillier beat Halak top shelf with a backhand in the third round of the tiebreaker. Semyon Varlamov then denied Brad Marchand to preserve the Islanders’ first win in five games beyond regulation this season. Jordan Eberle scored for New York, and David Pastrnak converted for Boston in the first round.

“You never know what he’s going to do — he’s a skilled guy,” Varlamov said of Marchand. “He has a lot of moves. He tried to beat me five-hole and I stopped that one.”

Varlamov made 32 saves and Barry Trotz became the third coach in NHL history to reach 1,700 games behind the bench. New York beat Boston for the fourth time in four meetings this season, all at home. The Islanders also improved to 11-0-2 at Nassau Coliseum, remaining the league’s only team without a regulation loss at home.

Pastrnak scored for Boston, which lost its second straight and fell to 3-5-2 in its last 10 games. Jaroslav Halak finished with 26 saves.

“I thought we were the better team. Didn’t have much luck around the net,” Bruins coach Bruce Cassidy said. “I liked our team’s effort from start to finish. … Had a few opportunities to win it in overtime but didn’t. As a coach, you’re never displeased when your team goes out and plays a strong, structured hockey game. We just couldn’t finish enough plays or one more play.”

Both teams had opportunities in the 3-on-3 overtime. Beauvillier had a chance on a 2-on-1 with 2:12 left in the extra period, but Halak made a sprawling save. The Bruins went down the other end and Marchand’s shot hit the post and went out of play 20 seconds later.

Nelson tied the score during an Islanders power play late in the second period. He got a pass from Jean-Gabriel Pageau and quickly put it past Halak from the inside edge of the left circle for his 10th with 3:42 left.

“Just trying to go out there and keep things simple, but also have the confidence to go out there and make plays,” Nelson said of his third goal during a season-high four-game point streak. “Maybe (the scoring) didn’t come easy at the start. Didn’t try to change anything, just stick with it.”

The Bruins outshot the Islanders 12-8 in the first, including an 8-0 edge during a two-minute stretch just past the midpoint of the period.

Eberle hit a goal post with a shot nearly eight minutes in, and Boston’s Nick Ritchie hit the right post with a one-timer from the right circle with 1:46 left.

With the Islanders’ Anders Lee off for tripping late in the first, the Bruins took advantage. Varlamov was falling forward as Pastrnak fired a slap shot from the right point inside the post for his 11th with 28 seconds left. It was Pastrnak’s 400th career point.

Scotty Bowman is the all-time leader with 2,141 games coached, and Florida coach Joel Quenneville is second with 1,721 after the Panthers’ win Tuesday night.

Trotz coached 1,196 games with Nashville, 328 with Washington and now 176 with the Islanders.

“It means that I’m old,” Trotz joked about his milestone. “I’ve worked for three outstanding general managers and to me, we’ve had a lot of victories between the (four) of us.”

The Bruins were 0 for 12 on the power play over their previous six games. They finished 1 for 2 against the Islanders.

New York also went 1 for 2 after going 0 for 6 with the man advantage in its previous four games.

Ryan Pulock played in his 221st consecutive game, taking sole possession of second place on the Islanders’ list for defensemen. He was previously tied with Bryan McCabe. Pulock also moved into a tie with Richard Park for the 10th-longest streak overall in franchise history.

Bruins: Host the New York Rangers on Thursday night to open a two-game set before a four-game trip.

Islanders: Host New Jersey on Thursday night to open a three-game series with the Devils, including two on the road. 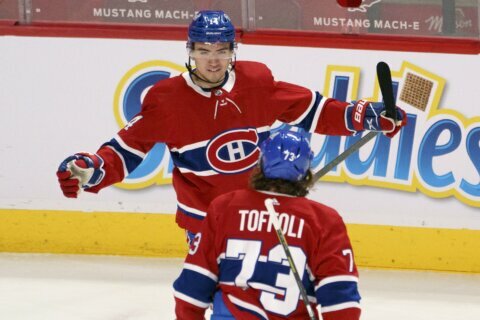 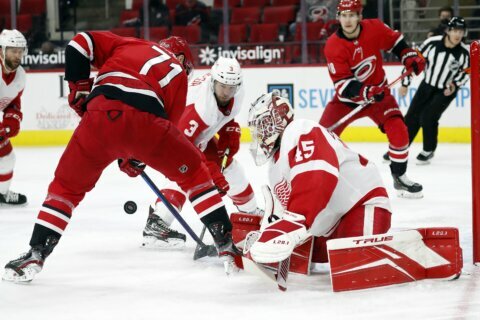