Artemi Panarin rejoined the New York Rangers for practice in Boston on Wednesday after taking a two-week leave of absence.

Coach David Quinn said Panarin won’t play Thursday night against the Bruins and his timeline for getting back to game action is unclear. But there’s a buzz around the Rangers that their highest-paid and best player is back.

Panarin left the team Feb. 22 after a Russian tabloid printed allegations from a former coach that he attacked a woman in Latvia almost a decade ago, which he denies.

The team called it a fabricated story designed to intimidate Panarin for his political views. Andrei Nazarov, a former NHL enforcer who coached Panarin in the Kontinental Hockey League, said he was motivated to speak about the alleged incident because he disagreed with Panarin’s repeated criticism of the Russian government.

Panarin, 29, has been a vocal critic of Russian President Vladimir Putin and earlier this year posted his support on social media for opposition leader Alexei Navalny.

Trouba said Rangers players talked about Panarin’s situation and welcomed him back with open arms, calling it “business as usual.”

Panarin, who was an MVP finalst last season, has missed the past eight games. The Rangers are 4-4 without him.

“Obviously we miss his production and what he brings on the ice, but there’s so many different elements that he brings off the ice,” defenseman Ryan Lindgren said. “He’s a fantastic teammate and such a nice guy, and we definitely miss him a lot.”

Panarin is in his second season with the Rangers after signing an $81.5 million, seven-year contract with them in 2019. He was New York’s leading scorer when he stepped away.

Quinn isn’t sure where Panarin will go in the lineup when he gets his legs back enough to play. Panarin was not made available as part of the Rangers’ video media availability Wednesday. 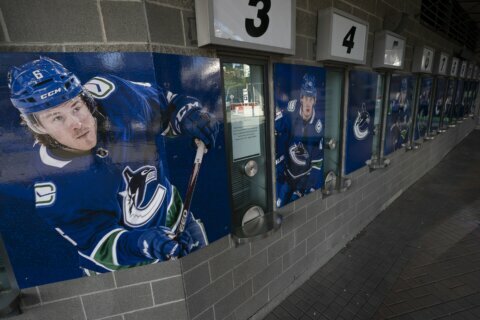