Alex DeBrincat had the only successful attempt in the tiebreaker. Cam Atkinson, Patrik Laine and Jack Roslovic came up empty for Columbus in the shootout against Kevin Lankinen.

Carl Soderberg had a goal and two assists for Chicago, which won for the fourth time in five games. Dominik Kubalik had a goal and an assist, and Lankinen had 25 saves.

Columbus erased a 5-3 deficit in the last part of the third period, but it squandered a couple of close scoring chances in overtime.

“(We) just feel like we’re giving up these leads late in the third and they’re big points, obviously,” Kane said. “We did it one of the games in Chicago and did it tonight. You’re up 5-3 you want to finish off the game. They just kept coming, had some chances and ended up tying it up. Nice to get two points but would’ve been nice to give them nothing.”

Laine and Oliver Bjorkstrand each scored twice for Columbus, and Atkinson had a goal and an assist. Roslovic and Seth Jones had two assists apiece, and Joonas Korpisalo made 29 stops.

The inconsistent Blue Jackets lost for the fourth time in their last five games.

“Any points is better than no points, so I thought we did a lot of good things,” Atkinson said. “We fought our way to crawl back into it.”

Chicago struck first on a power play in the first period. Soderberg slid the puck past Korpisalo amid some traffic in front of the Columbus net.

Kane then made the most of a Columbus turnover, making it 2-0 with his ninth of the season. Kane crashed into the back boards after finishing the play.

Atkinson got his eighth goal 11:34 into the first, outracing Duncan Keith on a rush. Laine rifled in a one-timer on a power play 48 seconds into the second period, tying it at 2.

Brandon Hagel got his first career goal for Chicago at 8:12 of the second, but Laine tied it again with another power-play goal.

“A lot of what they did to get back in the game is they were good on the power play,” Chicago coach Jeremy Colliton said. “They don’t get so many power plays and don’t convert, it’s a different game. There’s a lot of good we can take from the game, we’ll address where we thought we left them off the mat. But if we keep getting two points, we’ll end up where we want to be.”

The Blue Jackets put goalie Elvis Merzlikins on injured reserve again Tuesday after he got hurt in Saturday’s loss to Nashville. After a hard fall, Merzlikins skated off slowly favoring his left arm and shoulder and was relieved by Korpisalo.

Merlikins missed five games earlier this month with an upper-body injury. Matiss Kivlenieks was bumped up from the taxi squad to back up Korpisalo.

FANS WILL BE BACK

The Blue Jackets got permission from the city and state to start allowing a limited number of fans at games in Nationwide Arena beginning March 2 — a year and a day after the last game with fans. About 2,000 spectators will be allowed in.

Blue Jackets defenseman Zach Werenski missed his fourth game with a lower-body injury. Defenseman Michael Del Zotto was out after he got hurt Saturday. Defenseman David Savard returned after missing one game with an illness.

The teams wrap up a two-game series Thursday night in Columbus. 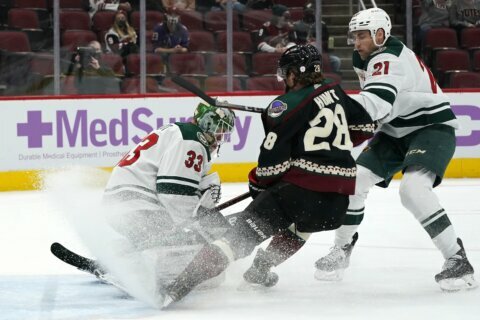 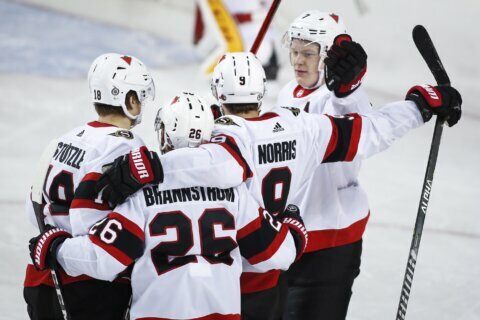 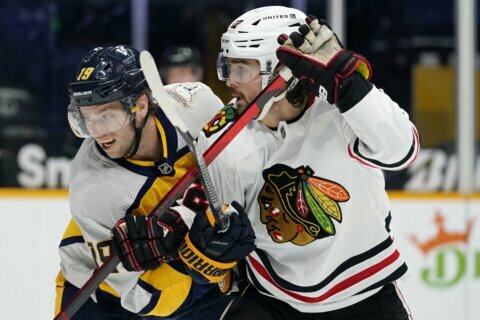