Nino Niederreiter scored at 17:25 of the third period to force overtime and the shootout for Carolina, which squandered a 2-1 lead to start the third period, but hung on to beat Dallas for the second time in as many nights.

Jordan Staal and Brock McGinn also scored for the Hurricanes, who returned Thursday from a pause due to COVID-19 concerns that led to four games being postponed. Carolina won all three games in its return despite being shorthanded with multiple key players out.

“You need everyone throughout the lineup,” Staal said. “And not the same guys every night. It’s just not going to work that way. … We had some some big moments from key guys, and just found a way to grind one out.”

Reimer finished with 26 saves for the Hurricanes, including five in overtime. That included some big stops after Dougie Hamilton had taken a holding penalty to give the Stars the man advantage.

“Luckily in OT, I was able to see a few and the puck was sticky,” Reimer said. “That was a nice way to play it out.”

Benn, Jamie Oleksiak and Andrew Cogliano scored for Dallas. Khudobin finished with 37 saves, getting the start after being pulled in the second period of Saturday’s loss after allowing four goals on 16 shots in the 4-1 loss.

“We probably make life a little too tough on him,” Benn said. “But once again, (he) played a heck of a game. We’ve got to be better in front of him for sure.”

The Stars added defenseman Andrej Sekera to the NHL’s COVID-19 unavailability list Sunday. That came after Sekera had played in all five of Dallas’ games so far, including 17:35 of ice time in Saturday’s loss to the Hurricanes.

Carolina is awaiting the returns of defenseman Jaccob Slavin, and forwards Teuvo Teravainen, Jordan Martinook and Warren Foegele after they came off the list Friday and Saturday.

Benn had been sidelined with a lower-body injury and hadn’t played since the Jan. 22 opener, but the Stars captain made an impact in his return.

Benn assisted on Dallas’ first goal by firing a shot Reimer couldn’t secure with his glove, with Oleksiak pouncing on the loose rebound near the post. That came minutes after Benn had leveled Staal with a jarring hit from behind near early in the second, sending Staal into the locker room until deep into the period.

He followed by scoring on a wraparound chance at the 12-minute mark of the third, pushing the puck under Reimer for a 3-2 lead.

“When Jamie got his legs,” Dallas coach Rick Bowness said., “he was a dominant force out there.”

Carolina also lost goaltender Petr Mrazek and forward Max McCormick to injuries in Saturday’s win. The Hurricanes placed McCormick on injured reserve and recalled goaltender Alex Nedeljkovic and forward Drew Shore from the taxi squad for this one.

For Shore, Sunday’s game marked his Hurricanes debut and his first NHL action since April 2017 while playing with Vancouver.

Stars: Dallas visits Columbus on Tuesday for two games before returning home to begin an eight-game homestand that includes a pair of games against the Hurricanes.

Hurricanes: The Hurricanes begin a six-game trip Tuesday at Chicago. Carolina isn’t scheduled to play on its home ice again until Feb. 15. 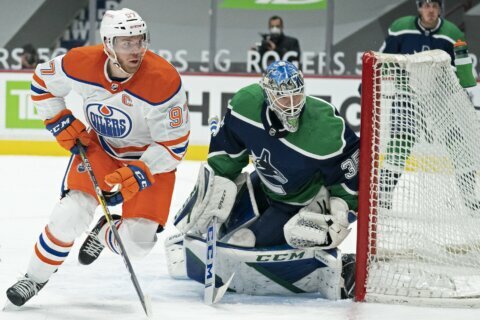