DETROIT (AP) — Tyler Bertuzzi scored 15 seconds into overtime and Bobby Ryan became the first player to score four times in his first three games with Detroit, leading the Red Wings to a 3-2 win over the Columbus Blue Jackets on Tuesday night.

Bertuzzi was credited with the winning goal after the puck went off him and into the net following a rebound off Dylan Larkin’s shot.

“I’m just going hard to the net and obviously it went in off my body,” Bertuzzi said. “I’ll take it.”

Ryan had a tiebreaking goal late in the second after Anthony Mantha pulled Detroit into a 1-all tie with a power-play goal early in the period.

“Bobby has been unreal for us, obviously,” Bertuzzi said. “But all the new guys have fit in and done a great job.”

Jonathan Bernier made 22 saves for the Red Wings, who split their opening four-game homestand in a relatively strong start after easily being the NHL’s worst team last season.

“We want the puck this year,” Larkin said. “Last year, there was times when no one wanted it.”

Columbus’ Boone Jenner scored 1:38 into the game. Alexandre Texier tied it 5:04 into the third period on a goal that stood after the Red Wings challenged, hoping it would be negated by goaltender interference.

Elvis Merzlikins stopped 24 shots for the Blue Jackets, who barely got settled in on their bench during the overtime before it was time to go to the dressing room.

“It was so quick,” Columbus center Liam Foudy said. “We saw the light go off and no one was happy.”

Ryan is providing quite a return on the $1 million, one-year investment general manager Steve Yzerman made in the 33-year-old forward in October.

Ottawa put him on waivers for the purposes of a buyout it later finalized with two years left on his contract after he won the Masterton Trophy, the NHL’s award for perseverance, for publicly sharing his battle with alcohol. Ryan missed more than two months of last season after entering the NHL/NHLPA players assistance program.

A decade ago, Ryan ranked among the league’s top scorers when he had 35 and 34 goals in consecutive years.

And now, he has four goals in three games.

“I’ve really been impressed by his skating and with his skill level and his great hands,” coach Jeff Blashill said. “And when he’s skating well, he can really use that skill set.”

Columbus was 0 for 2 on the power play. It has failed to score on any of its seven power plays over four games this season.

With 56 games squeezed into the pandemic-altered season, working on weaknesses is a challenge.

“We don’t have much time to practice,” coach John Tortorella said.

The NHL announced games on Tuesday night would use pucks made for last season, temporarily ditching microchipped pucks after concerns were raised about their performance.

“There was no doubt the pucks were not performing up to NHL standards,” Blashill said. “We never used it as an excuse, but there was definitely frustration from everyone I spoke with.”

The Blue Jackets have not had newly acquired center Mikko Koivu in the lineup this season due to NHL’s COVID-19 protocols. Detroit center Robby Fabbri and winger Adam Erne were out for a second straight game due to the protocols after both played in the first two games of the season.

Fox Sports Ohio analyst Jody Shelley was not a part of the Blue Jackets’ broadcast, citing an abundance of caution.

Columbus is headed home for the first time this season, hosting the defending Stanley Cup champion Tampa Bay Lightning on Thursday night. The Blue Jackets also will face Florida on their homestand.

The Red Wings go on the road for the first time this season, playing Chicago for the first of two games on Friday night. Detroit also is scheduled to visit Dallas on Jan. 26 and 28. The Stars had their first four games postponed after 17 players tested positive for COVID-19. 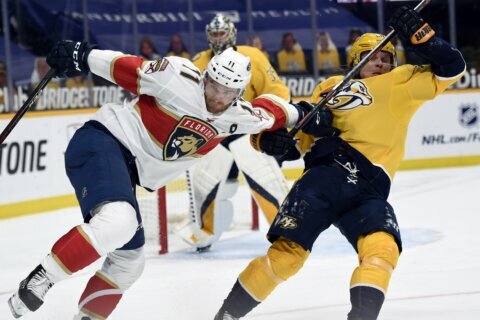 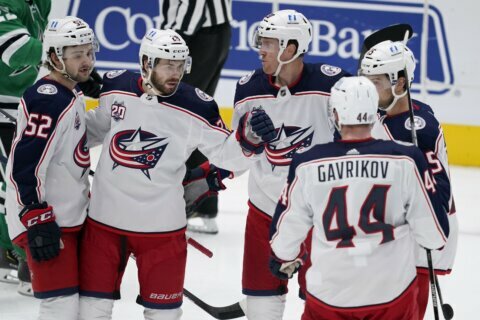 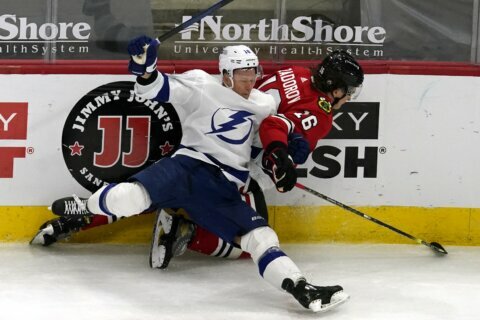