Peter Laviolette pulled the mask away from his face to bark out instructions while pointing every which way with his…
Listen now to WTOP News WTOP.com | Alexa | Google Home | WTOP App | 103.5 FM

Peter Laviolette pulled the mask away from his face to bark out instructions while pointing every which way with his stick, then put the mask back on and skated around to show his new players what to do.

It was the first day of training camp for Laviolette and the Washington Capitals and most of the NHL. With the regular season starting next week, there’s no time to waste. Camps are now open for the league’s 31 teams and they will last just 10 days.

There are no exhibition games to tune up before the pucks drop for real.

“There’s so many things that you want to touch on, and the time is limited,” Laviolette said after the first on-ice session Monday. “It’s almost like fear when you get home that maybe you didn’t get everything done or you didn’t get in what you were supposed to get done.”

While the seven teams that didn’t make the playoffs got a few days’ head start, everyone will be in the same grind when the season begins Jan. 13. After completing last season in quarantined bubbles, hockey will open the season with the coronavirus pandemic still raging for a 56-game regular season scheduled to run until May 8.

“You get a fresh start,” said Jeff Skinner of the Buffalo Sabres, who haven’t played a game since March. “When you get to take a lot of time off, it sort of builds that anticipation to when you can get back, and now we’re here and it’s an exciting time.”

It’s also different. Coaches couldn’t meet with players in person until camp, there are health and safety protocols to follow and there is daily COVID-19 testing.

Columbus Blue Jackets coach John Tortorella said he’d emphasize a major point to players about how to approach training and playing this season: “There is no complaining about anything.”

That includes the length of camp, which is even shorter than eight years ago when a lockout cut the season to 48 games. Few seem worried about no preseason games.

“Most players would argue that camps are a little bit long anyway,” Winnipeg Jets captain Blake Wheeler said. “It’ll be nice to get right to it, get up to game speed as fast as we can and then hit the ice for games that matter.”

In a reminder that the pandemic is still making an impact on the sport, three NHL teams have to find new places for top minor leaguers to play. The American Hockey League announced that three teams will opt out of this season, forcing St. Louis to shuffle prospects to Utica and leaving Nashville and Florida to figure out a Plan B.

Rather than beginning camp with a hectic scramble among several groups at their practice facility, Sidney Crosby and the Pittsburgh Penguins worked inside spacious PPG Paints Arena. Things were so quiet that coach Mike Sullivan’s instructions could be heard clearly all the way up in the rafters, even though he never raised his voice.

“Almost everything feels different, to be honest with you, as far as the surroundings and wearing masks and socially distancing,” Crosby said. “But the excitement and the anticipation feels the same with getting ready to play.”

When the Penguins host Philadelphia on opening night, they won’t have forward Kasperi Kapanen, one of a few players dealing with immigration issues that caused them to miss the start of camp. Buffalo’s Linus Ullmark and fellow goaltender Anton Khudobin of Dallas were among those not available yet.

“There was a lot more teaching,” Cooper said. “There’s so much hype that goes into the first day, I think guys usually are just so excited to be out there and they’re all screaming around, so we kind of designed a practice to take care of that. But because it’s such a short turnaround, we had to do a little bit more systems stuff than we normally would do.”

Across Florida, the Panthers set up equipment outside to take advantage of the warm climate. Elsewhere, stars like Winnipeg’s Patrik Laine and Columbus’ Pierre-Luc Dubois took the ice after an offseason of questions about whether they would still be with their teams.

A few absences stood out, like captain Jonathan Toews in Chicago, top-line center Mika Zibanejad with the New York Rangers and newest Capitals defenseman Zdeno Chara. Laviolette said Chara will join the team soon after quarantine, but information on most players is limited for now — another layer of secrecy to start a new season.

“I’ve been told from our team and from the league, when a player is not on the ice during training camp, we’re supposed to say he’s not available today,” Philadelphia coach Alain Vigneault said. “I think once the season starts, which is only a few days away, then we’ll be allowed to be a little more specific.” 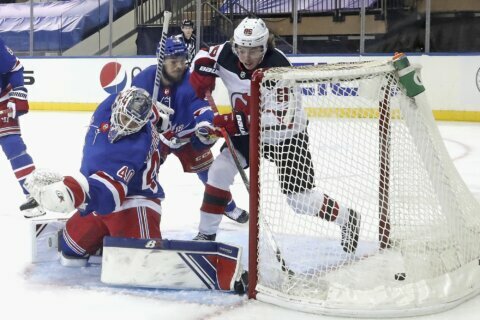 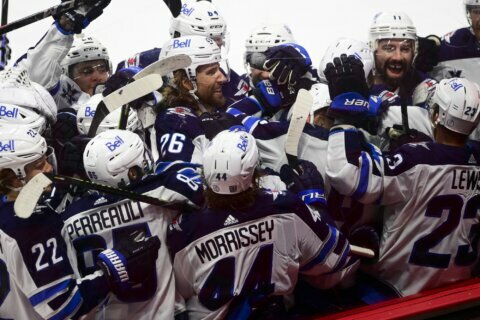 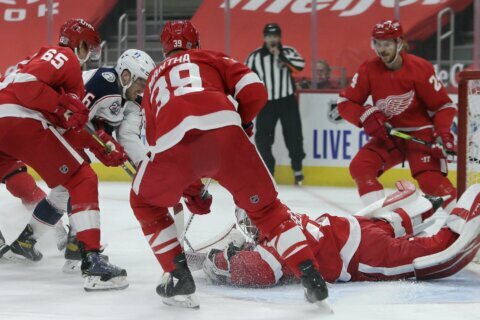