“Definitely I’ve had some success against him. I can’t tell you what it is, just shooting the puck and it’s going in the net right now. So it’s good,” said the right-winger, who now has nine points (six goals, three assists) this season.

“It was a great win. It’s not easy to beat a team after you’ve beaten them twice. Their team was extremely hungry tonight,” said Canucks coach Travis Green.

Elias Pettersson scored and had an assist for Vancouver, while Tanner Pearson tallied a goal and Quinn Hughes chalked up two assists.

For the third game in a row, the Senators outshot the Canucks, this time by a margin of 36-to-25. Vancouver netminder Braden Holtby weathered the onslaught, making 35 saves.

At the other end of the ice, Matt Murray stopped 21-of-25 shots as Ottawa dropped its seventh game in a row.

Despite the final result, Senators coach D.J. Smith liked much of what he saw Thursday.

“We played the right way. I thought we played winning hockey,” he said. “We didn’t win tonight but that’s our best effort of the three games for sure. … If we play that hard every night we’re going to start to win games.”

NOTES: Tkachuk left the ice in a rage in the final minute after dropping the gloves with Vancouver’s Zack MacEwen. Both were given five-minute major penalties for fighting. Tkachuk continued having words with the Canucks bench as he headed for the dressing room, smacking the wall on his way down the tunnel. … Adam Gaudette replaced Jake Virtanen in the Canucks lineup. Virtanen was a healthy scratch. … Ottawa defenseman Josh Brown played his 100th regular-season game.

Senators: At Oilers on Sunday.

Canucks: At Jets on Saturday. 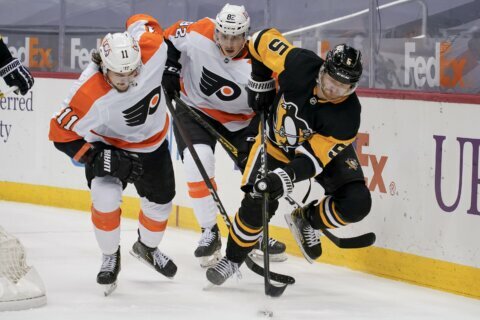