Hockey is set to return Jan. 13 after the NHL and players completed a deal Sunday to hold a 56-game season that would include playoffs lasting into July to award the Stanley Cup.
Listen now to WTOP News WTOP.com | Alexa | Google Home | WTOP App | 103.5 FM

Hockey is set to return Jan. 13 after the NHL and players completed a deal Sunday to hold a 56-game season that would include playoffs lasting into July to award the Stanley Cup.

The league’s Board of Governors voted to approve the agreement that was backed by the NHL Players’ Association executive board Friday night. The regular season is scheduled to go until May 8 with a 16-team playoff to follow.

“It’ll be exciting to get going again,” San Jose general manager Doug Wilson said on a video call. “It’s been a challenging year and journey.”

The season will be highly unusual in at least one respect: There will be four divisions — North, South, East and West — and all play will be within them through the first two rounds of the playoffs to minimize travel and the potential for the coronavirus to disrupt the season. The North Division contains only the seven Canadian teams.

“It is the current plan to play games in the home arenas of participating teams while understanding that most arenas will not, at least in the initial part of the season, be able to host fans,” the NHL said.

The league is allowing for the possibility of playing games at neutral sites if needed. Final details on where the Canadian teams will play were still pending until there are agreements with federal and provincial health officials.

Still, the hurdles won’t be enough to prevent the season from starting without a quarantined bubble.

“The National Hockey League looks forward to the opening of our 2020-21 season,” Commissioner Gary Bettman said in a statement. “While we are well aware of the challenges ahead, as was the case last spring and summer, we are continuing to prioritize the health and safety of our participants and the communities in which we live and play.”

The NHL completed last season in bubbles in Toronto and Edmonton, Alberta, with players, coaches and staff isolated from the general public and virus-tested daily.

“The players are pleased to have finalized agreements for the upcoming season, which will be unique but also very exciting,” NHLPA executive director Don Fehr said. “During these troubled times, we hope that NHL games will provide fans with some much-needed entertainment as the players return to the ice.”

Most of the league will open training camp Jan. 3. The seven teams that didn’t make the playoffs last season can start as soon as Dec. 31. There won’t be any exhibition games before play gets going for real.

Critical dates, such as the trade deadline and latest possible day for the end of the Stanley Cup Final, and the full schedule are expected to be released in the coming days. In the three U.S. divisions, teams will play eight times against each other.

“It’s not easy,” said Wilson, whose Sharks will hold training camp in Scottsdale, Arizona, given restrictions on sports in Santa Clara County in California. ”The complexities of this I think far outweigh what they had to do last year on the restart because you’re now traveling across states and you’re going to different cities and different things. But the way it ended up with the divisions, it makes sense to me on paper.”

As far as the divisions, Boston, Buffalo, New Jersey, Pittsburgh, Philadelphia, Washington and the New York Islanders and Rangers are in the East; Carolina, Chicago, Columbus, Dallas, Detroit, Florida, Nashville and Tampa Bay are in the Central; and Arizona, Anaheim, Colorado, Los Angeles, Minnesota, St. Louis, San Jose and Vegas are in the West. 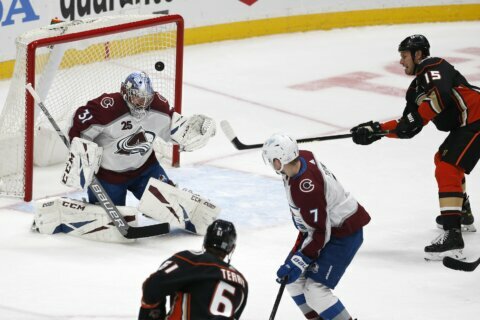 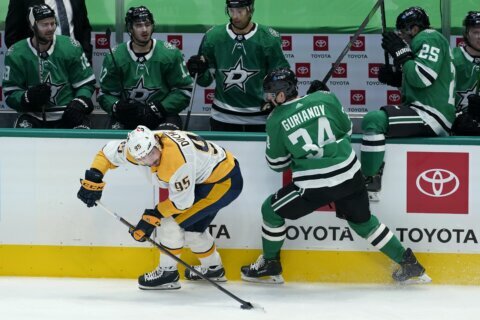 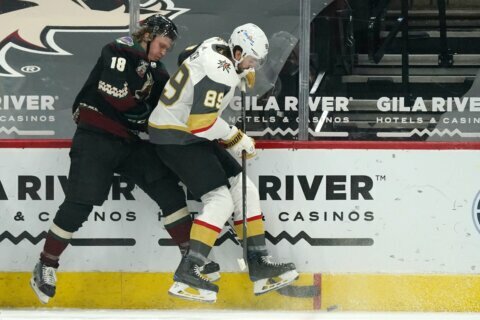