Columbus, Montreal make only player trade on Day 1 of draft

The Columbus Blue Jackets and Montreal Canadiens completed a deal, and that was about it. Not much at all when…
Listen now to WTOP News WTOP.com | Alexa | Google Home | WTOP App | 103.5 FM

The Columbus Blue Jackets and Montreal Canadiens completed a deal, and that was about it.

Not much at all when it comes to trades on the first day of the virtual NHL draft.

The Blue Jackets getting center Max Domi and a third-round pick from the Canadiens for winger Josh Anderson on Tuesday was the only trade involving established NHL players. Calgary traded down twice, first with the New York Rangers, then Washington, but more moves will have to wait.

“There hasn’t been a lot of trades around the league because a couple reasons: the salary cap No. 1, the free agent pool is maybe not as deep this year as it has been in past years and so people are hanging on to their players a little bit more,” Carolina GM Don Waddell said. “I think it’s on a lot of people’s minds as they’re trying to make their team better or, for that matter, trying to shed players.”

Capitals GM Brian MacLellan, who moved up from No. 24 to 22 to select playmaking forward Hendrix Lapierre, didn’t blame the lack of trade activity on not being all together in the same arena.

“It was a little different, but we still had sort of the same setup,” MacLellan said. “I think you have the draft phones at your table, the lines that went directly to their draft room wherever they were. Basically, we used cell phones this time more than we would normally on the draft floor.”

Columbus and Montreal got the Domi/Anderson trade done three hours before the New York Rangers took Alexis Lafreniere with the first pick.

Domi joins Columbus after putting up 44 points during the shortened regular season and just three during 10 games of a disappointing playoff performance. It will be the 25-year-old Domi’s third NHL organization after being drafted by and debuting with the Arizona Coyotes before two seasons with Montreal.

“Strengthening our center ice position has been a priority for our club, and we are extremely excited to add a player of Max Domi’s talent and character,” Blue Jackets general manager Jarmo Kekalainen said. “He is a skilled playmaker that also brings grit and competitiveness, and we think he will be a great addition to our team.”

Anderson hasn’t played since December, having his 2019-20 season ended by surgery to repair a torn labrum in his left shoulder. Kekalainen called Anderson “a terrific hockey player and really good person.”

Columbus gambled on keeping Anderson in the 2017 Vegas expansion draft and lost William Karlsson, who went on to become a top-line center for the Golden Knights.

This move recoups some of his value. The third-round pick the Blue Jackets are getting is the 78th overall in this year’s draft, which continues Wednesday with rounds 2-7.

Montreal needed to ante up with the third-round pick to land Anderson because there was so much interest in the 6-foot-3, 222-pounder.

“You don’t just offer a pick just to offer a pick,” Canadiens GM Marc Bergevin said. “That was part of the negotiating, and at the end of the day, that’s the price we were willing to pay, so we got it done.”

Each player is a restricted free agent who needs a new contract for next season. 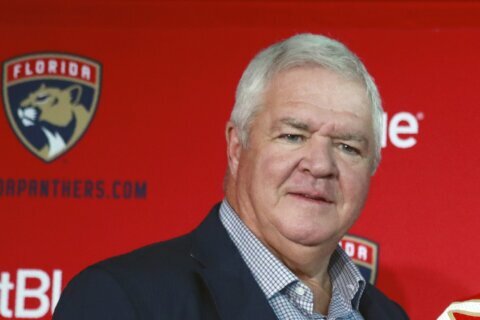