NHL’s final four have gotten deeper with plenty of newcomers

Joe Pavelski was the captain of a team that went to the Western Conference finals last season, playing opposite Patrick Maroon’s team that went on to win the Stanley Cup.

Chandler Stephenson won a Stanley Cup title two seasons ago with the Washington Capitals, the team he was still playing with at the start of this season.

They have all since changed jerseys, now newcomers on teams that made it back to the playoffs — and still inside the NHL bubble in Edmonton as part of hockey’s final four. And they are not alone.

The Dallas Stars, Vegas Golden Knights, New York Islanders and Tampa Bay Lightning all have several players who weren’t on their playoff rosters last year — when none of these teams played this deep into the postseason. Some signed as free agents last summer, others were trade-deadline acquisitions, and there are even a few rookies.

“Every team changes. I think every year’s different,” said Vegas coach Peter DeBoer, a newcomer himself. He was fired by San Jose in December and hired a month later after the Golden Knights parted ways with Gerard Gallant, the coach who took them to the Stanley Cup final in their inaugural season two years ago.

“The core is obviously the same, and the identity of this group is something that’s been consistent since Day One that they were an expansion team, and that’s that they’re going to come and work and compete and be hard to play against,” DeBoer said. “That’s a nice thing that I’ve inherited.”

Pavelski was San Jose’s captain the past four seasons, including a Stanley Cup final appearance four years ago, and spent his first 13 NHL seasons with the Sharks before signing with Dallas last summer.

“These players, such as Joe, generational guys, they know what it takes to win,” Stars general manager Jim Nill said. “And when you get down to crunch time, the playoffs, that’s when the guys start to shine. And you can never have enough of these guys in your dressing room. They know how to win. They’ve been there. They’ve done it.”

Pavelski had a hat trick in the first round against Calgary that was the first in the playoffs for the Stars since moving to Dallas more than a quarter-century ago. Joel Kiviranta, a rookie defenseman who scored one goal in 11 regular-season games, had one in the Game 7 second-round clincher against Colorado, completing his hat trick with an overtime goal.

After a double-overtime Game 7 loss to eventual Stanley Cup champion St. Louis in the second round last year, the Stars also signed free agent Corey Perry after his 14 seasons with the Anaheim Ducks, where he was part of a Stanley Cup title early in his career, and veteran defenseman Andrej Sekera.

Nill was named Wednesday as one of three finalists for the NHL general manager of the year award, along with two other GMs whose teams are still playing — Lou Lamoriello of the Islanders and Julien BriseBois of the Lightning.

“I think guys like Patty (Maroon), guys like Barclay, they kind of allow us to play with our chests a little bit puffed out. We know that we have a little sandpaper in our lineup now and we’re not going to get pushed around,” Shattenkirk said. “I think that was always the focus when you would play against Tampa in the past, was to try to be physical with them and push them out of games.”

Tampa Bay, the 2004 Stanley Cup champ who also went to the final in 2015, was swept in the first round last year after going into the playoffs with the NHL’s best record. Coach Jon Cooper thought the additions last summer who didn’t go through that sweep made a difference this year.

“I think some of the new guys helped out, too, in the Maroons and the Shattenkirks: Guys that weren’t here last year that everybody collectively was like, ’Hey, we’ve got to turn the page on last year,’” Cooper said.

The Golden Knights got goaltender Robin Lehner in a deadline trade, and he stopped 24 shots Tuesday night against Dallas in his fourth shutout this postseason. They also acquired Stephenson in December, and later added veteran defenseman Alec Martinez, who was in his 11th season — all with the Los Angeles Kings, where he won Stanley Cups in 2012 and 2014.

New York hasn’t been to a Stanley Cup final since 1984, a year after winning its fourth title in a row. The Islanders bolstered their lineup with Jean-Gabriel Pageau in a trade from Ottawa, and then signed the forward to a six-year contract extension. That was after trading for veteran defender Andy Greene, and adding goaltender Semyon Varlamov in free agency last summer.

“Lou has been in the game a long time and obviously the two acquisitions we’ve had … he’s had a long history with Andy, and Lou knew a lot about him. And I think that was a pretty easy fit,” Islanders coach Barry Trotz said. “And then with (Pageau), we identified him early. The way he plays, the way he carries himself, his rounded game — all that.” 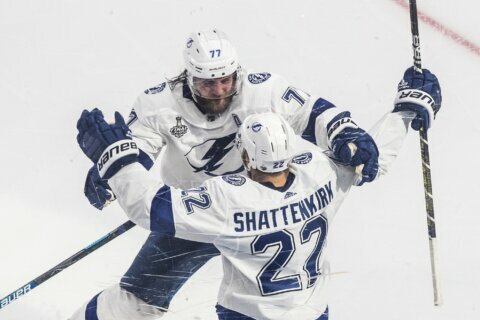 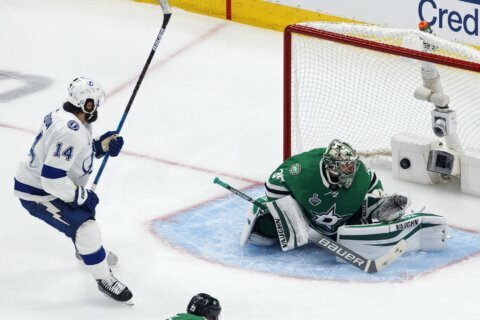