Alex Tuch, got his seventh goal of the postseason, and Mark Stone and Zack Whitecloud also scored to help Vegas take 2-1 series lead.

Lehner got his second career playoff shutout — and the second of the series. He blanked Vancouver 5-0 in the series opener and improved to 7-2 in the return-to-play tournament.

Lehner, acquired at the trade deadline from Chicago in a three-team deal that also included Toronto, was the difference early.

Vancouver came out flying in the first period, outshooting Vegas 16-10 and enjoying a 78-second 5-on-3 power play. Lehner turned aside a wealth of high-quality scoring chances: point-blank one-timers, blasts off the transition, redirects, and loose pucks bouncing through the blue paint.

Tuch scored first at 4:05 of the first period. Racing in full flight through the neutral zone, he split the defense, settled down a bouncing stretch pass from Nicolas Roy and delivered a hard shot past Markstrom into the top corner.

Just 83 seconds later, it was 2-0 when Whitecloud pounced on a loose puck at the right faceoff circle, fired it through traffic and in.

Early in the third, Stone roofed a fluttering puck from the faceoff circle on the power play for a 3-0 advantage. It was his second goal of the series and sixth of the playoffs.

The teams had not played since Tuesday. The NHL did not play its scheduled games Thursday or Friday after players in the Edmonton and Toronto playoff sites made it clear they wanted to make a statement to highlight the issues of social injustice, systemic racism and police brutality.

For Vancouver, the concern Sunday will be Markstrom and puck fatigue. The 30-year-old Swede is expected to start his 14th game in 29 days and his third back-to-back contest. He has been the backbone of the Canucks’ playoff success but has regularly been facing more than 30 shots a night in the post-season.

His backup is Thatcher Demko. Demko has started just 34 games over his first three seasons and has not played in the playoffs except for some mop-up time in the third period in the 5-0 loss.

Vegas has experienced veteran Marc-Andre Fleury in reserve. Fleury has spelled Lehner once in the round-robin series and again for one game in the first round against the Chicago Blackhawks. Vegas coach Peter DeBoer has said the plan is to play both. 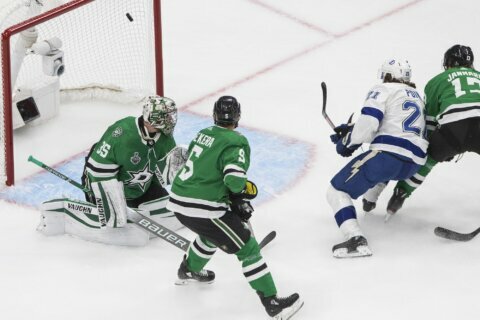 Lightning up 2-0 on Stars, 20 minutes from Stanley Cup