Pearson leads Canucks past Sharks and into 1st in Pacific

VANCOUVER, British Columbia (AP) — The Vancouver Canucks surged past the San Jose Sharks — and took over the tight…

VANCOUVER, British Columbia (AP) — The Vancouver Canucks surged past the San Jose Sharks — and took over the tight Pacific Division.

Tanner Pearson scored on the power play and had an assist, helping the Canucks to a 4-1 victory Saturday night.

Loui Eriksson, J.T. Miller and Quinn Hughes also scored for the Canucks, who won for the 11th time in 14 games and extended their home winning streak to eight games. The victory also moved the Canucks into first place in the Pacific with 58 points, one more than Edmonton, Calgary, Vegas and Arizona.

“Going into the break in a playoff spot is big,” Pearson said. “We’ve got to keep it strong here at home (and) become a better road team here on out.”

Jake Virtanen and Adam Gaudette, playing in his 100th NHL game, each had two assists for Vancouver, who outshot the Sharks 38-17. Thatcher Demko, making his third start in the last 19 games, stopped 16 shots.

“It’s going to be like this through the rest of the games,” Eriksson said. “Tight games and every game is going to be big to get points.”

Barclay Goodrow scored for the Sharks, who lost their third consecutive game. Aaron Dell made 35 saves.

“We pretty much didn’t show up the whole game,” Dell said. “We just stopped everything that was successful. This is pretty much the ramifications of that. I don’t know why it changed or when it changed.”

Pearson gave the Canucks a 2-0 lead at 5:01 of the third period when he deflected a shot by Virtanen past Dell.

The Sharks finally showed some life when Goodrow scored off a scramble at 7:09. Hughes restored Vancouver’s two-goal lead just 37 seconds later when his shot from the blue line ended up in the net.

“In a game like that, you’re peppering their goalie,” Pearson said. “He’s saving them all and they’re not getting any shots. It usually can go one way or another. Good thing it went our way tonight.”

Eriksson’s goal came at 14:05 of the second. Pearson whiffed a shot that sent the puck trickling to the net. Eriksson lifted the stick of San Jose defenseman Erik Karlsson, then batted the puck behind Dell for his fifth goal of the season.

San Jose challenged, arguing Vancouver was offside. The goal was upheld on video review and San Jose was assessed a penalty, but the Canucks failed to score on the power play.

“That was top to bottom another good game,” Canucks coach Travis Green said. “The last two games at home were pretty complete games by our group. We talked about being a committed group, resilient, and we were tonight.”

Sharks forward Kevin Labanc said frustration led to a melee late in the game that saw 60 minutes in penalties handed out.

“We all just want to win so badly,” Labanc said. “We’re kind of stuck in the mud right now. It’s not fun. Tension builds. Next thing you know, stuff like that happens.”

NOTES: Canucks captain Bo Horvat announced on social media that he and his wife are expecting a baby. … Vancouver’s longest home-ice winning streak was 11 games between Feb. 3 and March 19, 2009. … The Sharks’ Joe Thornton played his 1,616th game to pass Larry Murphy for 10th place ion the NHL’s career list. … San Jose forward Marcus Sorensen was a healthy scratch for the first time this season. 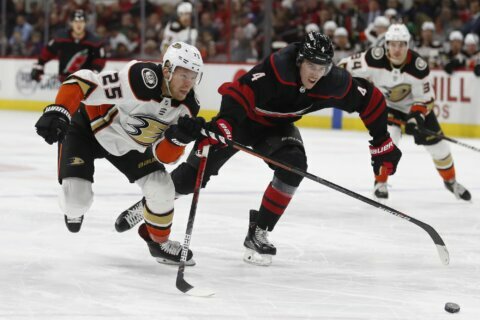 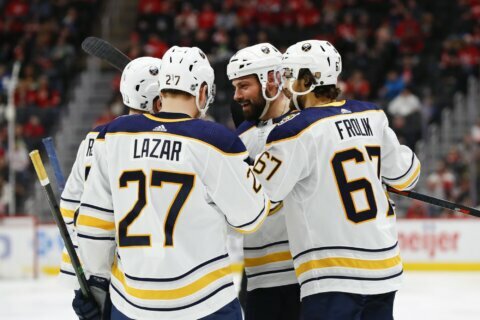