Kane reached 1,000 when he picked up an assist on Brandon Saad’s third-period goal, and the Blackhawks beat the Winnipeg Jets 5-2 on Sunday night for their season-high fifth straight win.

Kane became the 90th player in NHL history to reach the milestone with 5:46 left. The All-Star winger passed from behind the net to Ryan Carpenter in the right circle. Carpenter then fed a wide-open Saad at the left side of the net for an easy tap-in before goalie Connor Hellebuyck could slide across the crease.

The 31-year-old Kane got an extended ovation from the crowd of 21,487 and was mobbed by his teammates after extending his point streak to 10 games. Captain Jonathan Toews, who has 799 points himself, checked with the referees before the game to make sure it was all right for the team to take the ice to congratulate Kane after he hit 1,000.

“That was special,” Kane said. “What a moment. Obviously, everyone coming on the ice and sharing that moment with me. You see some faces in that pile that have been a big part of a lot of those points.

“The team’s rolling right now, too. There’s a lot of good things happening. We’re playing well. Nice to have it come in a win.”

In the midst of the celebration, Saad made sure to pick up the puck for Kane.

“Kinda felt bad for him,” Kane said. “All the guys on the ice came to me and he was in the corner even though he was the one that scored.”

“What can you say? He’s a special player,” Saad said. “It’s been fun to play with him over the years, see his successes and be part of it. It’s pretty neat how the whole team came out and huddled him. It was just a great night.

“We’re playing well, and when you have things like that happen it gives you a boost in excitement.”

Alex Nylander and Erik Gustafsson each had a goal and an assist for Chicago, which has climbed back into the Western Conference playoff race with an 11-4-0 run. David Kampf also scored and rookie Dominik Kubalik added an empty-netter for his 10th goal in his last seven games.

Robin Lehner made 36 saves for the Blackhawks, who killed six Jets power plays. Four of the man advantages were created by minor penalties on Chicago forward Drake Caggiula.

The Jets were ripped 7-1 by Tampa Bay at home on Friday night, but they regrouped and tested Lehner in this one.

“We were in the slot an awful lot,” coach Paul Maurice said. “If you look at the shot map of that game there’s so much more from the dangerous areas.”

Chicago led 2-0 after the first period.

Nylander opened the scoring at 2:51. Alone in front of the net, Nylander took Gustafsson’s feed from the point, faked Hellebuyck to the ice and slid in a backhander from the left side.

Gustafsson got his sixth with 5:49 left on a high screened shot from the left point that sailed past Hellebuyck’s glove and ticked in off the right post.

Lehner was sharp in blocking nine shots as the Blackhawks killed a four-minute Jets power play early in the second. Caggiula had been whistled for interference and unsportsmanlike conduct.

Scheifele plowed through traffic to the net and picked up the puck at the edge of the crease after Nikolaj Ehlers partially fanned on a shot from inside the blue line. Lehner stopped Scheifele’s first attempt, but he tucked in a rebound with a backhander for his 23rd goal.

Kampf increased Chicago’s lead to 3-1 at 9:29 of the third. Rookie Kirby Dach drove to the net and was stopped by Hellebuyck, but Kampf got past defenseman Anthony Bitetto and poked in the rebound.

After Saad’s goal made it 4-1, Laine connected on a point-blank chance with 2:09 left.

Kubalik fired into an empty net with 1:34 to go.

NOTES: Kane, a nine-time All-Star, reached 1,000 points in 953 regular-season games. He is in his 13th season. … The game was broadcast on APTN in the Plains Cree language. The Canadian TV network and Rogers Sportsnet agreed a three-year deal on Dec. 13 to broadcast at least six NHL games each season in Plains Cree. … Jets F Adam Lowry suffered an upper-body injury after being decked by Caggiula with 16 seconds left in the first period. Maurice didn’t have an update, but Lowry left the United Center with his arm in a sling. … Winnipeg D Carl Dahlstrom (upper body) missed his second game, D Tucker Poolman (lower body) sat out his third and D Nathan Beaulieu (lower body) missed his ninth. … The Blackhawks re-assigned F Dylan Sikura, D Dennis Gilbert and F Brandon Hagel to the Rockford of the AHL.

Jets: At Carolina on Tuesday for the second stop on a three-game trip.

Blackhawks: Host Florida on Tuesday. Panthers coach Joel Quenneville will face his former team for the first time. Quenneville guided the Blackhawks to three Stanley Cup titles over 10-plus seasons, but was fired in November 2018. 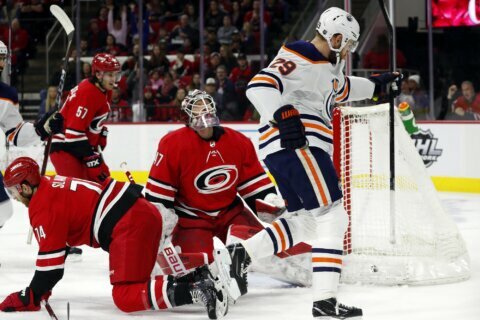 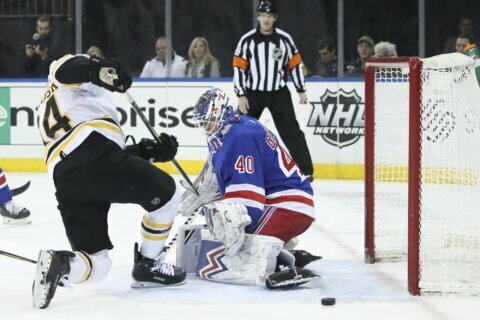 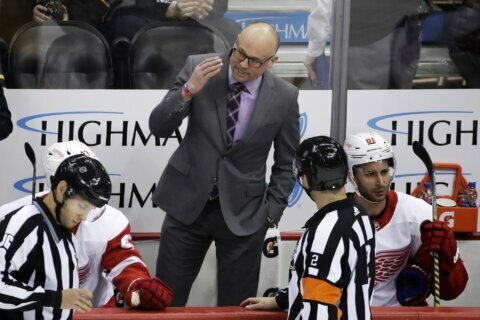