LAS VEGAS (AP) — The Vegas Golden Knights can finally be proud of a third period.

They went into their game against Calgary having held leads in six of their previous eight games and led by two in three of them. However, they’ve struggled to finish and were mired in a five-game losing streak.

The Golden Knights left no doubt on Sunday.

Fleury, who improved to 14-4-1 all-time against Calgary, got his fifth career shutout against the Flames and 58th all time, which moved him into a tie for 19th in NHL history with Jon Ross Roach.

“It’s been a rough patch, everybody’s getting all frustrated and sometimes confidence was so low going into the third (period), if we’re behind (or) even if we’re ahead teams would come back on us,” said Fleury, who is one victory shy from 450 for his career. “We haven’t been scoring as much lately, to see so many guys get goals tonight, it’s good. It boosts everybody’s confidence. Everybody feels a little better and it’s gonna carry to the next game.”

Karlsson, the only player to have appeared in each of Vegas’ 186 all-time regular-season games, had two goals and an assist. He now has 14 points (seven goals, seven assists) over the last 11 games and leads the team with 23 points.

“This is what we need, two huge points for us and now we just look forward,” Karlsson said. “I think we executed very well, just overall a very good game.”

Paul Stastny, Max Pacioretty, Mark Stone and Cody Eakin also scored for Vegas, while Nate Schmidt had four assists, a new career-high for the defenseman for points in a game.

Vegas, which is now 6-2-0 against opponents from the Pacific Division, also snapped a three-game home losing skid and improved to 2-4-3 in its last nine overall.

“We really moved the puck well,” Vegas coach Gerard Gallant said. “We’re all about playing fast and speed and transition and I thought it was real good. It’s good for our team, it’s good for our confidence, now we just gotta continue to play that way.”

Calgary, which has never won inside T-Mobile Arena, dropped to 1-3-0 in the second game of a back-to-back this season after losing in Arizona on Saturday.

“I thought we battled through 40 (minutes), and had a tough one in the final 20,” Calgary coach Bill Peters said. “It was a little deflating in that regard. It feels like it’s just hard to get (the puck) to go in right now.”

The Golden Knights got on the board midway through the first period when Karlsson skated in on an odd man rush with Max Pacioretty but kept the puck and fired it past Cam Talbot, who finished with 31 saves and dropped to 1-5-0 this season.

Stastny notched his 698th career point, when he gracefully deked around Mark Giordano and fired a wrist shot by Talbot midway through the second period, while Pacioretty seized momentum for the Golden Knights by making it 3-0 early in the third.

Eakin scored the most meaningful goal of the night, after struggling to find the back of the net through the first 21 games. Eakin capitalized took a pass from Jonathan Marchessault and flipped it past Talbot with a little more than five minutes left for his first goal of the season.

“It felt good,” said Eakin, who now has 99 career goals. “I’ve been doing it long enough and bad stuff happens where you go through something like that you can just do what you do best. Sometimes when you go through a rut like that where you’re not producing, things get a little tougher and you feel like you’re skating in sand. It’s nice to get that one.”

Mark Stone snapped a six-game scoreless drought with a one-timer from one knee over Talbot’s stick to make it 5-0, and Karlsson’s second goal of the game came on a backhand with 2:31 left in the contest.

NOTES: Vegas F Ryan Reaves played in his 600th career game. … After clearing waivers earlier Sunday, F Brandon Pirri was assigned to Chicago of the AHL, along with forward Nicolas Roy. … Calgary sent Alan Quine to Stockton and called up Dillon Dube prior to the game. … Flames C Sam Bennett, who missed two games in October with a lower body injury, was a late scratch. … Toronto coach Mike Babcock sat in the press box, as his Maple Leafs face Vegas on Tuesday. 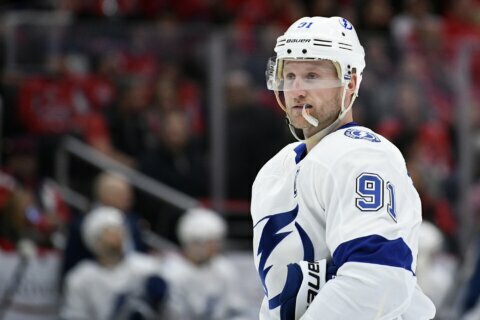 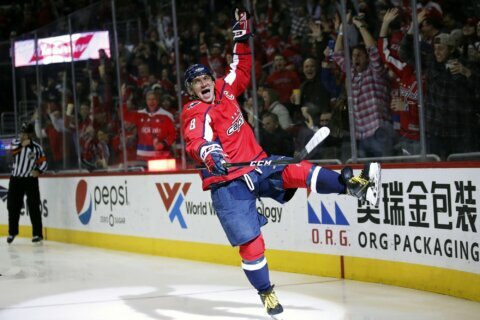 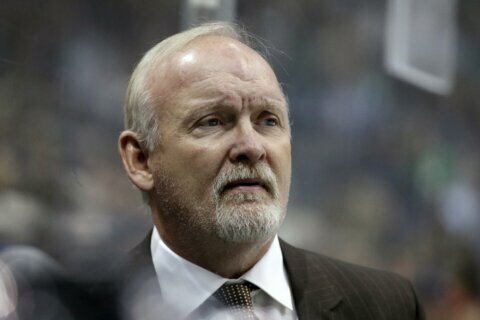