“I think it took me about 300 games in the American (Hockey) League to get a hat trick, too,” Grant said. “It’s a cool feeling for sure, and something I’ll remember.”

John Gibson made 37 saves as the Ducks snapped a five-game losing streak.

Vince Dunn scored and Jordan Binnington made 21 saves for the Blues, who had their nine-game points streak snapped with their first regulation loss since October 26.

“We did have some chances,” Blues forward David Perron said. “We had a lot of shots on net compared to them, but they didn’t result in goals and that means we have to do a better job, either be more in front of the goalie’s eyes or creating more second and third opportunities for other guys.”

Grant’s second of the game thwarted a Blues rally by restoring Anaheim’s two-goal lead with an unassisted short-handed goal at 7:20 of the second. Grant stole Justin Faulk’s pass to create a breakaway and beat Binnington with a backhander between his legs to make it 3-1.

“We start a lot of times in our D zone and that’s the most important thing for us,” Grant said. “Obviously you want to be able to go play and use your offensive abilities and contribute, especially when we’ve been struggling to score goals as a team, so it’s always nice to get that.”

It was the fourth short-handed goal of the season for the Ducks. The Blues have given up three.

Grant finished the hat trick with an empty-netter with 1:39 left.

“That’s big,” Ducks coach Dallas Eakins said. “Derek’s effect on the scoreboard is usually by keeping it out of our net. For him to put three in their net is obviously huge for our group. We’ll take the scoring from wherever we can right now.”

Getzlaf gave the Ducks a 1-0 lead four minutes into the game, finishing on a perfectly executed give-and-go with Max Jones. Getzlaf has 39 points in 42 career games against St. Louis.

“Anytime you score early on the road helps,” Getzlaf said. “You’ve got to take what you can get. Jonesy made a nice play. Even Ricky (Rickard Rakell) on the initial play, he kind of slowed it down and hit me coming late and it worked out for us.”

Grant made it 2-0 at the 5:41 mark, capitalizing on Alex Pietrangelo’s turnover that was caused by Nicolas Deslauriers’ check. It was Grant’s first goal in six games.

“Mistakes are going to happen,” Blues center Ryan O’Reilly said. “Obviously a couple of ones which they capitalized on right away and I think that gave them confidence.”

Dunn got the Blues on the board with a wrister from the top of the right circle for his third goal of the season at the 3:14 mark of the second period.

NOTES: The Blues entered the game 8-0-2 against the Western Conference and were the only team in the NHL to have not lost a regulation game against a Western Conference team. … The Ducks have won four straight in St. Louis dating to Nov. 29, 2017. … Perron, a former Duck, played in his 800th career game and 500th as a Blue. … Jakob Silfverberg and Adam Henrique each had their four-game points streak snapped.

Anaheim: Travels to Washington on Monday. 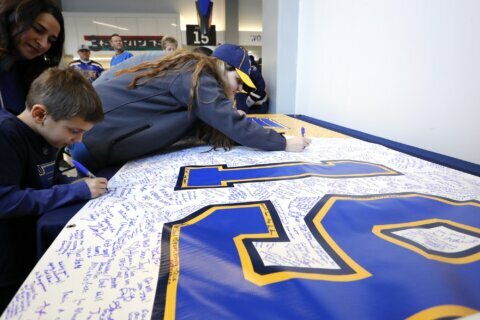 Bouwmeester on the road to recovery, Blues trade for D-man 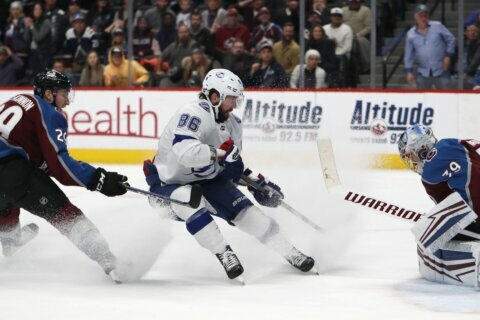 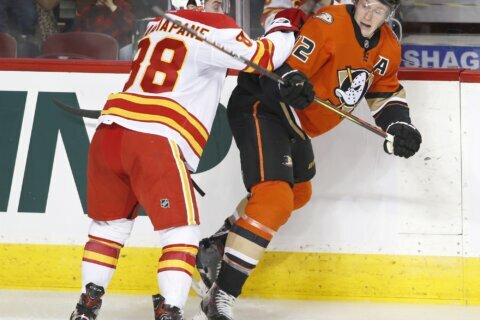