BOSTON (AP) — Charlie McAvoy finally made it to training camp, and the Boston Bruins greeted him with a hearty stick tap salute.

“I didn’t want that,” he said sheepishly on Sunday after returning to the defending Eastern Conference champions for a $14.7 million, three-year deal. “I’m just glad to be back. Tomorrow, hopefully I won’t get a stick tap and I’ll just be one of the guys again.”

A 21-year-old defenseman who has already grown into one of the Bruins’ top blue liners, McAvoy is signed through at least 2021-22. Although negotiations stretched into training camp, which started on Thursday, he said he never wanted to play anywhere else.

“There’s no place I’d rather be to be a part of such an incredible group of men. It’s a blast to come to the rink every day,” he said. “We have a lot of motivation this year. We have something really special with this group.”

McAvoy had seven goals and 21 assists in 54 regular-season games last year, leading the team in ice time — even more than longtime iron man Zdeno Chara — with an average of 22 minutes, 10 seconds per game. He had two goals and six assists in the postseason, when he averaged 24:30 on ice.

“He has a great teacher, as well, in ‘Z,'” coach Bruce Cassidy said.

McAvoy said he has a lot to learn, and “the sky is the limit” for what he and the team can accomplish together. The Bruins have posted back-to-back 100-point seasons, and last year they reached the Stanley Cup Final before losing to the St. Louis Blues in seven games.

“My goal is to go out and become the best hockey player I can be. To grow into one of the best defensemen, hopefully in the league,” he said. “I plan to push myself every single day. I feel like there’s a bit of a window here to do just that.”

The new deal will leave him with two more seasons of restricted free agency, and general manager Don Sweeney said McAvoy would be with the Bruins for three years “and many years moving forward.” McAvoy said he wasn’t interested in squeezing out the franchise’s last penny.

Sweeney said his goal now is to work out a deal with defenseman Brandon Carlo, who is also a restricted free agent. The team has about $3.2 million left in cap space, and Sweeney says that should be enough.

Cassidy, who got a contract extension last week, said he feels fortunate to have McAvoy and the 22-year-old Carlo on defense for the foreseeable future. For now, they will have the 42-year-old Chara as a coach on the ice.

And they’ll be able to take over for the 2009 Norris Trophy winner when he eventually retires.

That has to happen sometime, right? 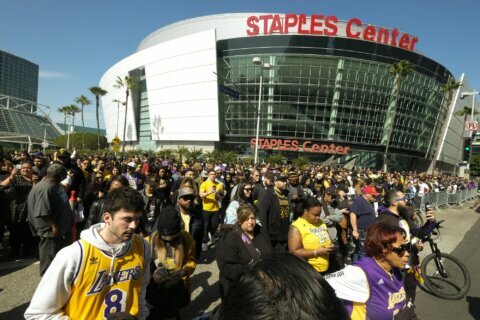