Unaccustomed to losing and no longer a rookie, Dahlin told The Associated Press on Thursday he feels better prepared and is far more driven to help transform the Sabres into contenders.

The first player selected in the 2018 draft is so eager to put last year behind him, he was among the first Sabres players to hit the ice at the team’s practice facility, some three weeks before teams open training camp. He arrived in Buffalo from his native Sweden on Tuesday, and would have been back in town a few days earlier if not for travel complications.

The rookie of the year finalist is motivated after how Buffalo unraveled immediately following a 10-game winning streak that had the team briefly sitting first in the overall standings at the end of November. The Sabres then won just 16 of their final 57 games to miss the playoffs for an eighth straight season, the NHL’s longest active drought.

“We played so well in the beginning of the season, so that made you frustrated because we know how good we can play,” he said. “Yeah, we’re going to get something good going on here.”

Expressing unhappiness and acknowledging frustration is new for Dahlin, who spent much of last year looking mostly at the bright side. When asked late last season if Buffalo’s 49 losses (including overtime and shootouts) were the most he ever endured in one year, Dahlin smiled and responded by saying the team’s 33 wins were also a season-high for him.

A year ago, Dahlin was expressing hope he’d simply make the season-opening roster. Now he’s begun to find his voice as a key member of the team.

“I feel more prepared. I feel more mature,” said Dahlin, who turned 19 in April. “Like that one year of experience, I know what’s coming this season. I feel more comfortable in my position.”

He said he spent much of the summer adding weight and strength to better handle the rigors of an 82-game schedule and face elite opposition.

Dahlin’s rookie season mirrored much of that of his team when it came to inconsistency. He had a goal and eight assists during the 10-game win streak, but followed with two goals and four assist over his next 17 games.

Though he led Sabres defenseman and finished third among NHL rookies with 44 points (nine goals, 35 assists), he closed the season with a goal and six assists in Buffalo’s final 19 games.

Dahlin showed some rust Thursday, when the usually smooth-skating player took a spill — “Oh, yeah, I slipped,” he said — while being untouched at the blue line. He bounced back a few moments later, when he drove in from the right point and converted Jason Pominville’s no-look pass for a goal.

Declaring himself ready to go, Dahlin already had his first face-to-face meeting with new coach Ralph Krueger on Wednesday.

“He seems like a really good coach and a good man,” he said of Krueger, who takes over after Phil Housley was fired following two sub-par seasons. 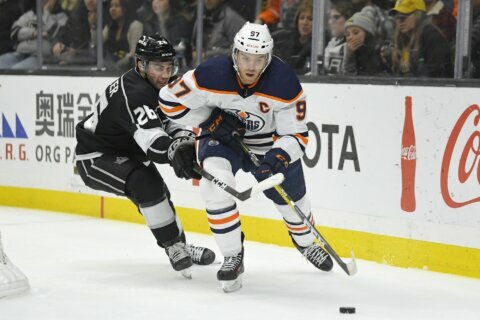 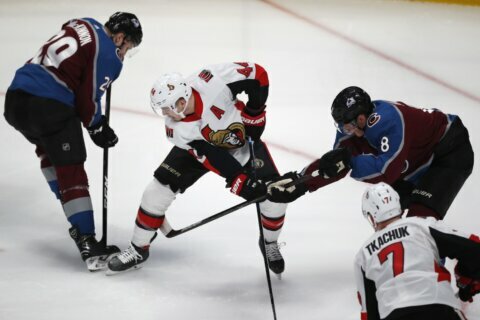 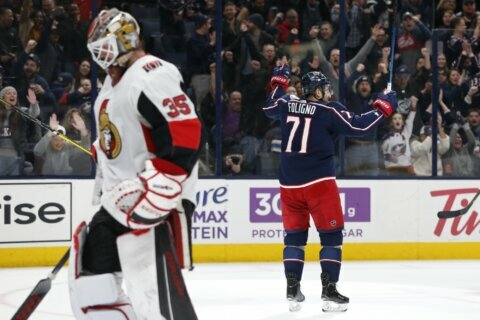