Arizona Cardinals rookie quarterback Kyler Murray went 6 for 7 for 44 yards in the 10 plays of the Cardinals’ first offensive series of the game.

Then he put on a headset, took off his pads and watched the Cardinals’ 17-13 win over the Los Angeles Chargers in the preseason opener for both teams Thursday night.

The 2018 Heisman Trophy winner, starting his first NFL drive at the Cardinals 2 after a fumble recovery, picked up three first downs, with his longest completion a 14-yard short pass to running back David Johnson.

The Cardinals did, however. Trent Sherfield, who had 19 catches a season ago after making the team as an undrafted free agent, hauled in a 22-yard touchdown pass from backup quarterback Brett Hundley 35 seconds before halftime to tie the score at 7.

Zane Gonzalez hit a 55-yard field goal and Wes Hills ran 7 yards for a touchdown in the second half, and the Cardinals held on in new head coach Kliff Kingsbury’s NFL debut. Easton Stick, the third quarterback for the Chargers, scored on a 31-yard scamper in the fourth quarter.

Tom Brady and Matthew Stafford didn’t play, and plenty of other key players were also spectators. Myers stood out for New England. The undrafted rookie caught scoring passes from Brian Hoyer and Jarrett Stidham in the second quarter. He finished with six catches for 69 yards.

Super Bowl MVP Julian Edelman (thumb) has been sidelined for the Patriots, and Phillip Dorsett is the only other returning receiver. Meyers seems to be taking advantage of his opportunity.

Lions receiver Jermaine Kearse was carted off injured early in the first quarter, and that was the start of a dismal night for Detroit. The Lions didn’t cross midfield until the latter half of the fourth quarter, when they finally drove for a field goal. The Patriots sacked Detroit quarterbacks nine times.

The Lions finished the third quarter with only 41 net yards — and minus-11 passing.

Lions coach Matt Patricia has been moving around on a vehicle at practice while recovering from surgery on his left leg. He did coach this game from the sideline, perched behind a handful of coolers near midfield, a safe distance from the field.

The Jaguars played without quarterback Nick Foles, the 2018r Super Bowl MVP who was signed as a free agent in March. Foles was one of 32 players who were either injured or rested by coach Doug Marrone in the preseason opener, which came after the teams held two joint practices earlier in the week.

Jackson played the first quarter and went 4 for 6 for 59 yards and a touchdown.

With Foles on the sideline, Minshew, drafted in the sixth round out of Washington State, proved to be fodder for a defense that last year was ranked No. 1. Minshew lost his helmet when struck on a first-quarter foray out of the pocket, and in the second quarter he got hit a whole lot harder after mishandling a snap. Minshew quickly picked up the ball, just an instant before Kenny Young swooped in untouched and applied a crushing tackle that separated the quarterback from his helmet — again.

Minshew was mercifully lifted after going 7 for 14 for 46 yards.

ORCHARD PARK, N.Y. (AP) — With LeSean McCoy resting, and Frank Gore limited to two series, rookie running back Devin Singletary got the Bills off to a running start .

On Buffalo’s fourth drive, Singletary showed off the shiftiness that led to the Bills drafting him in the third round. He accounted for 16 yards rushing and 21 receiving as part of a 46-yard drive that ended with Matt Barkley hitting Cam Phillips for an 8-yard touchdown pass to open the scoring 5½ minutes into the second quarter.

The Colts struggled on offense while sitting out numerous starters, including starting quarterback Andrew Luck, who is nursing a strained left calf. Backup Jacoby Brissett finished 2 of 5 for 21 yards over three series, with both completions to offseason free-agent addition Devin Funchess.

CLEVELAND (AP) — Baker Mayfield threw a touchdown pass to end his only series as the Browns gave a brief preview of their offensive firepower.

Mayfield picked up where he left off following his “dangerous” rookie season, firing a 24-yard TD pass to Rashard Higgins as the Browns went no-huddle and drove 89 yards in just 2:13 to open the game.

They did it while Odell Beckham Jr., the Browns’ major offseason acquisition, was kept on the sideline along with Pro Bowl receiver Jarvis Landry by first-year coach Freddie Kitchens.

Case Keenum, in a three-way competition with Colt McCoy and rookie Dwayne Haskins, started and threw a 46-yard TD pass — thanks to a miscommunication by Cleveland’s defense — to receiver Robert Davis in the first quarter. He finished 4 of 9 for 60 yards.

Haskins completed a 27-yard pass on his first attempt. However, he badly underthrew a pass in the second quarter and was picked off by rookie linebacker Mack Wilson, who returned it 40 yards for a TD.

PHILADELPHIA (AP) — The Philadelphia Eagles rested Carson Wentz only to lose his backup.

Nate Sudfeld left the sideline on a cart after injuring his left arm on a late hit in the second quarter. Sudfeld fell backward after a personal foul by Isaiah Mack and immediately went to the sideline. He was wearing an air cast on the cart ride to the locker room. There was no immediate word on the extent of his injury.

MIAMI GARDENS, Fla. (AP) — Josh Rosen threw for 191 yards and directed three scoring drives of more than 60 yards. Rosen went 13 for 20 with no touchdowns and one interception and played half the game. He’s competing for the quarterback job with veteran Ryan Fitzpatrick, who worked the first two Dolphins series and led them to a field goal.

Atlanta backup Matt Schaub threw for 172 yards and led the team to four scores in the first half. Schaub went 12 for 19 with no touchdowns or turnovers for the Falcons (0-2), who have lost 10 consecutive exhibition games since 2017.

Undrafted Preston Williams, who has been Miami’s best rookie in training camp, had four catches for 97 yards. That included a one-handed catch for a 36-yard gain.

EAST RUTHERFORD, N.J. (AP) — Daniel Jones threw a touchdown pass in his only series and opened speculation on how long he will have to wait to replace Eli Manning.

The preseason opener for both teams was suspended for 59 minutes late in the first quarter when lightning and heavy rain rolled into the MetLife Stadium area. By that time, Jones had Giants fans on their feet.

Taking over after Manning had a three-and-out series, the sixth pick overall in the draft hit all five of his passes, the final one a perfect 12-yard throw to Bennie Fowler III in the right corner of the end zone.

Sam Darnold and the Jets had looked just as good on their opening series for new coach Adam Gase, going 75 yards in seven plays against a defense that many think is the Giants’ weak link. Darnold hit passes of 32 and 28 yards before finding Jamison Crowder from 3 yards.

SEATTLE (AP) — Paxton Lynch threw for one score and ran for another against his former team as part of an impressive second-half performance, leading Seattle over Denver.

Competing with Geno Smith for the backup job behind Russell Wilson, Lynch made up for some shaky moments during the first two weeks of training camp by leading Seattle on a trio of second-half scoring drives using both his arm and legs to move Seattle’s offense.

Lynch was 11 of 15 for 109 yards and added another 38 yard rushing. He hit 6-foot-5, undrafted free agent Jazz Ferguson on a 6-yard TD in the third quarter, and added a 9-yard touchdown run in the fourth quarter by bulling through Denver defenders at the goal line.

Lynch was a former first-round pick of the Broncos in 2016, only to be released before the start of last season and spent the year out of football.

Joe Flacco made his Denver debut, although it was a brief appearance for the Broncos’ starting QB. Flacco played just one series and completed 3 of 4 passes for 19 yards before turning it over to backups Kevin Hogan and a lengthy look at rookie Drew Lock.

Slye made field goals of 42, 55 and 29 yards and the Panthers had a 7-yard touchdown catch and 11-yard TD run from rookie Elijah Holyfield.

The Panthers already have a standout kicker in Graham Gano, and it’s possible Slye put himself on the radar of the Bears as well as other teams seeking a kicker by hitting a second-quarter kick of 55 yards for a 6-0 lead. The former Virginia Tech player made a 29-yarder in the third quarter to expand Carolina’s lead to 16-10. Slye’s 42-yarder came on Carolina’s second possession to open the scoring.

The Panthers’ defense kept the Bears in check much of the game, with Marquis Haynes and Brian Burns each getting two sacks.

GREEN BAY, Wis. (AP) — DeShone Kizer was 8 for 13 with 102 yards and a touchdown. Tim Boyle added two second-half touchdown passes for the Packers as Aaron Rodgers had the night off.

With Deshaun Watson not playing and A.J. McCarron sidelined with a thumb injury on his right throwing hand, Joe Webb, the only other quarterback on the Texans’ roster, played the entire game. The 10th-year veteran was 25 for 40 for 286 yards a touchdown and two interceptions.

The Texans rallied with 16 points in the fourth quarter, but fell short. 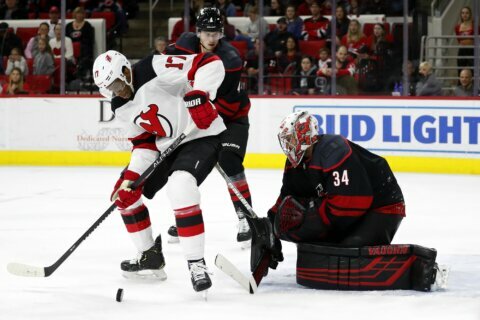 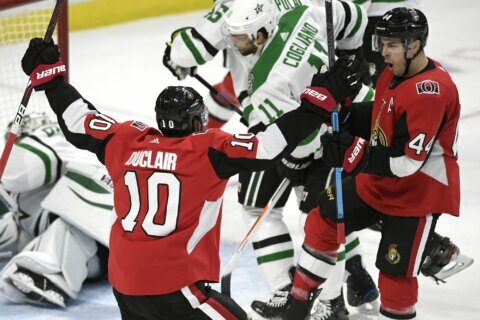 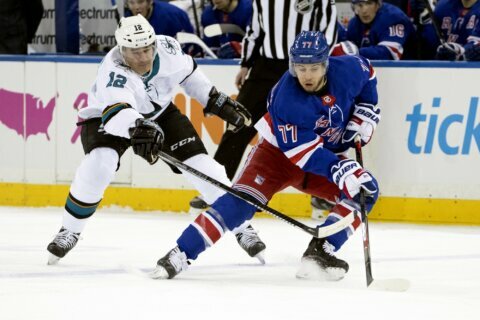